Second year BA Painting student, Annie-Marie Akussah, was recently chosen to be a part of Artquest’s The Artist’s Pavilion at the 57th Venice Biennale. The Artquest programme at University of the Arts London (UAL) helps to support professional visual artists in London, with online advice and information, internships, international studio exchange, legal advice and more.

Annie-Marie was selected to be part of a curatorial team involved in selecting and organising works for the pavilion, as well as running events and workshops. We spoke to Annie-Marie about her experience working at the Venice Biennale, her artistic practice that aims to raise awareness of marginalised groups and her upcoming trip to Tanzania to work with people with albinism.

How did you get involved in Artquest’s The Artist Pavilion at the Venice Biennale?

There was a callout for artists on the UAL website so I decided to apply for it! I had to fill in the criteria form and write an essay explaining why I wanted to partake.

The title of the Biennale for this year was ‘Viva Arte Viva’, and the message was all about the voice and the responsibility of the artist in today’s world. I just felt it really represented the state that the world is in now and these sorts of themes really relate to my work.

I was so excited by the fact that I was going to be a part of the “real art world”, in a way, with established artists making work responding to the themes that I also respond to in my work. I really wanted to engage with other artists, and see how artists engage with each other and how they work within spaces outside of where they usually practice. I also really wanted to meet lots of different artists from different backgrounds. I was so happy when I was selected to be part of the programme. What did you have to do as part of the programme?

I worked on curating, running workshops and invigilating. As a group, the other students and I were asked to select artists that we wanted to work with, so we looked through the CVs of the artists that applied for the programme and tried to make it as fair as possible. Once we had selected the artists, we were able to create the programme.

We were in Venice for five days and we had a programme for each day. The whole programme involved running workshops, talking about the artwork to visitors and invigilating. We ran a sign-language workshop that was really great. The artist we worked with on that was called Lara Malacart and her work is centred on global commerce and language, so we were brainstorming an innovative way to encourage people to interact with her work. We were in this bubble talking about art every day, which if you’re not an artist can get a bit boring, so we tried to step out of that. We brought in a person who was deaf to run a sign-language workshop and he brought a translator.

It was my first experience with curating and working with a curator. That’s another reason why I wanted to participate because I didn’t really understand the role of a curator before, but I’ve realised now that they do so much and they’re so knowledgeable. This was my first time getting a taste of that and it will definitely benefit my practice in the future. 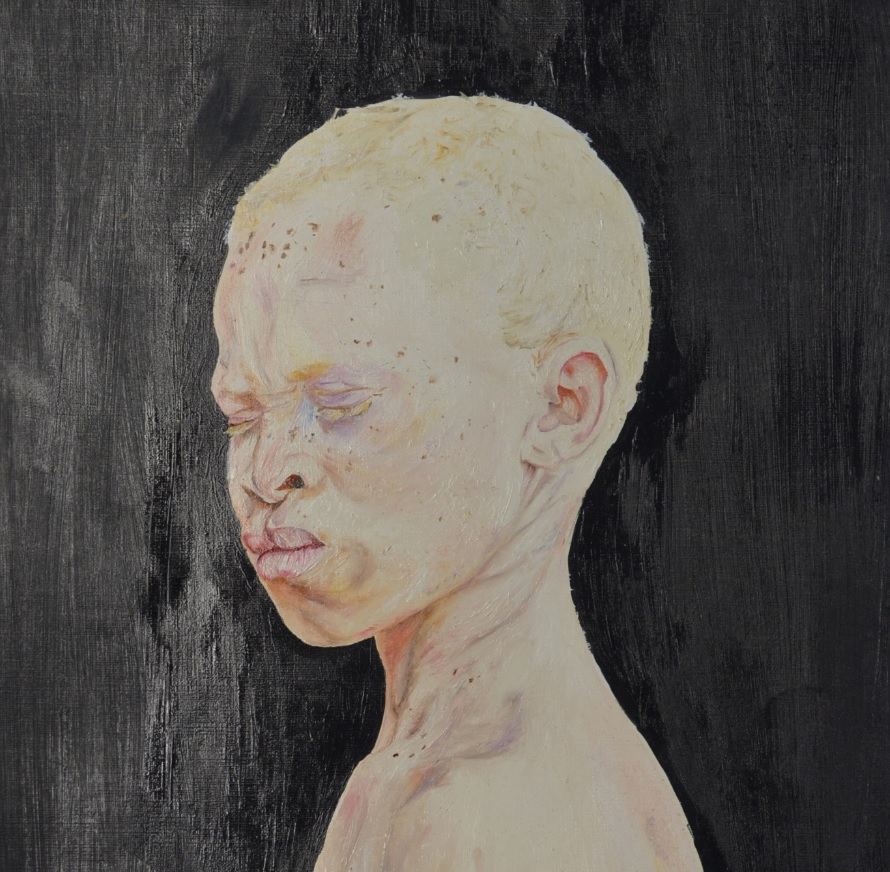 Can you talk about your practice?

I do mostly make paintings, but I am starting to make a little bit of film and collage. My work is about marginalised people, which can refer to any situation but in the past it’s been about people with albinism and the killings of them in Africa. Quite recently it’s been more about the notion of belonging and migration, and the refugee crisis. It’s mostly about people that have been negatively affected in one way or another and I just want to raise awareness or create a space where people can have a discussion. My work often involves using found materials.

What have you enjoyed most about the BA Painting so far?

I’ve enjoyed a lot! The first year was a bit of a struggle for me because there was so much going on and I was quite overwhelmed. Throughout my second year I have really enjoyed the process and having a lot of time to discover myself as an artist, experimenting with different things. Also, the lectures are amazing. That’s one of the best things that Wimbledon has to offer.

When I walk into College every day, I make sure I walk around all the other studios before going to my studio, because there’s so many incredible artists who make amazing work that is so inspiring. It might not be about the same subject matter as your own work, but there’s something in it that will grab you. For example, an Erasmus student a few months ago came to Wimbledon and shared my studio space with me. The way she made work had a huge impact on me and we learned so much from each other. She taught me how to stretch a canvas very tightly. The whole studio environment is amazing and helps you to learn more about yourself. 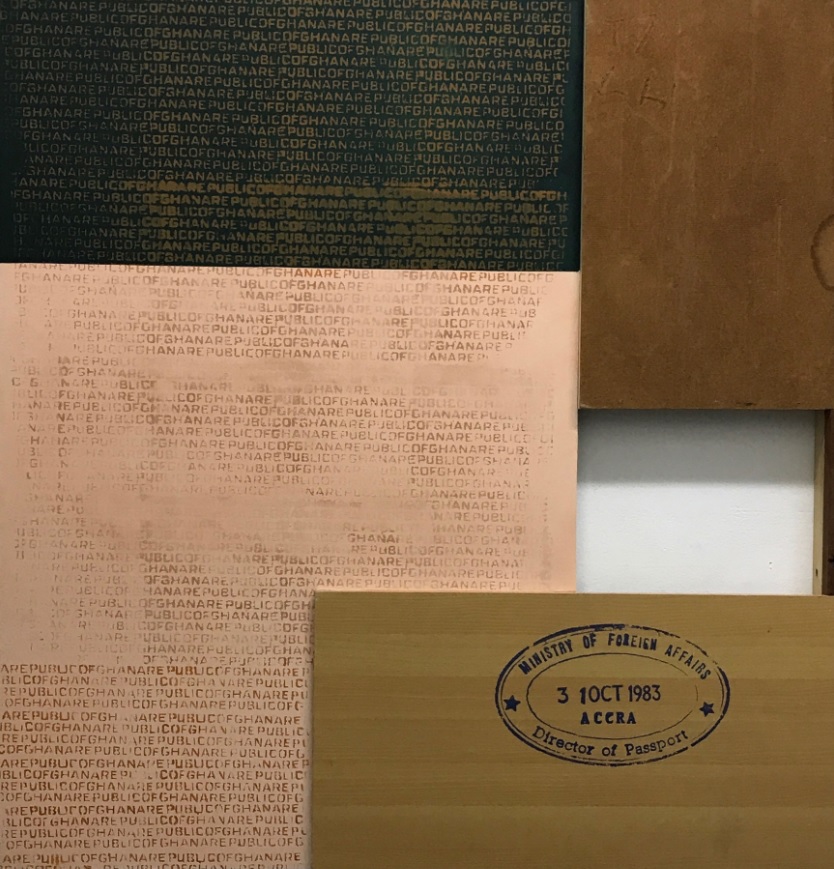 What made you want to study at Wimbledon?

I didn’t really know much about art schools before coming to Wimbledon. I did do a Foundation, at the Working Men’s College in Camden. It was a bit of a random chance, because I was doing art in school but I never thought I could do art at university level. I always thought I would go to a regular university because I was playing basketball at the time, so it was a trial and error thing.

Tell us about your upcoming art workshops in Tanzania

I am going to run a workshop in Tanzania as part of my practice. I make work about marginalised groups of people, and at the moment I am focusing on people with albinism. I’m going to use what I’ve learnt in my workshops at the Biennale to help to deliver a series of workshops.

This is an initiative that I organised myself. In my first year I was making paintings inspired by a film called ‘In the Shadow of the Sun’ by a producer called Harry Freeland, who also runs a charity in Tanzania. I started making work about people with albinism ages ago and I knew I always wanted to go to Tanzania and work with them. I wanted to engage with them somehow because a huge part of my practice is engaging with the people I am inspired by somehow. I can’t just sit somewhere and make work about people when I have no dialogue with them and I don’t know them – I think that’s quite unfair. 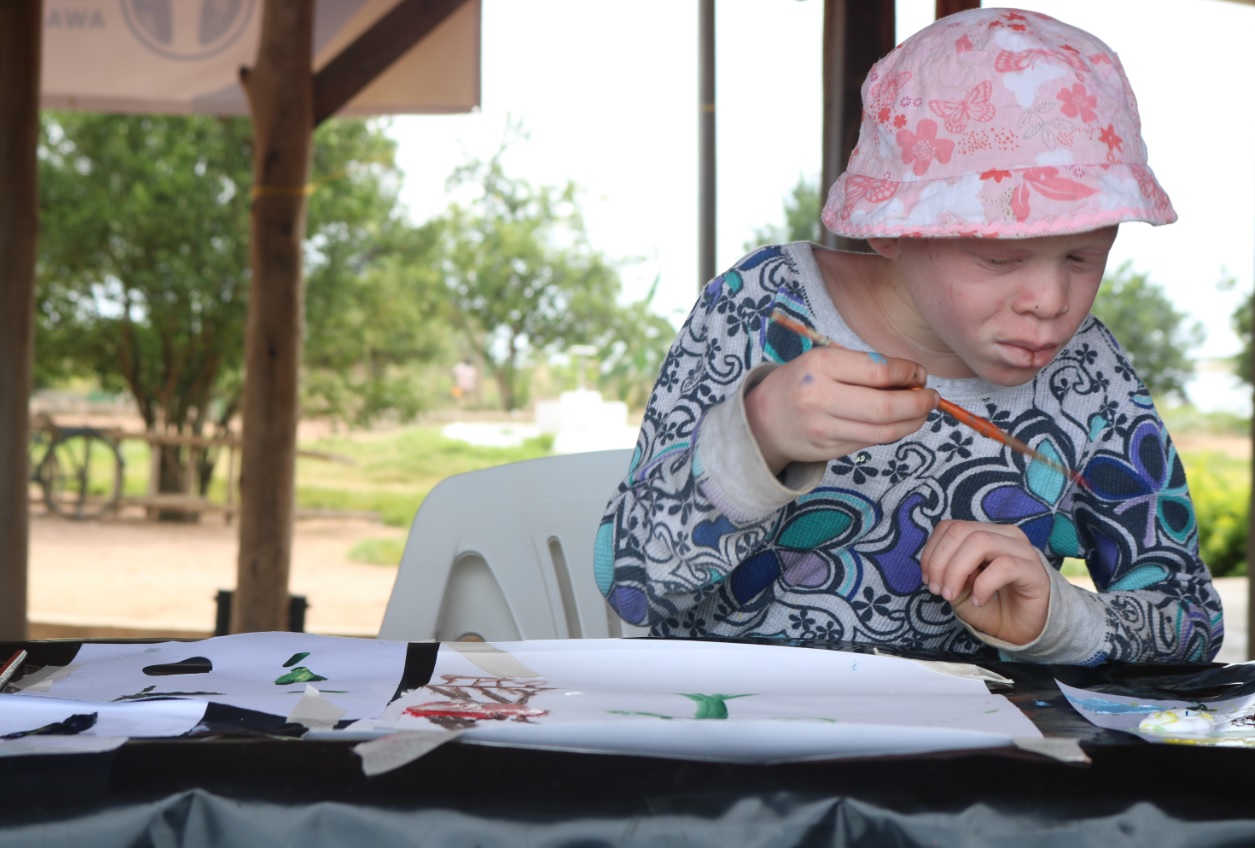 A few months ago, the charity had a call out for creatives who could teach these groups of people something creative that they could do in their spare time, so I emailed them and that’s how it all happened.

I am going for two weeks to run a painting and collage workshop with a group of people with albinism around World Albinism Day. The workshops are actually going to be across one week and then we will have an exhibition at the end. The plan is to make work with these people and bring some of it back so I can then make work as a response to it. I’m really looking forward to it.

These last few months have been ridiculous for me! The most amazing things have happened, like getting to go to the Venice Biennale and my work was also featured at the Affordable Art Fair here, so I feel very lucky. I was also this year’s recipient of the Made in Arts London (MiAL)/Cass Art Materials Bursary, so I am using that money for materials for the workshop.

Learn more about Annie-Marie and her work by following her on Instagram.

Find out more about studying BA Painting at Wimbledon College of Arts.