Roger Ackling sadly passed away last week, 5th June 2014. An integral part of Chelsea College of Arts, Ackling influenced generations of artists, having taught many of the students and now staff members of Chelsea.

Born in 1947 in Isleworth, London, Ackling studied at Saint Martin’s School of Art in the 1960s alongside British artists Richard Long and Hamish Fulton.  He became a sculptor known for transforming discarded scraps of wood into thoughtful intimate sculptures.  Channelling natural sunlight through a hand held magnifying glass, Ackling would burn delicate geometric shapes upon everyday wooden implements, ranging from clothes pegs, spades, clothes hangers to found driftwood. Focusing on the process of making, he described his work as: “I’m not a symbolic artist; it is what it is at the time of making it.” 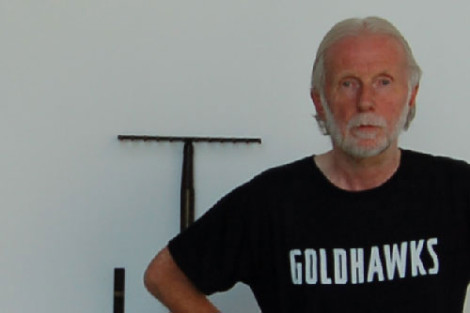 “The outstanding thing about Roger as a teacher was his generosity. I’ve never heard so many responses from students saying that the best tutorials they ever had were with him. He loved teaching. He had an incredible capacity to respond to students work in a very personal way; they felt understood and encouraged.

He was greatly loved.

I’d been an undergraduate in the same year group as Roger at St. Martin’s; taken on a year earlier than usual – he showed such talent! When I was appointed as Course Director on the BA Fine Art at Chelsea and proposed radical changes to the structure and curriculum he came to me personally telling me he didn’t like them but would support them 100% for one year; if after that he was still opposed to them he’d resign. Luckily for me and for our great team he announced at the end of that year that he welcomed and embraced the changes. That was typical of Roger; he was always fully committed to whatever he did in life.”

Ackling also exhibited frequently in the UK and Internationally. In 2011, he exhibited at Chelsea Space alongside Chelsea College of Arts Summer Show. Director of Exhibitions at Chelsea Space Donald Smith curated the exhibition ‘Roger Ackling: Down to Earth’ and remembers this time:

“He had a generous, inquiring and somewhat mischievous personality and was much loved by all. When he was first diagnosed with Motor Neuron Disease he decided to retire, he then came to me with a very specific request that he would like to exhibit at CHELSEA space at the same time as the BA graduation show so that he could stand shoulder to shoulder with his students and have his work ‘examined’! I will treasure the time we spent installing the exhibition, the resulting installation was very memorable and perfectly poised. The private view was a very happy event and a great tribute to the artist and the man with a remarkable roll call of current and former students, art school colleagues and art world professionals. He will be missed by his many friends and our thoughts are with his wife, Sylvia.”

A key British sculptor and astounding educator, he will be greatly missed by all who knew him.