New York multi-media artist Roberto Visani is currently undertaking a residency at Chelsea and Wimbledon as part of a unique artist-in-residence programme established in partnership with New York Foundation for the Arts (NYFA). The residency aims to give New York based artists an exciting opportunity to work in central London alongside the colleges’ staff and students.

Roberto, who has exhibited internationally in venues such as New York’s New Museum of Contemporary Art, Barbican, London and Ghana National Museum, will spend four weeks at Chelsea and Wimbledon, during which time he will deliver lectures and workshops for Fine Art students as well as undertaking his own research and practice.

Here at Chelsea, he has been working closely with Patricia Ellis – an artist, art writer, consultant and curator whose research spans all areas of contemporary art and who joined the college from Camberwell in January as the new Course Leader of MA Fine Art.

We invited Patricia to speak with Roberto about his new work, survivalism, and the potential of firearms as a new social model. 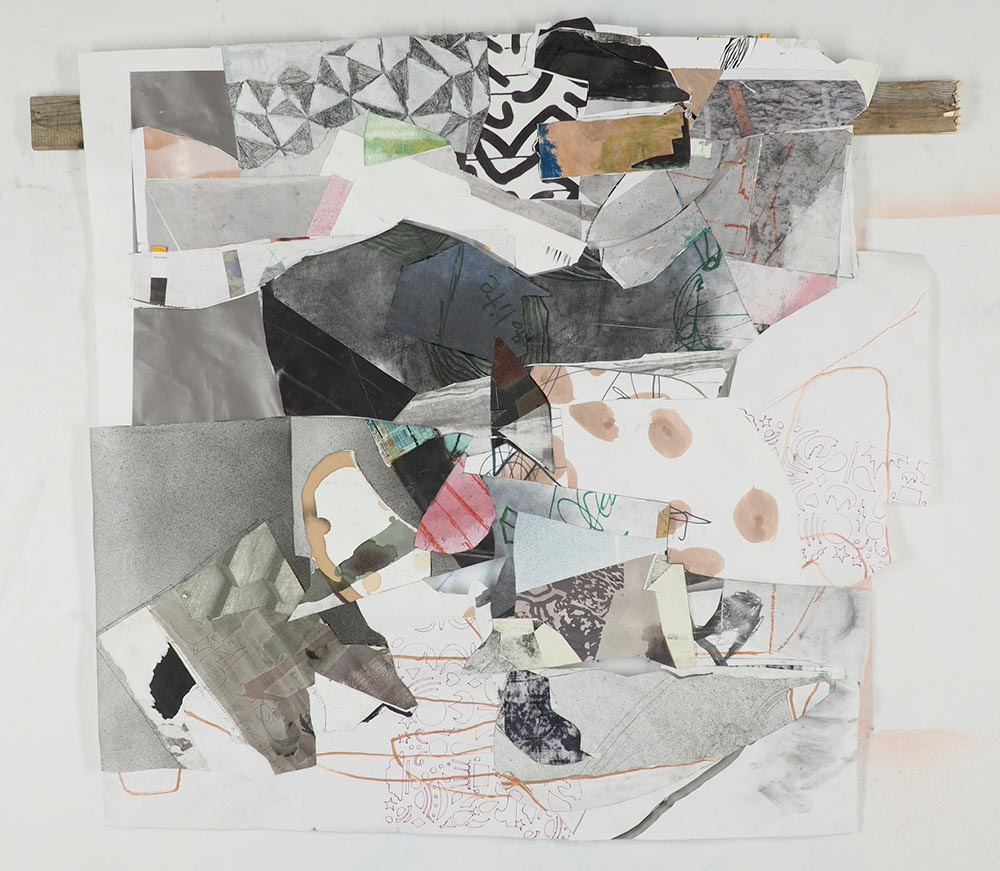 Patricia: I’m so excited you could join us this year as the artist-in-residence at Chelsea and Wimbledon. How has it been for you so far in London? And what are you working on while you’re here?

Roberto: It’s been very exciting. People here are very nice. It’s so great to be at a world leading art school and see what the students are doing, what the faculty are doing, and be able to take advantage of some of the resources. So far I’ve been able to interact with the students at the Chelsea and Wimbeldon campuses through lectures and workshops, as well as informally. They impress me as being very committed to their studies and really open to new possibilities in their creative practice, which I think is essential.

I have a varied practice, so I do drawing and sculpture – it’s conceptually driven and shaped by circumstance. Because of the time frame, I decided to create collages while I’m here, which is a way I intuitively respond to a situation. These works negotiate a dialogue between figure and ground through the translation of texture, color, media, etc., and have a loose relationship to the reformation of identity which is something that comes up throughout all my work.

P: You’ve got a big show coming up in America quite soon?

R: I’m going to be in the Joshua Triennial, which happens in California, in Joshua Tree National Park. I’ll be doing a large site-specific piece there; it’s an architectural sculpture. I’m working primarily with bamboo to make a linear form that will respond to the landscape.

Being resourceful is important to my work. Especially looking at materials and processes that are fairly accessible, hence collage, assemblage, and, in this, case bamboo. Buckminster Fuller is an inspiration for this piece. However, whereas Buckminster Fuller’s work is fairly systematic, my process is very much spur of the moment with decisions based on the length of the bamboo forms. How they’re connected together ultimately determines the interior and effects the overall form of the work.

I like to think about the ‘lowest common denominator’ sometimes, as a means to generate ideas. So I thought about forms like a hut or pyramid, these simplified iconic yet abstract architectural structures. And within that, how could I complicate it through improvisation. I was also thinking about these shelters that people have to make after a storm or a hurricane where people have to work with the materials they have locally in order to create something. 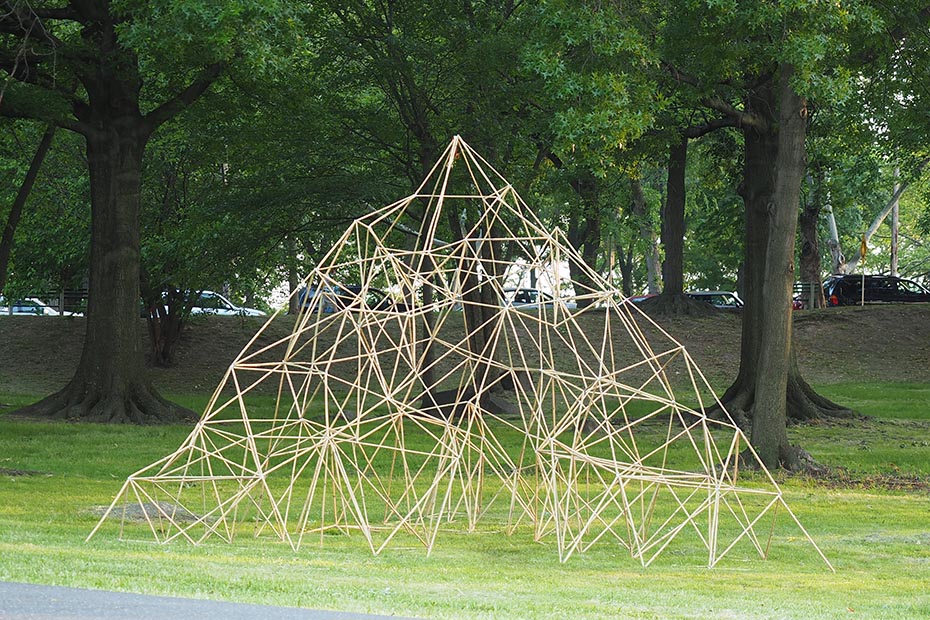 P: This notion of efficiency or re-purposing is really core to your practice. Throughout your work there’s a sense of immediacy to the materials you use – and there’s an optimism of attainability that’s inherent to that. It’s maybe a kind of positively focused ‘survivalism’ – a proposal for a more sustainable way of being. I’m very interested in art’s potential to envision a future: to open up new dialogues, new ways of working, provide alternatives to the current modes of market-orientated production. I’m very curious about your concept of adaptability in relation to this.

R: Me too, I like to think about it like access. Are the ideas accessible – are the tools, materials, process accessible? Its empowering to think of our surroundings in this way. When I was at art school, I was looking at Arte Povera artists, American artists like David Hammons, Jimmie Durham, and Robert Rauschenberg, and how the work would reflect the economic, cultural and historical circumstances they were linked to.  And then, after I finished school, I went to Africa – and the same kind of thing was happening, but it wasn’t necessarily for art. It was out of necessity. When you are placed in a particular situation where you don’t have resources, that can be a real catalyst to be more creative. That was the biggest thing I took away from my time there.

The other thing that I was really interested in when I was in Ghana was how traditional works were ‘functional’. Some of them were functional in a practical sense – a ceramic drinking cup would have some kind of pattern on the outside that would have a proverbial meaning. Or bronze weights used to weigh out gold. But other things would be more esoteric or have a spiritual function. So I thought about my own practice from that point of view, and thought about what are the important questions that I have. The work is asking those questions. So in that sense, it’s solving a problem. Maybe a personal problem, maybe a social problem that I have. Not in the sense that it’s giving me a coherent answer or that I’m necessarily thinking of making an art object, but it’s helping me to reconsider the issues involved. I’m engaged in a process that is going to help me understand my surroundings and, potentially, my past and future. And that results in some kind of an object. Most of the time. Sometimes it doesn’t. But it’s always a process. 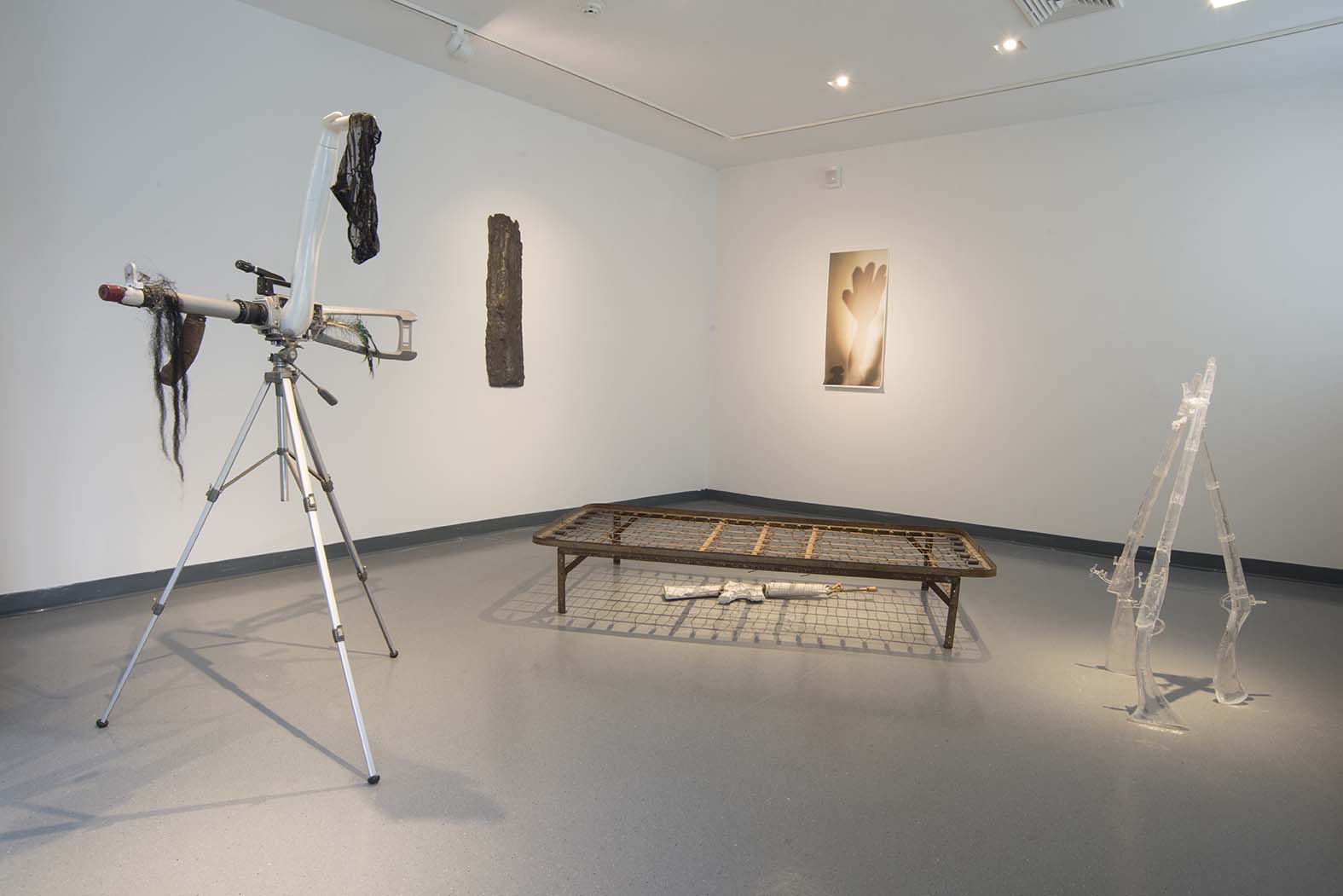 Installation view of In Medias Res, at Guttenberg Arts, 2015. (l to r) sex tape, exo sis, dream and lie, shadow study, half the story has never been told.

P: Your work is very engaged with history – comparative history in particular. This emerges clearly in your materials and processes – but I think most interestingly in your subject matter, which often features firearms as a means to provoke open discussion around our contemporary condition as local and global citizens – rural, urban, multi-cultural; to question and position ourselves in relation to our histories; and to challenge current social and political situations. There’s a genuine fluidity between all elements and reference points that facilitates uneasy reconciliations.

R: Guns are interesting to me for several reasons. First of all, I grew up hunting with my father so I understood their construction from early on. They create an interesting power dynamic of me/you or us/them. They are ergonomic so, in a sense, they mirror the body. They are historical, often culturally specific, and have shaped the course of history. So all these things are considered within this series of work.  And in a way, I imprint my personal history on them. My father is Italian and I was born in Italy. I lived for a couple of years as a child in New York, but for most of my childhood I grew up in the American Mid-West, in Minnesota and South Dakota. My mother is from Trinidad. So I had this mixture of cultures growing up between a rural mid-western culture, which is fairly conservative in the U.S., and a big cosmopolitan city. And obviously, I would visit my mother and father’s sides of the family: in a very traditional town in Italy and a large, vibrant city in Trinidad. So the assemblage nature of these works attempts to reconcile some of these questions of difference of time and place.

I think I’ve been really fortunate to have the experience that I have because, depending on where I’ve lived in the United States, people saw my identity as being something different. It sort of forces you to remake yourself based on your circumstances – perhaps in relation to a core understanding of who you are and what your person is at the same time. Whether you’re working for a Fortune 500 company or hanging out at your friend’s house after school, combined with this idea of your family history and your geography, all these things become an amalgam. We’re sort of multiple people all at once.

Translation is very important to me. How language and gestures are translated. When it comes to art, that idea gets transposed onto materials and transposed onto process, so how is one process translated into another? If I’m doing something with a camera, how is that translated to doing something in print-making? Or doing something on a computer or with cast metal? And then how is one material translated into another? Whether it’s collage or assemblage, how do these things ‘talk’ to one another? And that’s the experience I kind of had growing up. This duality, we all have it. And I think this is a subtext in my work. We need to get better at adaptability. It’s a necessity. It’s part of living in the world.

Roberto Visani will be exhibiting his work at the new MA Fine Art: Chelsea Gallery (Room A203) from 5-8pm on 13 March. All UAL staff and students welcome.