London Fashion Week kicks off again in the capital this week, and as part of the busy and exciting programme of events taking place across the city, Chelsea BA Textile Design alumna and knitwear designer Helen Lawrence will this year be showing a guest film as part of the BFC Fashion Film event in association with River Island.

Helen’s work is instantly recognisable – her unique multi-textured knitwear is stocked internationally at stores such as Selfridges, Dover Street Market and Opening Ceremony.

Since she graduated and launched her fashion career, she has returned to the college twice to show her collections as part of London Fashion Week – most recently to showcase her Autumn/Winter 2016 collection.

We wanted to find out more about her intriguing, sensual work, so we caught up with her this summer as she arrived back home after a busy trip to Paris, to hear about the unusual inspiration for her most recent collection.

“I thought from a young age that I wanted to study fashion” says Lawrence down the phone from her home in London, having just got off the Eurostar that morning. “I had always assumed I would go straight from school to my local University, Northumbria, to study womenswear, but towards the end of my A Levels I started to question that. I was worried that maybe there was something else I’d miss out on.  While I do appreciate it, rather than simply finding a beautiful wool and making a tailored jacket, I was always more interested in manipulating fabric and its surfaces and textures.”

“At the last minute I decided to do an art foundation course and after a lot of experimentation all of my tutors agreed I was more into construction and printing fabric, so I decided that studying textiles would be the best route for me.”

It seems that these early days were a real time of discovery for Lawrence. “I’d never knitted before!” she explains, looking back at her early days on the Textiles course. “When I arrived at Chelsea I actually thought I was going to be a printer, but when I tried it I decided that was it for me, I was going to knit.”

Students on BA Textiles at Chelsea each have the opportunity to explore a variety of textile areas including design for digital print, dyeing, knit, screen print, stitch and mixed media textiles before specialising in one technique.  Lawrence describes “I think I went into it totally blind but it felt right – I knew that somewhere along the line I wanted to put my textiles into clothing – I really enjoyed knitting and it seemed like the best fit if I were to put fabrics into fashion.”

Lawrence knew that her next step was to study for a fashion qualification at postgraduate level and once she left Chelsea she got a place on the prestigious MA Fashion at fellow-UAL college Central Saint Martin’s.

When asked how she discovered her signature style which mixes textures, yarns, stitches and shapes, she puts it down to trial and error coupled with instinct. “I think I have always experimented with lots of different things – Chelsea was no different!  Once I was on my MA I did so many different projects, playing with techniques – it was a very instinctive approach.”

The results have been a series of collections that push the boundaries of knitwear and have been described by Style.com as “charmingly off-beat”.  Her latest offering appears to have a darker edge, but features such as subtle, surprising cut-outs, unusual silhouettes and contrasting textures remain.

“This season is a development from the season before – every season is.” Lawrence explains. “Working on this collection was about pushing the stiches that we’ve used before to a new place and finding different ways of showing the body subtly.  The look is sexy but not SEXY – we wanted the tight sections of the garments to sit in different places on different bodies, which changes the look depending who wears them.

“I am always inspired by weird shapes and strange colour combinations, but for this collection we also looked at body painting.  You can get organic, abstract shapes from painting and pressing a body against a surface. To create the prints I actually painted my assistant!  We made different prints and had them put into jacquard and intarsia knits with lambs’ wool and mohair in quite commercial shapes.

“We also looked at a 1970s fetish magazine called Atomage which features people in their own houses in their fetish gear with the curtains drawn, with floral carpets. It’s all quite awkward, uncomfortable but interesting.  We wanted that same feeling to be in the clothes.” 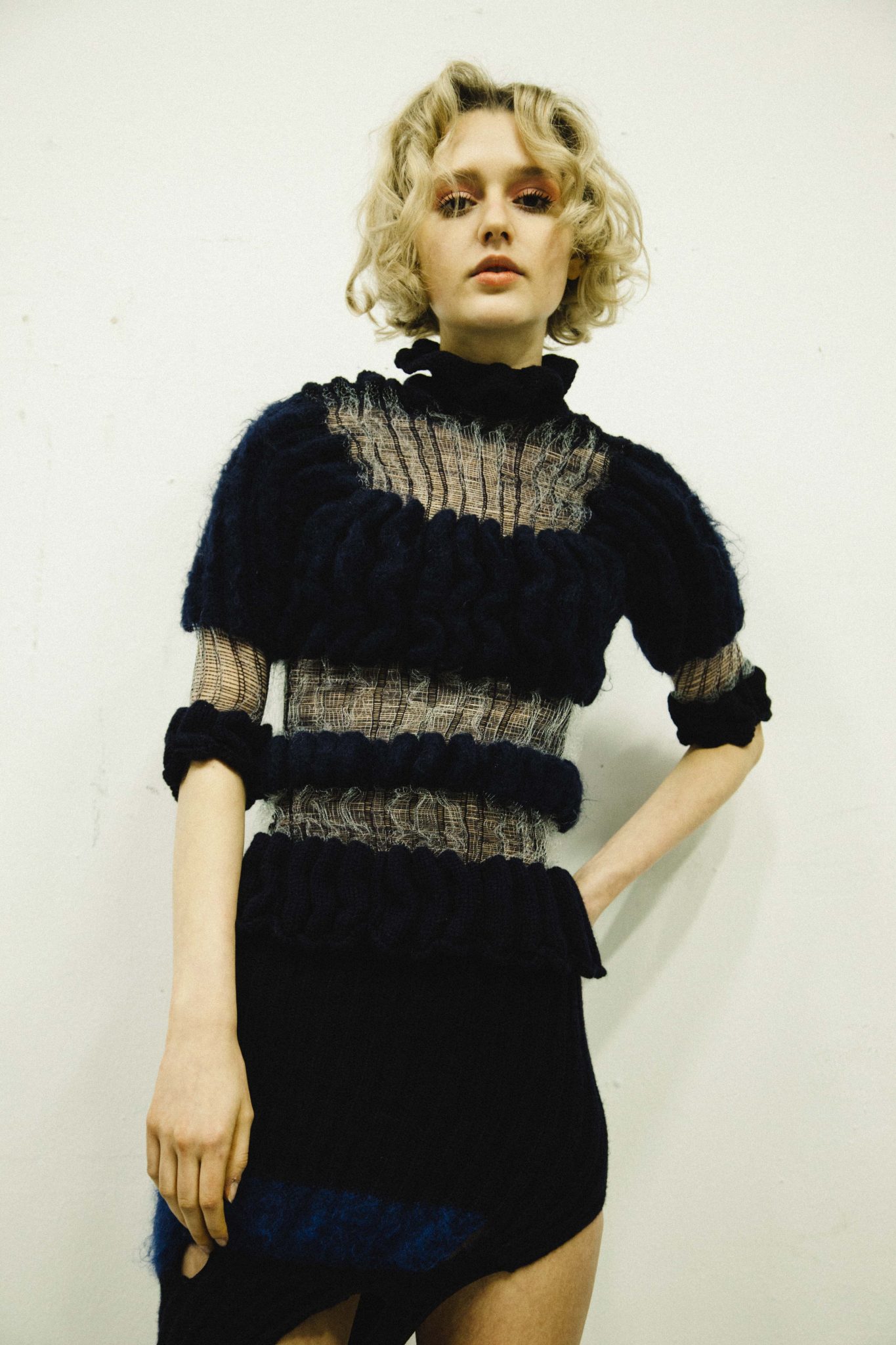 After she graduated, Lawrence started her own line and now  works full time with two part time staff and some assistance from students on placements from their own University courses.  She makes the collections in house and sends the more commercial pieces to factories in the UK to be made up. When she first started, she showed her clothes with Fashion East, Lawrence has now shown her collections for London Fashion Week  in standalone presentations at Chelsea twice since 2015.

“The first time I showed at Chelsea I was looking for a space that worked with the collection – Chelsea felt like home, as I’m still in touch with a lot of people at college, the staff and some students.  It felt nice to go back to somewhere that felt familiar – as it was my first solo show it was daunting to be going it alone, so in a way it felt right to go somewhere I know so well.”

“The Banqueting Suite setting worked brilliant with the clothes, and the location was great too – situated right next to Tate Britain where Topshop were showing in 2015, so it made sense.  It was a good vibe and we had great footfall with people going between the two shows.  In fact, it worked so well I decided to come back the following year!”

For 2016, Lawrence presented in a different space in the college, the Triangle Space.  A modern gallery setting with clean lines and white walls, it was a real change from the venue used in the previous year. “I was working with a set designer called Louis Gibson, an alumnus of Camberwell College of Arts, and we wanted to build something epic and in order to do that we needed a big, specific space.  We wanted the presentation to be interactive, to invite people to walk through the set. We had screens built into these huge structures on which we showed films we had made, but we wanted people to be able to touch the clothes and see everything up close too.”

After the success of this second presentation at Chelsea, Lawrence went straight to Paris where she is part of the LONDONshowROOMS run by the British Fashion Council. Here she meets buyers from all over the world to confirm the Autumn/Winter sales, and now she’s back there’s still no immediate chance of a break. “Next up I’m planning everything for the new season of production.  I’m also working on a few small projects  – some that I’m doing for myself and a couple for other people – they’re currently secret. And then I’m going to be researching for Spring/Summer 2017!”

“If you feel passionate about something then you should really go for it.”

Find out more about Helen Lawrence’s collections on her website.

Find out more about BA Textile Design at Chelsea on the course page.

If you are looking for a unique venue in central London to host your own event and would like to find out more about venue hire at Chelsea College of Arts, please visit our venue hire pages or contact  ccwvenues@arts.ac.uk