Conor Murgatroyd wins £1,500 Knights of the Round Table award at Summer Shows 2016

As the Summer Shows kicked off at Chelsea last Friday, graduating BA Fine Art student Conor Murgatroyd was celebrating both the opening of his degree show and being the recipient of a £1,500 award from charitable organisation The Honorable Society of the Knights of the Round Table.

Formed in London in 1720 by a group of actors, artists and literary friends (one notable early member was Charles Dickens!) to keep the values of King Arthur alive, today the society offers exciting opportunities to young people and awards grants to those who have made an exceptional start to their career. 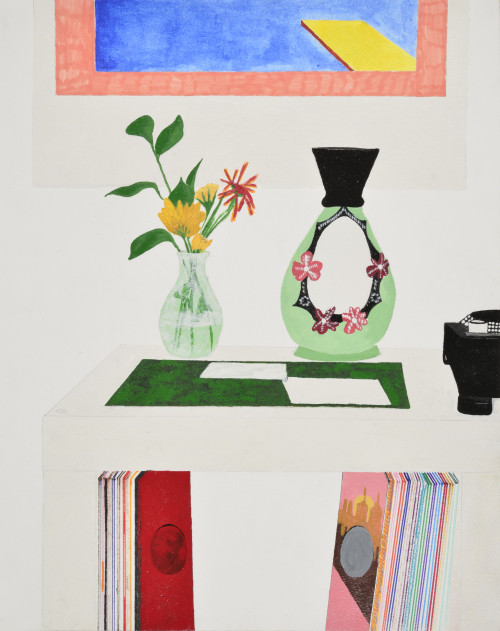 Conor’s large scale paintings in the show feature figures and interiors. One of the pieces includes darts player Eric Bristow, though as he is seen from behind he’s not instantly recognizable. “I was looking at The Night Cafe by Van Gogh” explains Conor, “and I found a connection between this work and photographs I had seen of pubs in the 1970s and 1980s where football hooligans and darts players would go.  In some ways, that painting reflects an identity that seems to have been lost.”

However, Conor is keen to state that his work isn’t political.  “My work is more about individuals, rather than society. I’m obsessed with people who are passionate about what they do – from Eric Bristow to Bryan Ferry – that’s my subject matter.”

He is influenced by Van Gogh and is hoping to spend the summer in France, working on ideas for new paintings, looking at techniques and exploring work by the Expressionists. And he’s delighted as the prize money will be instrumental in making this happen.

When asked what’s next for him after graduation, Conor is adamant: “I’m going to get a studio – I want to paint for the rest of my life.  That’s why I’m here – I want to be a painter.”

Find out more about Chelsea’s Undergraduate Summer Show, open until Saturday 25 June, on our website.