This term the students, staff and alumni from Camberwell, Chelsea and Wimbledon who make up the Digital Maker Collective will be collaborating on a series of exciting events as part of Tate Exchange, an annual programme of public events that takes place at Tate Modern’s new Switch House building, that brings together international artists and over 50 partners who work within and beyond the arts.

As part of these sessions, Wimbledon staff and students on BA Print and Time-Based Media will be producing a live opera in the Tate Exchange space using digital tools to virtually collaborate with Canada’s Nova Scotia College of Art and Design (NSCAD) in real time.

The project resulted from conversations between Lois Rowe, Fine Art Programme Director at Wimbledon, Richard Layzell, Course Leader for BA Print and Time-Bused Media and Bruce Barber a performance an artist, cultural historian and curator who teaches on the Media Arts Programme at NSCAD. Layzell had worked with Barber previously and got back in touch with him via Skype when he learns about the unit he runs entitled Media Landscapes.

“As part of this unit, the NSCAD students were working on an opera because it’s the ideal and complete art form” Layzell explained. “When the German composer Richard Wagner started rethinking opera in the 19th century, he called it the ‘Gesamtkunstwerk’ or ‘total art form’. They used this idea as the basis for their project and this is the phrase which gives the Wimbledon students’ project its title.”

After getting a tour of the opera sets in Canada via Skype, Wimbledon students made their contributions by sending video works over to be exhibited in Nova Scotia as part of the NSCAD course’s final exhibition and two Print and Time-Based Media students event visited the college as part of an Erasmus exchange and were able to take part in person. 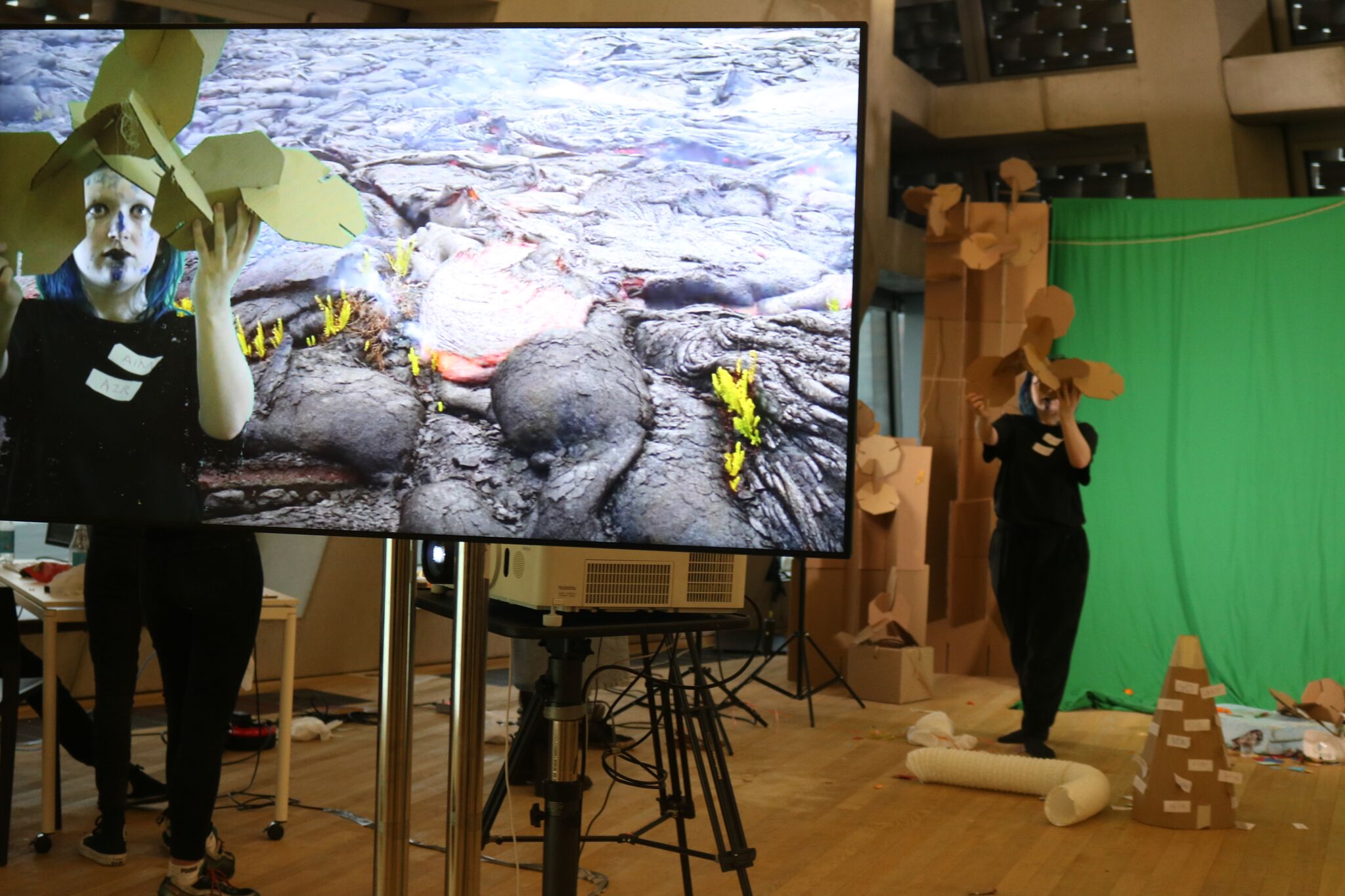 Following the production at NSCAD, students at 25-30 students at Wimbledon prepared to put their own production together, and timed the project to tie in with Tate Exchange. Gesamt combined digital and lo fi techniques to create the sets: cardboard is the main material used to to create sturctres, while green screen create digital backgrounds for the stage.

A graduate from the course, Holly Riddle, has been working with current students on the project. Since graduating in 2015 she has been focusing on producing live events and working with university students helping with their practice in performance work, as well as being a member of the ArtsAdmin Youth Board which creates bi-monthly advice sessions and performance events for 16-25 years olds.

After becoming interested in using digital technology in her own work, Holly joined the Digital Marker Collective: “I love being playful with artwork, and I think that using digital technologies creates a great medium to experiment with, be that creating something new to interact with an audience member or working on finding different ways to make a piece of work tangible.”

“I joined the Collective following an open call from Chris Follows, the creator of the Digital Maker Collective. It’s always been pretty open to new people who may want to just find out how the VR equipment works, or even create a collaboration with the many artists in the collective. There’s more than just digital equipment in this collective, it’s also a space to start discussion and new learning.”

The Digital Maker Collective are an open group who share common goals of exploring digital and emerging technologies in the context of arts, education, society and the creative industries. For Tate Exchange, they will be inviting visitors to take part in digital experiments, performances, interventions, and conversation at interdisciplinary pop-up gatherings, and explore everything digital including virtual and augmented reality, creating artificial creatures and using microcomputers and biofeedback devices to create interactive objects.

She explained that it was the structure and ethos of the group which helped to shape the way in which the Geramt project unfolded: “We wanted to play with the idea of the random and new ways to use technology. We became inspired by the cohesiveness of the Digital Maker Collective – everyone chips in and it forms in to something slightly unexpected.”

During the Tate Exchange sessions, members of the public will also be invited to work with the students on the live opera, with the production divided into five groups that each plays an integral part in making the performance work: Text, Background and Collage, Costume and Make Up, Cardboard, and Performance. “Each group is an amalgamation of different years on the course, all creating for the sake of creating and all equally important in the creation of the work” Riddle continued. “Collaboration and interaction is a key part for the audience to play and view different worlds within the confines of the green screen.”

Find out more about Gesamt and other events at Tate Exchange on the Tate website.

Find out more about the Camberwell, Chelsea and Wimbledon Digital Maker Collective