Will you be mime?

Antonis Sideras has just completed his MFA Fine Art at Wimbledon. From Limassol, Cyprus, which is the island of Aphrodite, Antonis believe’s his home island has had something to do with the playfulness of his work, Limassol is renowned for extravagant carnivals, parades and festivities!

In his own words Antonis tells us about his creative practice and his Wimbledon experience:

“Having completed a BA in Visual Communication at Westminster University with mostly performative work, I wanted to further my knowledge in the field of Fine Art and expand the scope of my work to include mediums such as live art, video and installation. Naturally Wimbledon College of Arts was the place for me. Not only did it have an MFA Fine Art course which was more practice driven, the college itself also encouraged the convergence of performance, fine art and theatre. Perhaps the most appealing aspect of the MFA course was its diverse range of students, who come from a variety of age, cultural and ethnic backgrounds.

In order for anyone to begin unraveling my practice, you need to bare in mind an aerial image of a traffic interchange junction. Think of all the individual roads forming junctions, which are stacked atop each other and all converge at one single point. That is precisely how I see my work; it exists in the interchange of disparate disciplines which are seemingly unrelated when viewed from street level. In that way, some may see my work as theatre, others as buffoonery or not art at all. The truth is, my performances thrive in the instances where theatre clashes with art, clowning rivals drag and comedy taunts critical thinking.

Queerrot (pronouns: they/them), was the character I used exclusively for the degree show. They are a queer mime who marries my passion for queer theory and culture with the long tradition of commedia dell’atre: a genre of improvised street theatre. Queerrot’s perpetual pursuit of company allows me to venture into what I call “partycipation”: a fun way to engage with live art audiences through the use of props, whilst also instigating a conversation about the relation between queerness, solitude and marginalisation. 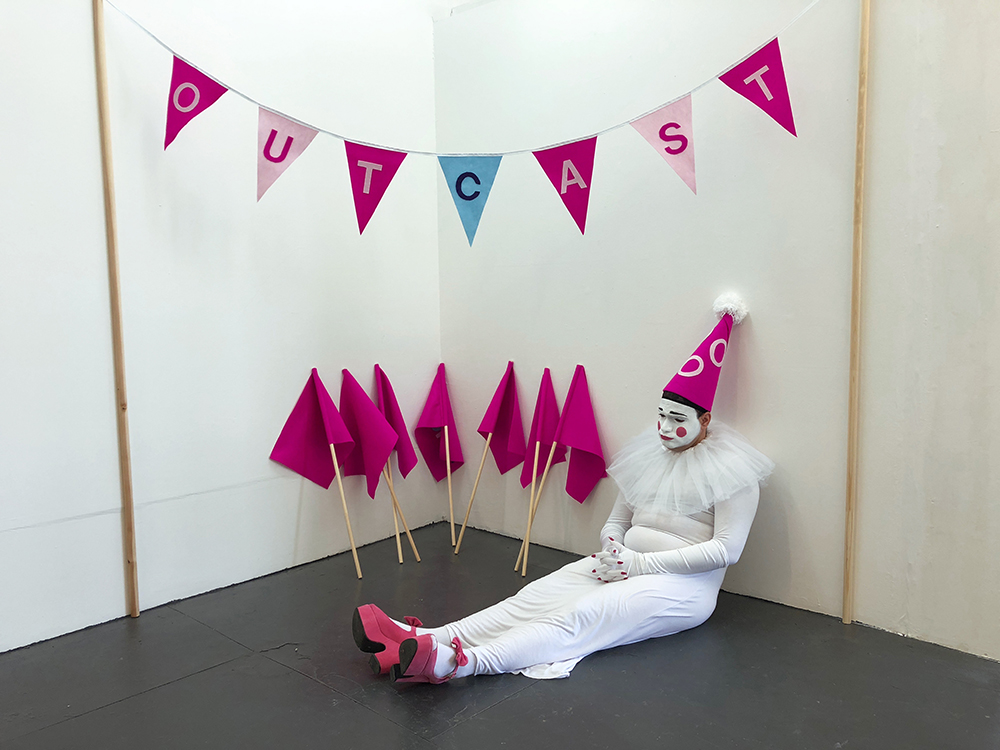 ‘Will You Be Mime?’, Queerrot, image by Joshua Evan

Queerrot was used in my degree show performance titled ‘Will You Be Mime?’. The backdrop for the performance was a set of two installations comprising of DIY bunting and hand held flags made from felt, which I created in my efforts to situate Queerrot in a space surrounded by objects of protest and celebration as seen in many pride parades around the world.

My two degree show installations titled ‘Outcast’ and ‘Party?’ were inspired by the way Felix Gonzalez-Torres would stage interventions in gallery spaces using objects from queer culture – as seen in his 1991 piece “Untitled” (Go-Go Dancing Platform). The colour palette of the bunting and the flags was dominated by fuschia: a colour linked with the queer community as a sign of visibility, with the additions of light blue and light pink which stem from the trans pride flag.

‘Will You Be Mime?’ was staged on the premise of attracting the audience’s attention: a sad looking Queerrot would approach you and invite you to participate spontaneously with them by parading. Queerrot would then provide you with a set of gloves with acrylic nails on their tips, and a hand-held flag; this moment marks the beginning of “partycipation” and designates the participant as an ally to the queer community and in fact to any other person or group who have experienced marginalisation. My use of props as instruments of “partycipation” was inspired by how Joan Jonas uses props as objects which instigate performances. 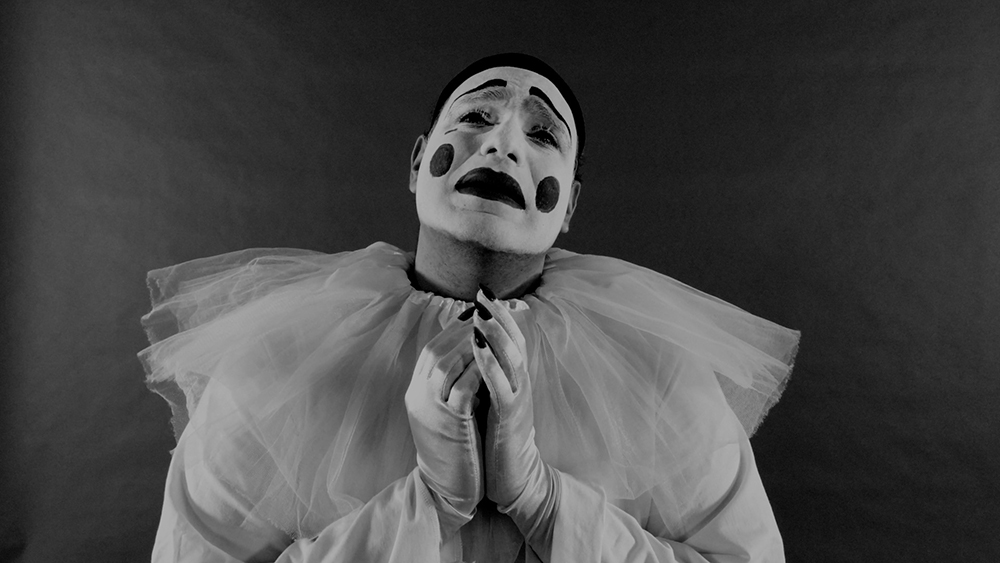 For my degree show performance the costume-making workshop has been an incredible resource which I have used to fabricate and alter parts of Queerrot’s costume, as well as props. The technicians made me feel right at home and supported me throughout my costume-making endeavours, despite me not being a Costume student!

Now that I am finished, I am ecstatic to announce that I have been selected by UAL to receive a full Scholarship for a short course on Participation Art organised by the European Academy of Participation at Marseille, starting in July 2018. This is the third scholarship I have received from UAL – having been awarded with the Vice-Chancellor’s Scholarship for my MFA course (in 2016) and a Young Talent Scholarship for the Performance and Art course at the International Summer Academy of Fine Arts & Media in Venice (in 2017).

The future seems bright for Queerrot and I. Following my return from Marseille I would like to dedicate some time towards resting and reflecting on Queerrot’s recent experiences, so that I can work out how to move forward. I have some thoughts as to where I would like to take Queerrot next and I have also had discussions with other artists for future collaborations involving my favourite queer mime. 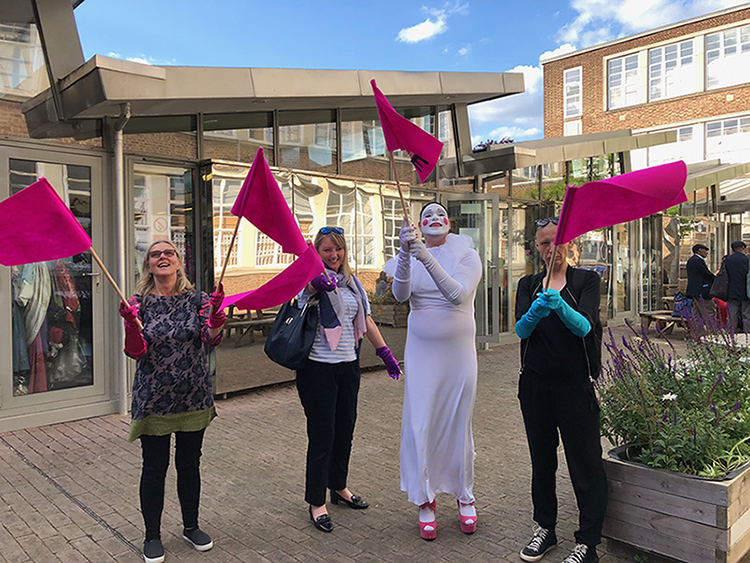 Queerrot with an audience at Wimbledon College of Arts

I would like to take a moment to thank the academic staff of the MFA course. The breadth of art knowledge shared amongst them and their feedback made it possible for me to expand my work in multiple directions and ultimately achieve a distinction! I would also like to thank my MFA 2018 course mates for being an incredibly supportive group!”