This year Wimbledon Space has hosted the fifth iteration of Acts Re-acts, which is an intensive two-day laboratory bringing together a selection of performance, new media art, installation, seminars and other events. Spanning across Wimbledon College of Arts, Acts Re-acts 5 offered the audience an exciting programme including performances that walk the line between fine art and theatre, pieces rendering performance and new technologies, and live art inspired by everyday life.

The first work shown was by artist Aminder Virdee, who set up a performance installation in the Theatre Space which revolved around her experiences with doctors; having a cubic wooden structure encasing objects found in a medical examination room as her backdrop, Virdee delivered a monologue which touched upon the female disabled body and the power structures observed in the health sector. Are doctors always right? Should their practices go unchallenged? These are some of the questions Virdee planted in the heads of her audience by the end of her piece. Not straying too far from the medical world, Angela Hodgson-Teal and Miles Coote also presented their performance The Bareback Museum: “Can I make paintings if I am too ill Mrs. Aids?” in the Theatre space. Taking the form of a life drawing class, the performance found Coote being a nude life model, carrying out choreographed poses to the sound of classical music whilst occasionally reciting poetry. The audience was invited to join in the event, as they were given paper and pastels to sketch Coote’s poses, as Hodgson-Teal conducted the session. Bringing the audience together with this collective activity, established the ideal environment where conversations could take place regarding unprotected sex, PrEP/PEP and lgbtq+ issues. 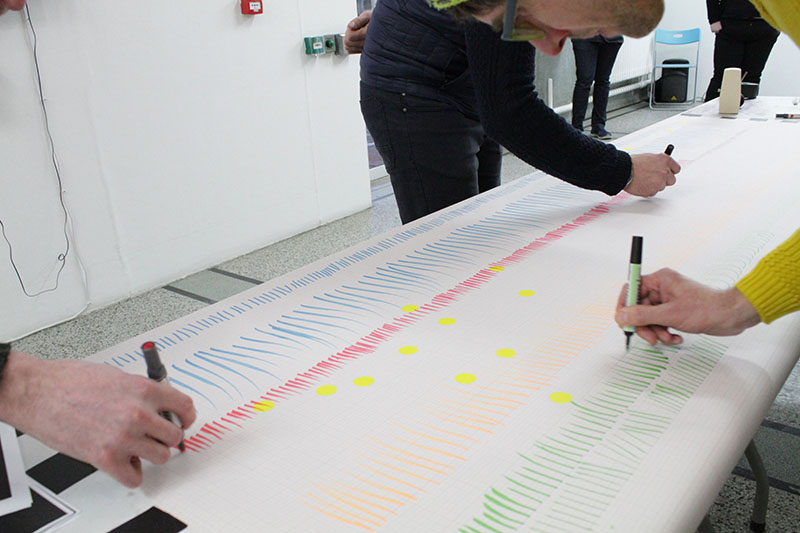 Participation was also key to the performances which were presented in Wimbledon Space as part of Restless Linings: an exhibition bringing together the works of Greig Burgoyne, Joe Graham, Robert Luzar and Lucy O’Donnell. More specifically, Graham and Luzar devised distinct ways to involve the audience in their performances; through his piece Metronome Drawings, Graham asked the audience to draw with him on a long strip of graph paper to the rhythm of a ticking metronome – whereas the audience were shown how to capture their breaths using plastic bags in Luzar’s Demonstrations. The two performances were accompanied by Lucy O’Donnell’s drawing performance, in which she incorporated words from her collaborator’s performances in the process of drawing on sheets of paper on the gallery wall. And last but not least, Burgoyne enlisted the help of the three other artists in walking, measuring and counting their footsteps, while recording the actions on their phones, which were in turn replayed and followed. The simplicity of these acts and their shorter time span – compared to other performances – enabled the audience to follow the reasoning behind the works and subsequently engage with them on a more practical level. 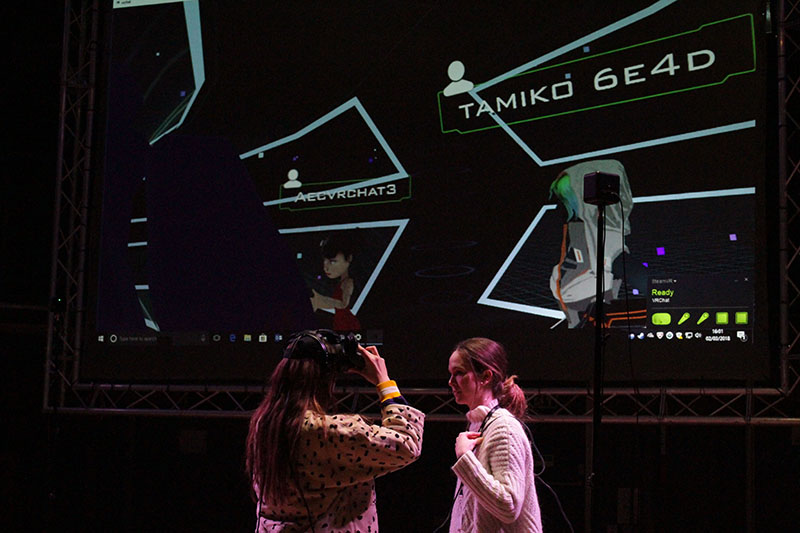 Moving forward into the uncharted territories of virtual reality, The Haptic Collective – comprising of students and staff from University of the Arts London and Linz University – staged a participatory live feed seminar in the Theatre Space. The first part of the seminar was a demonstration of how the virtual reality interface worked, followed up by a tour of the private virtual spaces constructed by The Haptic Collective, which are based from the Tate Exchange space. The second part of the seminar involved a live discussion about the progression of The Haptic Collective project between Dr. Lois Rowe (Wimbledon College of Arts) and Jonathan Kearney (Camberwell College of Arts) from University of the Arts London, and Kristina Mauer and Tamiko Thiel from Linz University. This session illustrated the exciting possibilities of setting up exhibitions within the virtual realm.

These are just some examples of the works featured in Arts Re-Acts 5. Click here for further information on the Acts Re-Acts 5 programme.