Performance artist and final year BA Print & Time-Based Media student Natalie Wearden recently completed a project at Central Saint Martins called ‘Metresquare’, where she repeatedly folded the same origami shape for one hour each day for two weeks in a one metre square glass vitrine in the window of the college.

We spoke to Natalie about the thought behind the ‘Metresquare’ project, including the fetishisation of the artist as a labourer, her performance practice and her advice for students who are interested in studying Print & Time-Based Media.

Can you tell us more about the Metresquare project?

A group of third year students at Central Saint Martins have built a one metre square vitrine which faces onto a window. It kind of squares off a section of the window which looks out onto the right-hand side of Granary Square. It has quite a high footfall of busy, central London workers walking past so it’s quite different from Wimbledon College of Arts in that respect. They built this space and they wanted to have a two week rolling programme of artists in residence; students from across the university which I thought was a really cool idea. 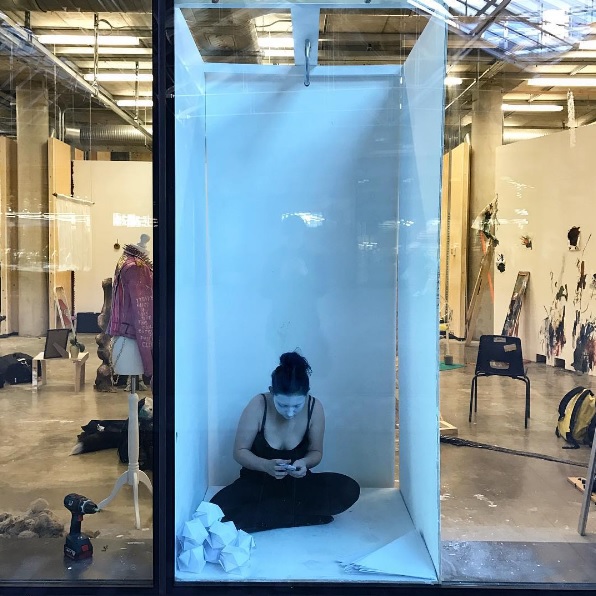 The project I did there is a performance I’ve done quite a few times. This was the third time I’ve done it but this was the first time I had done it over such a long period of time. I spent an hour a day at a different time every day in this space folding the same origami shape out of paper. It was really nice to have this one metre square box where the window acted as a glass screen. All different kinds of people were seeing what I was doing and they aren’t necessarily an art audience – there are art students going past, but it seemed to be mostly workmen like builders and city workers.

The box was lit inside and was quite a dramatic space – I think passers-by did notice particularly when they saw me moving around in there. A lot of people looked at it and kind of rolled their eyes and I got the impression that they thought they were too busy for this art nonsense, but other people stopped – particularly children, they loved to stop and look in. The workmen though it was really funny and tried to turn it into a joke. People sometimes tried to interact with me, particularly if it was a group and I found it quite funny to be playful or silly or something sometimes. There was potential for me to just be really annoyed and think to myself ‘I’m a serious performance artist doing a serious performance art piece and you taking the mick is annoying.’ But it’s not, because at least I’ve grabbed their attention. It is slightly absurd to sit in a box for an hour every day for two weeks and just fold the same thing over and over again, so I can see why people found it amusing. It was particularly funny when I saw the workmen taking the mick out of me because that is what they do, the folding of the paper is a repetitive, physical task just like building or bricklaying.

Physical labour is something we’re so detached from now, because most of our labour is done for us by computers and there’s not this physical tangibility anymore. A bricklayer makes work that is tangible. They pick the brick up, they lay cement and they put the brick down and the brick is heavy and the more physical exertion they put into something the more they produce. The product of their labour is tangible, which is the same as this project for me. The experience of me interacting with the paper and the fact that as I make more there are more and I can see that, there’s very concrete evidence of my repetitive labour. 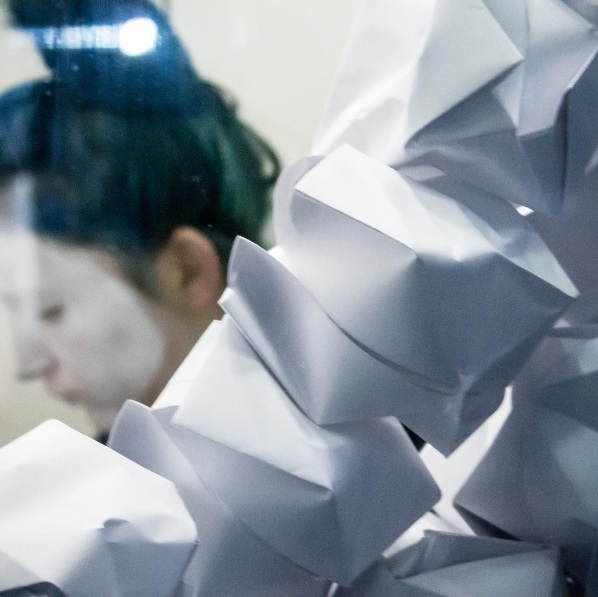 What shape did you make with your origami and is it significant in any way?

I made little boxes that I inflated by blowing into them. I guess the fact that they’re this round shape is very satisfying and it feels like breathing into them is almost giving life into the shape. Particularly in that space, they felt really nice because they felt like a fraction of the size of the metre square box and there was a mathematical feeling to it. They were quite geometric. It was definitely important that they were three dimensional so that they filled the space more.

I do some quite repetitive drawing work in my practice as well, but I find that has a different quality to it than this which felt so physical. During my last hour of this project I was really struggling to get into the space, I had to push all these boxes away from me to get in. They started collapsing on top of me and it felt like I made this thing that’s bigger than me and it’s overpowering and I think people were quite amused by that as well.

Can you describe your artistic practice for us?

I would describe my practice as performance art. I would also describe myself as somebody who feels that they need to be watched, maybe almost an egomaniac. In my performance practice I have this desperation to be watched and for people to find what I’m doing interesting. I love the idea of this fetishised artist, which is probably why I make such labour-intensive work. The artist is somebody who labours and slaves away, or at least that’s this societal ideal of what artists do. I think living up to that, performing it and forcing people to watch me is something that I get humour and enjoyment from.

I use the motif of Pierrot in my work a lot, which I think conveys this longing to be loved. When I’m looking out the window and trying to get people to look at me and they don’t, I feel disappointed. As a result, I feel as though I have to do even more to try and engage people and pull them in. I think it’s really interesting because in previous incarnations of this work I have done it in a space where people are invited in and it’s an art audience and they come and watch me and are very giving to me. But in this case the role is reversed: I have to grab the attention of people which is really different from already having someone’s attention. I would definitely describe myself as a performance artist. Sometimes I make drawings, but I feel like those are still always a product of performance or performative intent. 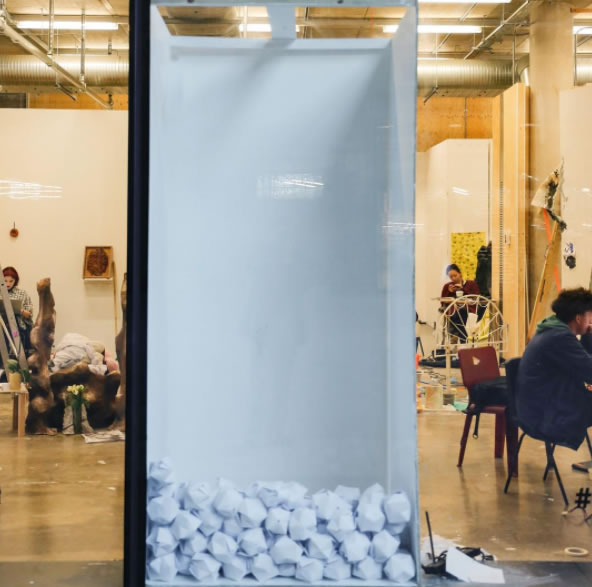 Is performance art what you set out to do when you came to study at Wimbledon?

I’ve always made performance art, whether or not I called it that. I didn’t necessarily define myself as a performance artist before I came here but I didn’t have another intention in mind. For as long as I can remember, when I was a small child, I would dress up. I always wore fancy dress and it became a point where the fancy dress was just my regular clothes! I’d construct these sets in my bedroom and I was always putting on shows, desperately trying to get people to watch me and get people to see me as this otherworldly character. I wanted to play with people and force them to watch these strange things I wanted to do.

I used to have this fashion blog where I’d recreate really absurd images from Vogue magazine in my bedroom. I’ve always been making performance art, but at the time it was just what I did – making things to try and get people’s attention.

What have you enjoyed most about the course?

The BA Print & Time-Based Media is amazing. I’ve been working on an assessment for a project where I collaborate with different people for one hour a week, doing something improvised. Quite a lot of people I’ve worked on with that have been other students from Print & Time-Based Media. There’s just this amazing scope for very natural collaboration, it’s never forced. It’s very much a space where people have different skills but these skills really complement each other beautifully.

The tutors are really playful, fun and open to really different and experimental work and they appreciate total honesty. With them, you feel like nothing needs to be censored. You feel completely able to be yourself and there’s no level at which something becomes “cool”, either. I definitely feel like on this course whatever you want to do, it doesn’t need to look cool or be flashy. You can make very small work or very big work, it doesn’t matter. 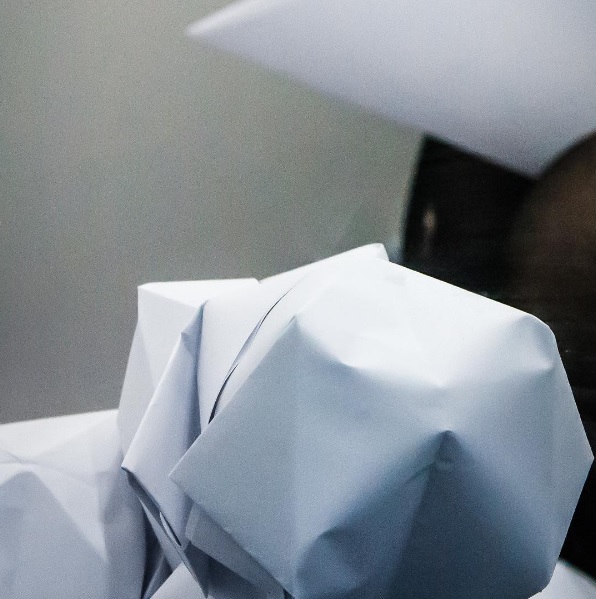 Are you thinking of doing a performance piece for the third year Summer Show?

I think that the degree show is a slightly hilarious convention where you’ve got to make this work that’s the best thing you’ve ever done and launch yourself into the art world. There’s a sacred quality to the degree show. You are aware of being edgy and trying to think about yourself in the context of the art world, and then this mark scheme that needs satisfying, and also – your parents are probably going to come! It’s totally absurd. Also, people that you know who don’t follow contemporary art will be there. The concept of the show, to me, is this weird thing, so I think I want to do something that’s playing on that a little bit. Maybe I will do something hyper-flashy or go the opposite way and do something really minimal, although I don’t know if my ego will allow me to do that.

Do you have any advice for students that are interested in the course?

I think if you’re interested in Print & Time-Based Media you just need to be really open to the possibility that weird things are going to happen. Try and be aware of the people around you, because I know when I first started I had a mentality of ‘this is who I am and what I’m about, I’m a performance artist and I have my practice’. I think as soon as you let that go a bit, then really magical, weird things happen when you let other people in. And that’s definitely the key message of our course: let people in and collaborate. Also don’t be afraid to let go of something that you’ve been clinging onto for a long time. Take risks! Richard Layzell, the course leader always says “ask for forgiveness, not permission”, so if you want to do something just do it.

You can find out more about Natalie and her work by visiting her website and following her on Instagram.