MFA Fine Art first year student Rosie McGinn has had her work ‘WSM’ chosen to feature in the Gazelli Art House’s Window Project from 25 April – 20 May.

We spoke to Rosie about the inspiration behind her ‘WSM’ piece, her multidisciplinary artistic practice and what she enjoys most about studying the MFA at Wimbledon.

What made you want to apply to be the featured artist in the Gazelli Art House Window?

Karen David, who is an artist and was previously artist in residence in Wimbledon’s BA Painting, did a talk that I went to, and in it she was talking about opportunities to apply for post-university and the Window Project was one of them. Because I already had this ‘WSM’ piece in mind, as soon as I heard about the opportunity and the fact that it was in the window, I thought that it would really work. There are lots of opportunities to apply for, but I mainly apply for things that are going to work with what I’m already doing and I thought the window would lend itself really well to the piece.

Can you talk about the piece that you’re showing in the window?

It’s called ‘WSM’ which stands for World’s Strongest Man. It’s a video piece that is a loop of weightlifters continuously lifting the same weight, but it’s just a close-up of their faces. You can see all of their bulging veins, looking like their heads are about to explode. It looks like they’re at the absolute limit of what their bodies can take. My work looks a lot at extreme moments of elation, and this sort of fits with that theme but it’s also looking at obsession with masculinity and body image. It’s just so interesting looking at their faces. You can get so much just by looking at their expressions. It’s ambiguous; they might be lifting weights or they might be doing something else, but you’re just looking at this continuously strained expression.

I had the piece already before I applied and I think that helped with the application because they saw I had something fully formed. Initially, I had the idea that I wanted eight videos all playing at once, but Gazelli came back to me and suggested two videos on the bottom floor and then three big prints on the top floor. They had the idea of the vinyl prints and I’ve never really worked with vinyl prints before so that was cool, and it’s kind of pushed my work into another direction. 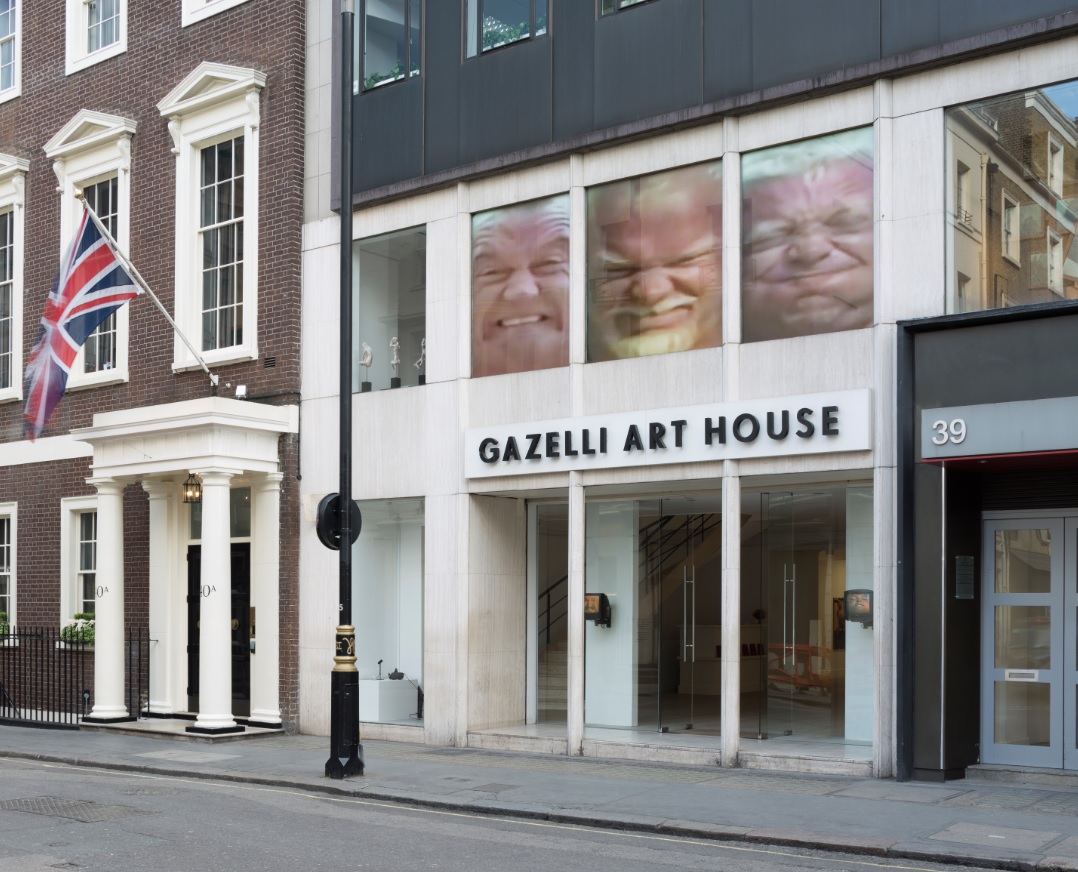 The window has three massive vinyl prints of these close-ups of the weightlifters’ faces and seeing that at the end of the street is obviously humorous and intriguing. When we were putting the vinyl up, I looked over the road and there was a big group of workmen having a cigarette and they were in hysterics, and I thought that was really nice. I like that art doesn’t have to be elitist, it can be every-day and a lot of people can relate to it.

How would you describe your practice?

I use video installation and sculpture to try and capture the human form. I’ve done pieces where I’ve compiled a load of movie or YouTube clips, all looking at moments of elation. My work is very media-based and it’s often stuff that people see all the time but it puts it in a new context and warps it. For one of my pieces I used an armchair with a television for a head, and I conducted interviews with elderly people and had them talk about their lives. I then synchronised the two different interviews so that the armchairs appear to be talking to each other. It’s like a weird but very humorous care home set up.

How has your practice changed and developed throughout the first year of the MFA?

Before the MFA, I was doing a lot more sculpture and installation, but the video works were much more separate whereas now they’re kind of entwining a bit more. And even making something like these vinyl prints for the window has opened me up to more things. My practice is quite flexible and it really depends on the space. I’m really enjoying where it’s headed.

What have you enjoyed most about the MFA Fine Art thus far?

Just having the time and space to make work. The freedom and loads of opportunities, being around other artists and having the opportunity to collaborate and having conversations all the time. It’s led to me applying for and getting featured in the Gazelli Art House Window project  and Edwina [MFA Course Leader Dr Edwina fitzPatrick] is really cool at just letting you get on with your own thing, but also trying to challenge whatever your comfort zone is. I’m really enjoying it. 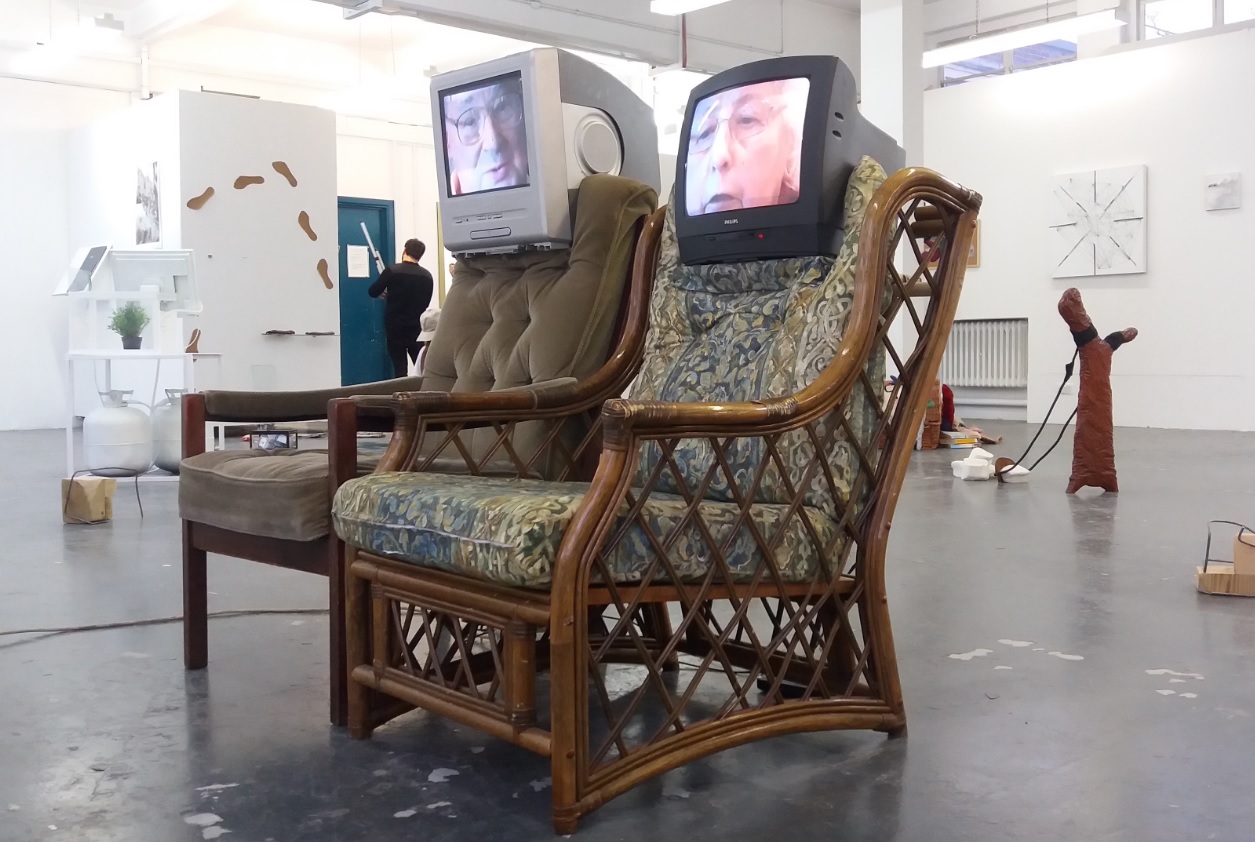 What made you want to do an MFA?

I took a year out after my undergraduate degree and I knew I wanted to do a masters. Taking a year out was really good at letting me reassess my work and also making me realise how difficult it can be to carry on making work when you’re not in the university environment.

I just wanted to carry on the momentum and keep making work, and also be around other people in a studio space. I wanted to try out London as well, because I did my undergraduate degree at Falmouth. But I like Wimbledon because it’s a bit more chilled and less chaotic than central London. I immediately liked the vibe here; it’s a bit more relaxed and isn’t pretentious in any way.

You can see Rosie’s work ‘WSM’ by visiting Gazelli Art House, and can find out more about her on her website.