Wimbledon’s final year students Summer Show opens tonight, 14 June 2018. Print and Time-Based Media student Luc Wilkinson will be performing his final year piece live for the duration of the evening. Here he tells us about his work and what to expect from his show:

I had a pretty normal school education I suppose, I always fancied art so I did that for GCSE, A level and then I did a foundation course following that at Manchester School of Art. I applied to Camberwell and Wimbledon for their Painting courses but towards the end of my foundation a lot of my work was photography and film. By the time I came for my interview at Wimbledon the interviewer looked at my work and said there isn’t a whole lot of painting in your portfolio, they asked if  I could be recommended for Print and Time-Based Media (PTBM) course instead. I said, well I don’t really know what it is, but sure go ahead. I didn’t give it too much thought until it came down to choosing where to go so I thought well Wimbledon offered me this pretty interesting course – it does film, it does performance, which I was less interested in at the time. Mainly what interested me was focusing on sound which is now what I do a lot, but at the time it was more of a hobby than part of my practice. Wimbledon seemed really friendly and chilled and had this really interesting specialised course and a bit of a life style change is always nice, moving to London.

Currently I am creating soundscapes instrumentally, I use guitar, a little keyboard, a synthesizer, drums and sometimes vocal, little low hums. I have 15 effect peddles that process the sound and make it sound like something from the other end. I do dark ambient soundscapes, vaguely inspired by horror soundtracks. 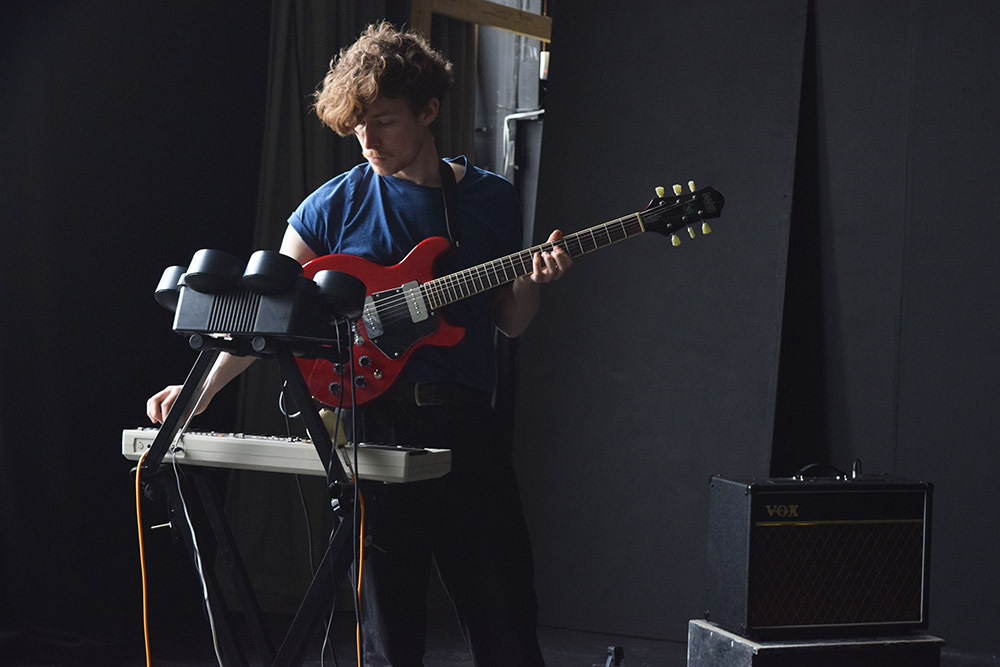 Please tell us about your final piece(s) for the summer show:

For my degree show my work has taken on the form of performance, which I haven’t done before as much. In the past I have been writing things, recording a specific track of a certain length and presenting that, but now I am going to be performing semi-improvised half hour performances. There are a couple of little melodies or tricks I will have up my sleeve, but generally I will leave it up to whatever happens in the room. When I applied to Wimbledon I wasn’t into performance, in the same way that I didn’t realise sound was an art form. I stunted myself in terms of not performing, I thought, there is no way I’m a performer! Mainly because I thought the things I was writing were not performable, which is true is some ways, I didn’t have performance in mind as an end product, so I wouldn’t really pay attention or make note of what I was actually doing. Now, there are certain tracks from the last couple of years that I would love to be able to perform. When I listen to them I don’t know what I did, I have no clue so now I just write things with ‘this will be a performance’ in mind. Following my interim show the feedback was that it needed to be seen and done live.

For my final piece I am going to be in the film and video room which is a space for PTBM really. Usually it is used for the course for show reel as there are usually a lot more films. This year they have been dispersed throughout the campus on different screens. So, the room was free and its perfect because the installations I have done in the past have always been in dark spaces with light and projection – I wanted the visuals to be dark and moody. It’s going to be myself with the instruments in a circular formation with some light provided by the Theatre department. Originally I wanted LEDs, I wanted different formations of the lighting. The lights are going to be controlled by me, using a mixer, it will be performative as well as the sound, but managed manually, so it’s not triggered by the sound. I am doing half an hour slots for two hours throughout the show which means 40 performances all together. There is only so much set up I can prepare, I’ve been doing a lot of fiddling around and making noises. I guess I’m just creating a tool bag of ideas I can throw in there during each performance or just practicing confidence. 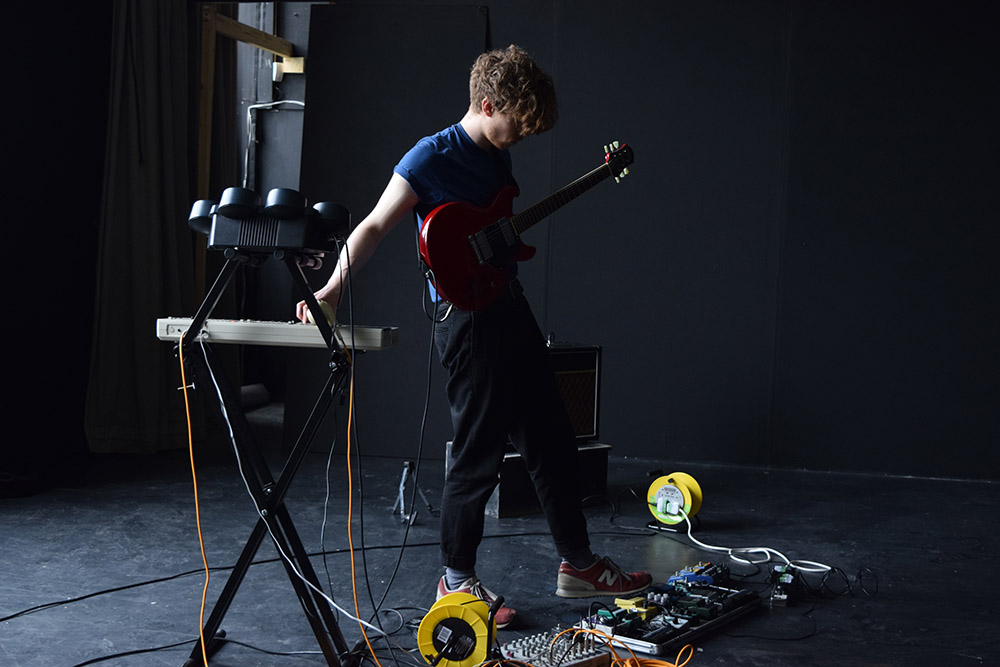 I think all the PTBM staff are brilliant. Paul Tarrago does a lot of the essays as well as giving us seminars on film theory. Jack Perry and Ursula Pelczar from AV are a god send, any problem they know how to fix it as well as being really helpful with learning programs. Mariana Fantich and Grzesiek Sedek in the DMC. Grzesiek is great he just knows anything electronic. One time I turned up with an old wind up telephone, because I had seen them before where they had been turned into microphones. With his help I managed to do that, take it apart and know what to put where. He has helped other people on the course for example if someone wanted to convert their brain waves into work and he was like, “I have a brain scanner at home if you want me to bring it in”. So the student used it to translate their brain waves into visuals or lights.

What are your plans after you leave Wimbledon?

I would really like to eventually work on sound tracking for games and for film, as I am mainly inspired my film and game soundtracks. Initially I am happy to take any job in the arts but that would be my aim. I also want to make my own stuff, releasing it online, if I can perform at places then sure.  Someone I know who does games at university has used my music on their soundtrack, but I can’t release it until they are finished. Hopefully those avenues will expand.

Dominic Hudson on PTBM has some really crazy stuff going on with anthropomorphised mattresses that breathe and watch telly, which I am excited to see.

In Painting I am looking forward to seeing my friends Joanna and Senade, they have sculptural stuff.

I am always excited to see the Technical Arts and Special Effects course and the work they produce. Chloe Wells on that course has made this beautiful traditional sculpture and I want to see that up close.

For me first year was really important pushing a way what I thought I was meant to do and ending up in a place so different. One of my first projects where I did sound with photography as well, that set in stone the aesthetic and presenting the sound stuff as the main work. You learn so much from each unit and they all contribute to where you are now. I think it was in Unit 6, I created a piece of work called ‘Gyres’ which was an animation and sound piece which was really well received and aligned a lot of thinking. That one was more of a turning point. Nick Reinhart, he’s in a band called Tera Melos. I would say it’s less to do with his band stuff and more to do with his personal work. He’s this insane guy that uses effect pedals like no one else. The effect pedals alter the sound, you can make things sound like rock and roll or add ambiance or you have delayed pedals. Nick Reinhart does all those crazy things, but he also does looping, looping samples that he is playing live, he moves them around as if he’s throwing rubber balls around a room, that’s what it sounds like. He did three albums that he released once a year on Halloween called ‘Scary sounds’, just because they are dark and kind of jokey, all instrumental.

I get more inspired my films. My all-time film that inspired me was ‘2001: A Space Odyssey’.

Do you have a favourite place in Wimbledon College of Arts, the Wimbledon local area, or in London that you have enjoyed going to throughout your three years? Please state where and why:

Do you have any advice for students?

The course can seem really chill, sometimes to the point where I was unsure what I was doing, but that’s because they give you a lot of space to really explore. Don’t be afraid of exploring things – if you have an idea, just go for it. Utilise all the workshops, getting to know different processes whether it be digital or physical, just because all those skills really do become handy. When it comes to your degree show you find you need to know things that you never used before, but once you did so you vaguely remember how to run a programme. Ask advice a lot, don’t be afraid of tutorials.