Established in 1976 by Sir Brinsley Ford and supported by the Royal Academy the prestigious Richard Ford Award is an incredible opportunity. The award allows selected figurative artists the chance to travel to Spain to study paintings in the Prado Museum, Madrid.

When Sir Brinsley inaugurated the Award in 1976 he wrote, “Primarily I have founded this award because I am convinced that it must be of great help to any serious young painter to be able to study the paintings in the Prado, particularly those of the great Spanish masters, headed by Velasquez, and of the great masters from other schools such as Titian and Rubens. No such award exists and the opportunity of studying the works in the Prado has been denied to many young artists who might have gained much by the experience.” 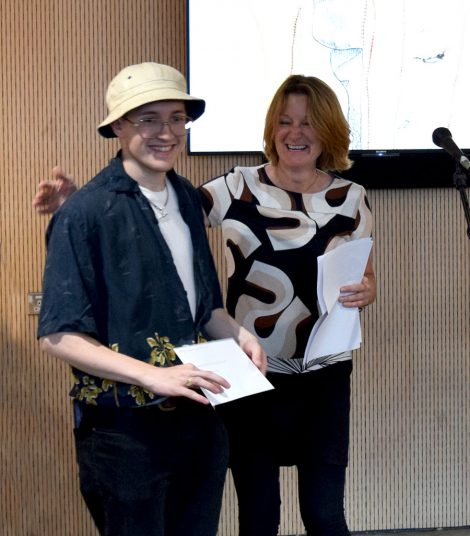 BA Drawing Graduate Patrick Metcalfe is one of a few selected for the 2018 Richard Ford Award. Marianne Ford, the great, great grand-daughter of Richard Ford chooses who is shortlisted. Patrick’s final project was specially selected and titled, ‘Investigating the privilege I’ve inherited as a white British male, afforded to me through a history of empire’. 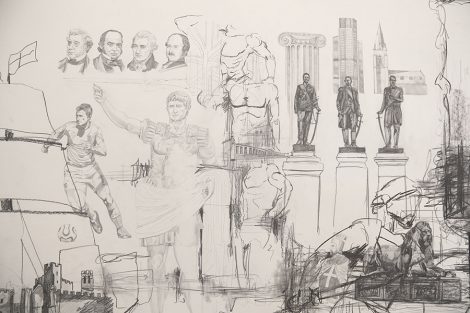 We spoke to Patrick to find out more about how his practice has developed, the particular pieces that led to his selection, how he’s continuing with his work and his experience on the BA Drawing course at Camberwell:

“Over the last year my practice has revolved around an investigation, or perhaps self interrogation, regarding the position of my race, nationality and gender in the context of a history of intense privilege. Re-evaluating this inheritance and the figures that secured it has meant confronting my own perceptions of former heroes such as Lord Nelson, Sir Francis Drake and Duke of Wellington. As well as questioning modern society and asking whether it has progressed, while neoliberal imperialism and neocolonialismstill bolster class, economic and racial hierarchies. The piece that I exhibited at Camberwell’s Degree Show, expressed this theme emotively in scale, physical characteristics, and through my choice of combining and contrasting a variety of images drawn in a disparate array of styles. The 2.4 x 50 metre roll of paper was contorted into a sweeping curving 2.4 x 4.5 metre piece, that towered over the viewer coiling against itself as a manifestation of the complex nature of the subject. Drawn across the piece in varying styles, were depictions of famous Britons, family members and images of empire that culminated in a dense heavily worked section functioning as the focal point of the piece. Also included in the work are printed images of portraits of Lord Nelson and Duke of Wellington worked into and drawn over.

“The preparatory works of this style were the pieces that granted me my position as a Richard Ford award winner. While on show BA Drawing Course Leader Kelly Chorpening advised Marianne Ford, the great, great grand-daughter of Richard Ford to view it. Her interest in the pieces allowed me to be submitted for the award, something normally reserved for post-graduates at the Royal Academy and The Royal Drawing School. The award provides a few students with the opportunity to visit Spain and draw from works the Prado Museum, Madrid. After compiling a series of works, whoever is judged to have created the best selection will be awarded £500.

“The overt recognition of history within my work means that the experience of going to Spain and being able to examine pieces by artists such as Velasquez and Goya in detail will be incredible. The work that I will be studying will provide an insight into the perceptions of people contemporary to some of themes which I have studied in detail within my work so far. I’m sure the chance to analyse the art of these masters will impact my future work and gain a more developed understanding of the considerations that have gone into these masterpieces. It will, I’m sure, be a terrific and positive experience.” 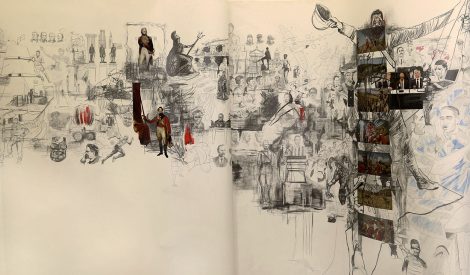 “The work that I’m doing now is a continuation from the theme explored for my final piece, the examination of society in the context of history. Looking at modern empires, modern masculinity
and the roles they play within society, as well as the effect that past perceptions of these entities have had on the way we view them now. I consider my work as a visual language. Film director and theorist Sergei Eisenstein’s theories of ‘intellectual montage’ and ‘third image theory’ have influenced my work greatly, with the idea that through combining or juxtaposing two or more images you can create a mood, a feeling, or a lesson that the viewer can experience. I try to avoid being dialectical and instead hope the work can function as a visual representation of the turmoil of indecision due to an excess of understanding and an empathy form multiple positions on the same theme.” 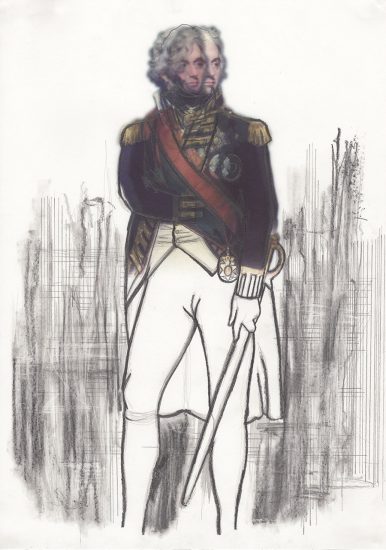 “I came from an illustration background, I specialised in it during my Foundation at City College Brighton and Hove. I chose to go to Camberwell College of Arts and the BA Drawing course over other art courses as I felt that a course that specialised in Drawing while still allowing for deviation, and experimentation would allow me to develop my practice. I have been able to test the limits of drawing and it has allowed me to make more interesting and compelling work. The work that I have made while at Camberwell has progressed tremendously.” 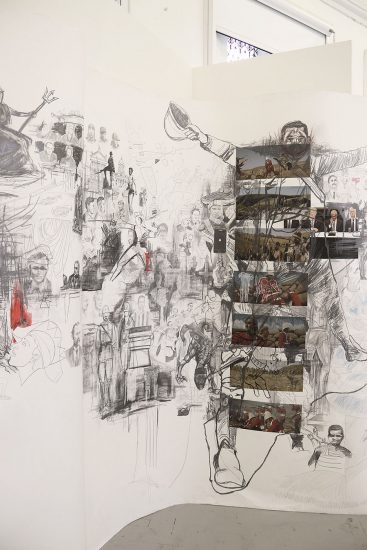