BA Illustration Tutor Geoff Coupland has had a longstanding interest in folklore and along with some other folk fans Geoff has developed The Golden Thread Project, a celebration of all things folk.

To find out more we caught up with Geoff and some of our final year BA Illustration students who gave us a fascinating insight into The Golden Thread Project and the buzz around the up and coming ‘Murri Celebrates The Golden Thread’ event, taking place on Thursday 28 June at Cecil Sharp House.

What is the Golden Thread Project:

The Golden Thread Project started as an idea for an exhibition about folksongs that were born in the UK and then over decades and in some cases, centuries, became part of the American songbook.

On this theme we have produced a book, an exhibition and we have an up and coming musical event on Thursday 28 June. We realised that we want to carry it on and develop it along with our website into a platform that keeps finding new connections between cultures, songs and stories from all over the world. 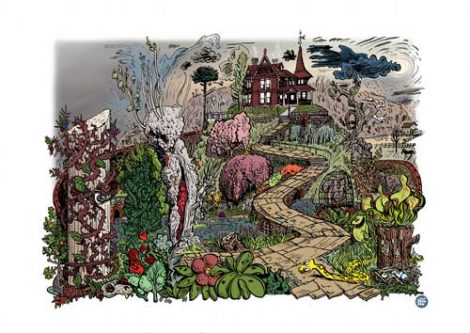 What exactly is so fascinating about Folk song and Folklore?

Folksong is the still-very-much-alive ancestor of many modern forms of music, so really I see it as just part of the ever extending continuity of musical development, that I, as well as many others, are fascinated by and sustains our souls on a daily basis. The songs were devised about every aspect of life, love and passion, and still hold great meaning and resonance for anyone who is willing to listen to them today- so my answer to that question is “What’s not to like?” Folklore is a really interesting subject because we can discover how other people, in earlier times, lived and struggled and solved their problems. There is also a sense of mystery, beliefs and poetic spookiness that we can barely understand, but resonates emotionally with our own modern lives.

As well as illustration and other visual mediums displayed in the exhibition what made you include other creative aspects such as Jewellery Making Workshop and performances?

As well as it being a great excuse to have a party, the Craft/Art workshops that are part of our MURRI event are natural extensions of our love of making and doing and being inspired by craft and the subject matter of folksong and lore. As for the Music, it would be churlish not to reconnect back to the music and dance after drawing such inspirations from the songs. Many of our Illustrators are also musicians and they were dead keen to give back in that way. Our Head line musical artistes Lisa Knapp and Gerry Driver are award winning folk singers/musicians. Its wonderful that we have found a way to contribute back into the folk tradition as well as making comics that celebrate  and communicate about it. 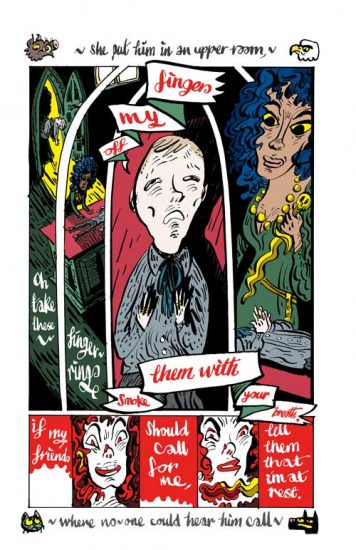 So far we are working with The English Folk Dance and Song Society, 28 amazing Illustrators, including Camberwell’s very own final year BA Illustration students Bette-Belle Blanchard, Tommy Brentnall and Beau Brannick.  We also have successful Illustrators and Cartoonists like Jim Stoten, Lesley Barnes, and Gary Northfield.

What are your future plans for The Golden Thread Project?

We will continue to develop the website, adding content, writing, comics, illustration, animation etc and to seek other ways to connect up nationally and internationally with The Golden Threads that connect cultures. We have some great posts coming up and already have some fun collaborations developing with well known illustrators, some of which also attended Camberwell College of Arts. We are also in negotiation about touring internationally and doing residencies.

‘The tale I chose to focus on was ‘The Cruel Mother’, a story about a lady who has triplets out of wedlock, and then she kills them all because she’s too scared to expose her shame to her family. The babies come back to haunt her, and then the devil gobbles her up’ 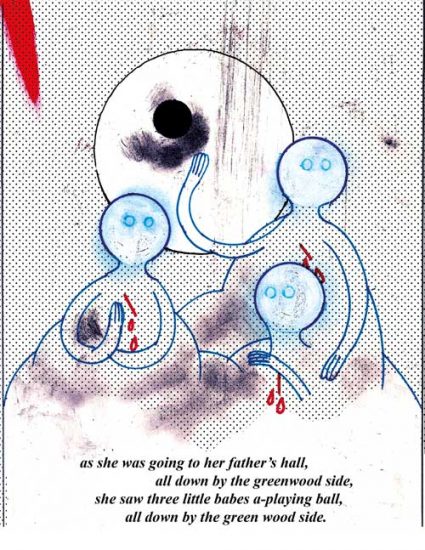 ‘Folksong/folklore is something that doesn’t ever really die, it is very much ingrained in every culture. I see Folklore as a way that people have decided what their identity is – for example Folklore often asks moral questions. Listening to folksong or reading folklore can also give a lot of clues about what life was like at a certain time, particularly for women or poor people. If you have a look at my chosen song to draw, ‘The Cruel Mother’, you can really get an impression of what it was like to be a woman, how society saw you and your womb as a vessel, and how society valued virginity over your life.

‘Folklore is ingrained in our culture in so many different ways. It only makes sense to show this as something that is multifaceted’

I personally have always looked to folklore, fables, and literature for ideas about narrative, characters, etc. this was a perfect project for me really because i love the romanticism of folklore’

‘For me the project was a really good exercise in learning how to interpret and depict narrative. I had always toyed with making comic work but had never really had an outlet to experiment with it fully. The fact that we were taking the ideas from the old songs and re-framing them in an updated/different setting was also really interesting. It was also exiting as a student to take part in a project that was a collaboration between already established illustrators. It’s nice to see your own work alongside that of other practitioners that you admire. 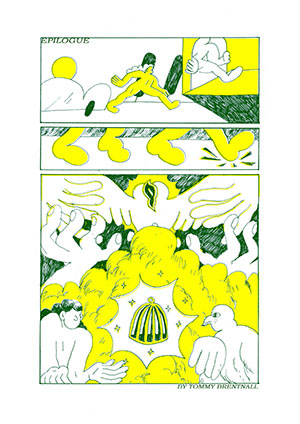 ‘I really enjoyed working with the old stories and subject matter to create something new, and it’s definitely something I want to take further in the future.’

My knowledge of folk music and culture was limited before this project, but taking part in the book, and subsequent events has been a lovely introduction into it. There is so much rich narrative in folk song/lore on account of it being passed down steadily over generations. Each song/tale mutating and spawning different versions as it is retold again and again. It’s been exiting to learn about this whilst also getting to take part add to it at the same time.’