Foundation Diploma in Art and Design alumna Avni Goyal graduated from Camberwell in 2015 and is currently in her final year of BA Set Design for Screen which is now known as BA Production Arts for Screen. The BA Production Arts for Screen course at Wimbledon College of Arts has been developed by bringing together BA Set Design for Screen and BA Technical Arts and Special Effects. The course offers a unique combination of design and making skills for film and television. Avni has been an outreach ambassador and student ambassador at UAL since year one, whilst also representing the students’ voice working with the student’s union on several projects.

Born in Indore, India Avni was torn between art and science, until she came to Scotland to Gordonstoun School at the age of 14 on an exchange. She admits that this experience made her ‘fall in love’ with the way art was taught in the UK. Determined to make a career in art, Avni chose the foundation at Camberwell as her starting point.

What made you select the Foundation Diploma at Camberwell?

I studied physics, chemistry, biology and fine art at high school as I always believed that art and science were more interrelated than people realised. I knew I wanted to make a career in art, but I wasn’t sure where I would fit into the seemingly vast world of art and design. I also knew I wanted to study in London and after  doing my research, Camberwell College looked like the right place for me.

I chose to do a Foundation Diploma in Art and Design because I felt like I needed to stop for a bit and understand what I needed to do next. Transition from school to University was so overwhelming, and going to Foundation, while the rest of my friends started their degree courses, felt like a step back. But I knew not to rush myself, because there was a lot I needed to understand about art and my own practice before jumping into a degree course. I am very glad I made that decision.

How was your experience during the course?

During the diagnostic mode (the first term of the Foundation course), I was fairly certain I wanted to go into painting. I didn’t feel like I fitted into any other pathway, well not until I was introduced to the theatre and screen pathway. I couldn’t remember the last time work felt so effortless, fun and inspiring. I talked to one of the pathway tutors who connected my love for theatre, stories and films to art, and I realised that set design was perfect for me!

My Foundation year was life-changing and I can’t recommend it enough. Even if you know what you want to specialise in, it’s great to take a year to understand what your practice means to you and how you like to work.

I specialised in theatre and screen and the projects helped me discover my own way of working through the concepts given to us. One of the projects I enjoyed the most evolved from a concept called ‘Arrivals’. I decided to depict my development from being a painter to a model-maker, by making a model about the transition. I really enjoyed adding humorous details to my piece, the model and sketchbook on the table of the piece below, show the project I had just finished before this one, the books under the table are the exact ones I had at the time, and there are miniature sticky notes under the table with a list for this project. 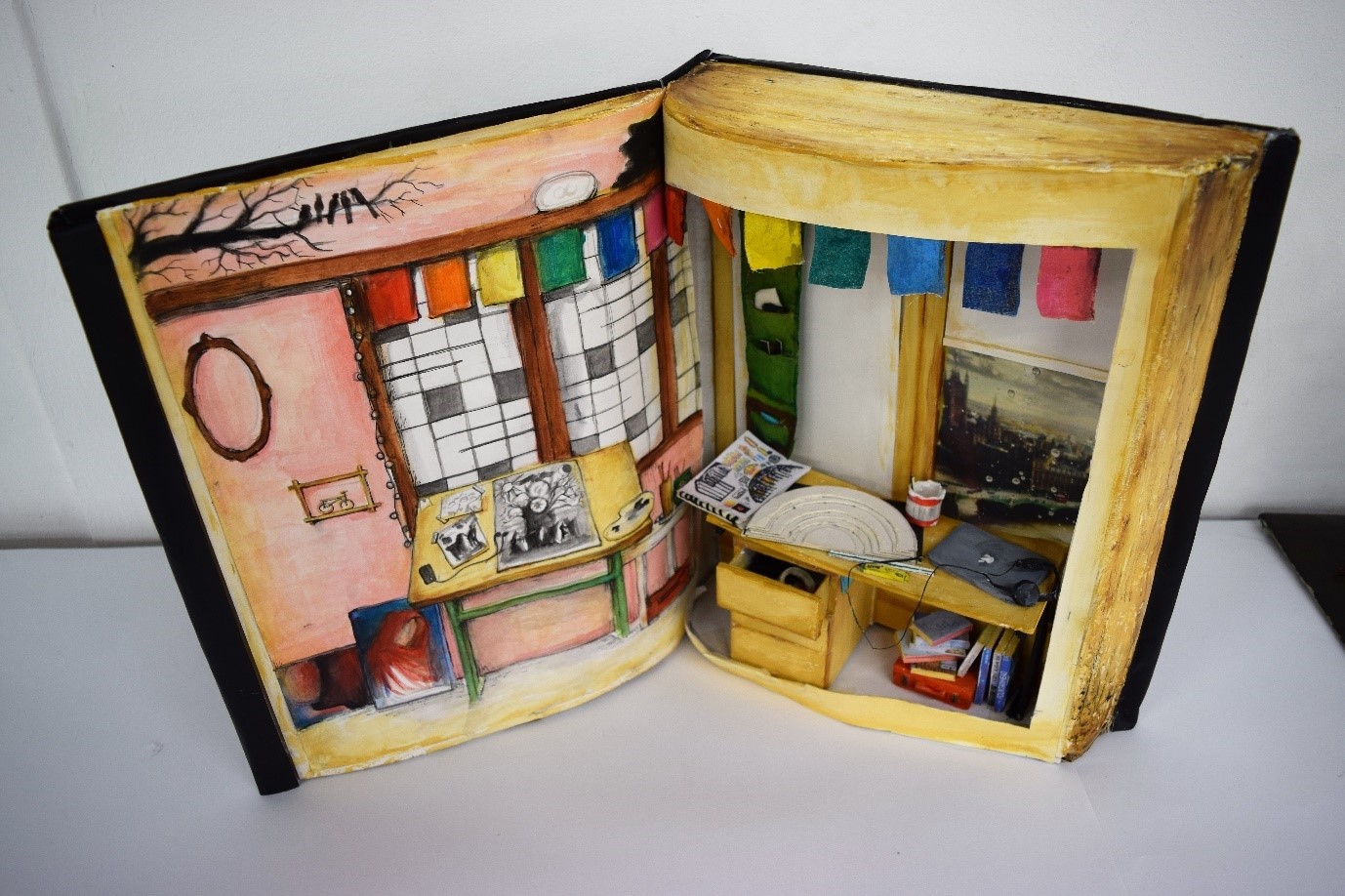 The Foundation tutors were enthusiastic and encouraged us to experiment. We had some great visiting lecturers, one of them was Stanley Kubrick’s assistant, which was a treat because I designed ‘The Overlook Hotel’ from ‘The Shining’ for my final project.

The main focus of the specialisation was process rather than outcome, and even now in my final year, that helps me everyday. One of the biggest lessons I learned during the  Foundation was that there is no right or wrong, and mistakes are better than perfection.

Did you continue at UAL after your Foundation?

Yes, I continued on to BA Set Design for Screen which has since evolved into BA Production Arts for Screen at Wimbledon College of Arts and I am now in my final year. I was torn between screen and theatre, but chose screen in the end because I naturally worked through camera angles. The course explored a variety of skills and ways of storytelling, and had an impressive list of visiting lectures. Also, I wanted to stay in London, because the work opportunities and exposure to contemporary art here is incomparable.

The reason why I chose Wimbledon was because we were the last year at my Foundation to do our specialisation in Russells, a building in Wimbledon. I just fell in love with Wimbledon, both the area and the college, I liked that it was small and residential. We would go to the canteen and I remember this one day a girl came in to the canteen with overalls covered in a paint, and there were students having a make-shift Christmas meal on the table, I just loved the atmosphere.

Also in my second year, my course collaborated with the BA Film Practice course in London College of Communication, I enjoyed making a film with them so much that I took time to help them for their graduating film which was about behind the scenes of ‘The Wizard of Oz’. Currently I work in the art department of film and television, and I aspire to be a production designer. Designing for screen is a bit like interior design, but for more specific characters, time period and place. It is a long process, because you’re essentially creating a world for the story to take place in. I compile my initial design ideas using a mood board or sketches inspired from the script. I begin by doing extensive research into time, place, architecture, furniture, culture and everything to help me make my designs as authentic and immersive as possible. It’s always tricky striking a balance between authenticity, budget and the ideal design, but this tug of war is how the design evolves. There’s a lot of subtle character psychology involved in the choice of colours, the tonality created by lighting and the framing of the shot.

There’s a variety of work that goes into executing a design: technical drawing, visualising designs through digital models and white card models, set build and construction, props buying, set dressing, creating graphics, all of which I only learned in the last three years of my degree! I enjoy making concept art the most and I am trying to get better at it. I also love being a standby on set, checking that the framing of the shot is right and everything on screen looks right.

For my final project I am doing the production design for the book ‘All the Light We Cannot See’ by Anthony Doerr, as if hypothetically it was being made into a film. The majority of the story is set during the Second World War in St. Malo, France. The book is written so well that I could really visualise the world it is set in. I wanted to explore what it is to show a space from a blind character’s perspective, the character Marie Laure’s point of view, who is the protagonist of the story. 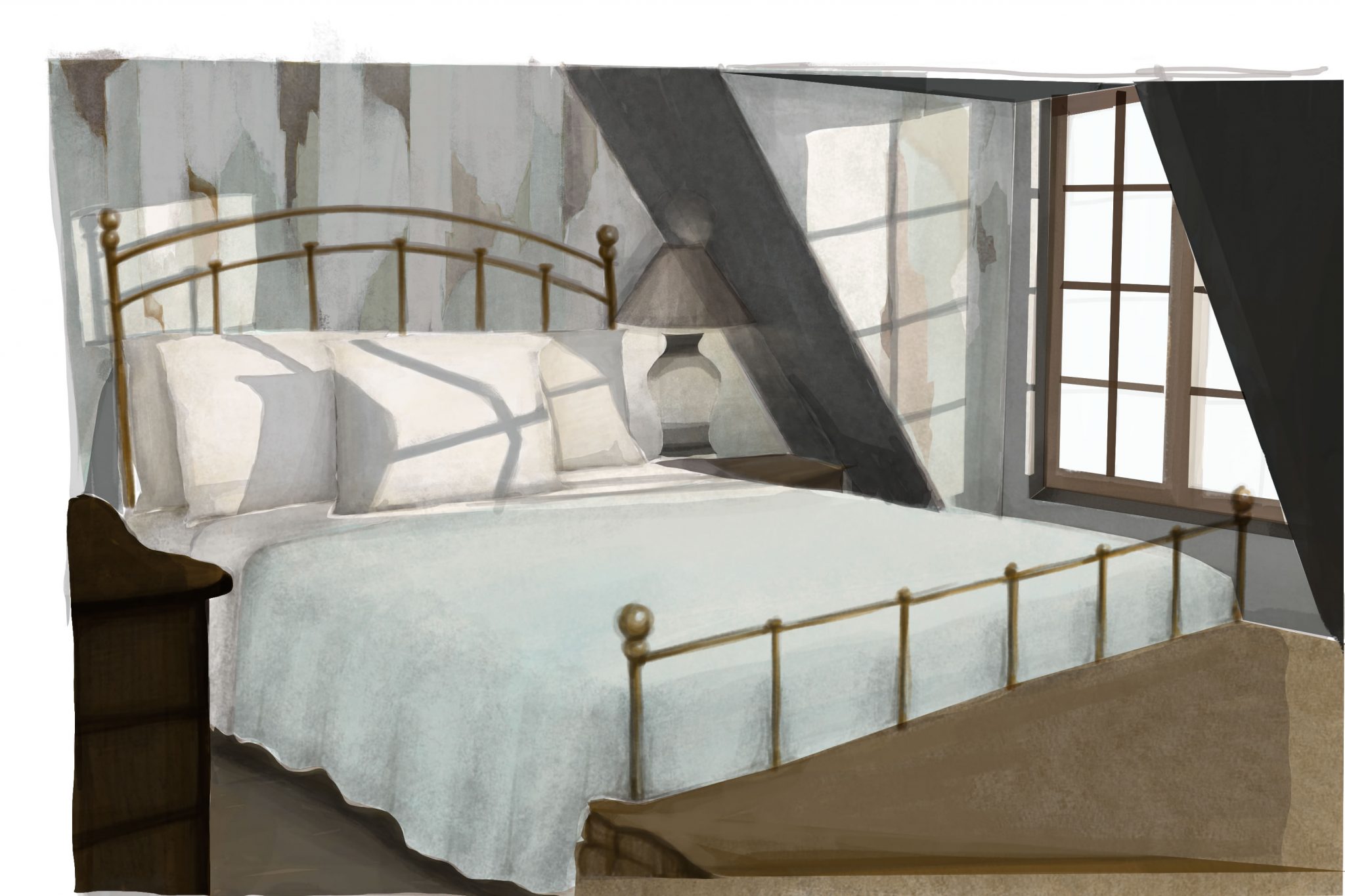 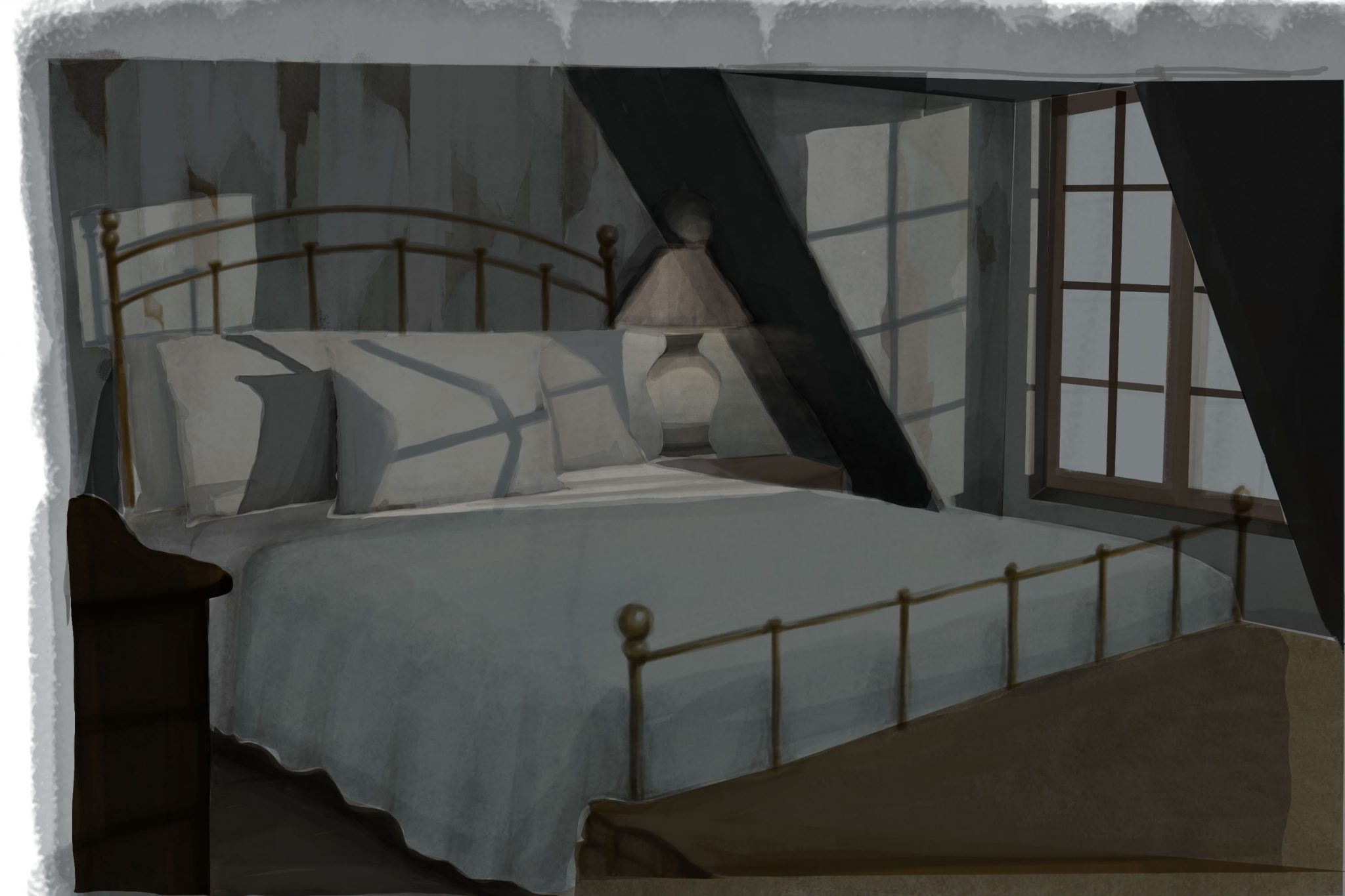 You also work as a student ambassador at UAL?

Yes, I have been a student ambassador since my Foundation year. I remember how daunting it was to apply to all the different colleges and make a choice. I like being able to share my experience with the prospective students and hopefully make their lives slightly easier!

I  also have worked as an Outreach ambassador since first year and it is such an excellent opportunity. I especially enjoy the spring, autumn and summer schools, where I get to assist in teaching, mostly theatre and screen related projects. During a Summer School we did a site specific performance in Chelsea College of Arts, although I was assisting in the teaching, I learned so much about designing for live performances myself.

I also had the opportunity to conduct a workshop with the outreach programme for primary school children. They had a Willy Wonka theme going on, we laid out a huge sheet of paper on the floor and asked them to draw the craziest prop they could think of to add to the chocolate factory. The results were colourful, creative and absolutely bonkers! 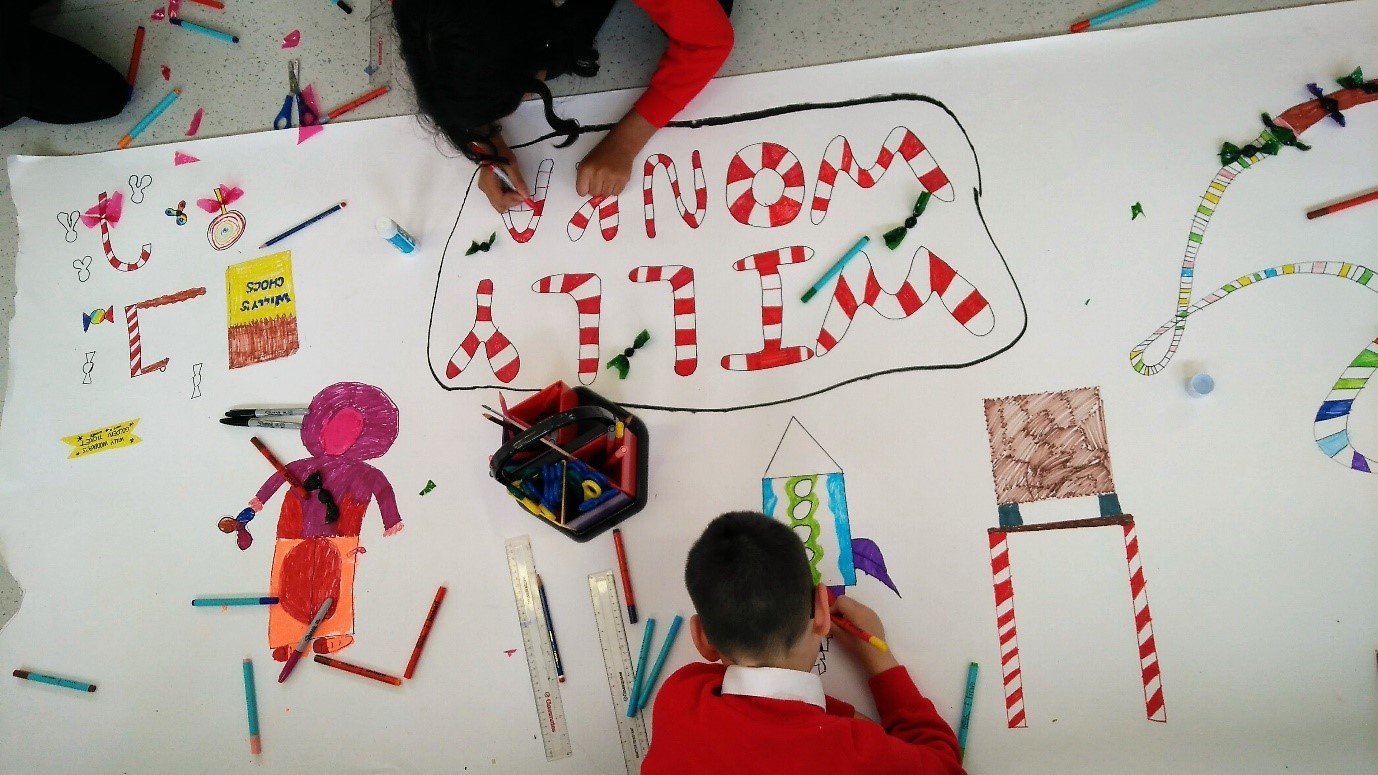 In my first year I ran for the Student Union elections on an impulse, which I then tried to get out of, I was a self-doubting first year and the idea of campaigning terrified me. But I spoke to the college officer at that time, Rob Reynolds, who talked about the things he was working on and the things he had achieved for the college. I realised I wanted to be able to fix the problems that bothered us rather than feeling helpless. Now, I am always glad I ran because as a college officer I hear student concerns and I can actually do something about it.