With only a couple of weeks until our Undergraduate Summer Show 2017 opens, we have invited students to talk about their final work and their experience at Camberwell during the past three years. In this post, we talk to BA Photography student Barbara Kovarik, who explains the process of applying liquid light to a her concrete sculpture.

After strongly refusing the idea to get into higher education in her native Hungary, Barbara began her quest for an art university in Europe when she discovered Camberwell. “I had not been to Camberwell before, and I only knew a little about the University of Arts London”, she says. She even admits aiming to get into the Royal Academy in The Hague, but then she came for an interview at Camberwell and that changed everything. “The environment and the friendly selecting process convinced me that I would like to study my BA here and nowhere else. I had a strange feeling that this was my place, and here I am three years later!”

When asked about her art practice Barbara’s face illuminates, explaining her main interest to be, “finding out if art can be exhausted. I find a peculiar relation between theories about death of art and the end of history. For instance, what keeps art in production when it has become obsolete? Or what type of  art can we create that would benefit our society?”

Although she claims she is not trying to make public art, her degree piece has an architectural reference that includes sculptural features. “My work is mainly photography based, imagery is a core part of my work, whether the imagery is moving or still. I like to combine them with sculptural elements that when displayed become mixed-media installations.” 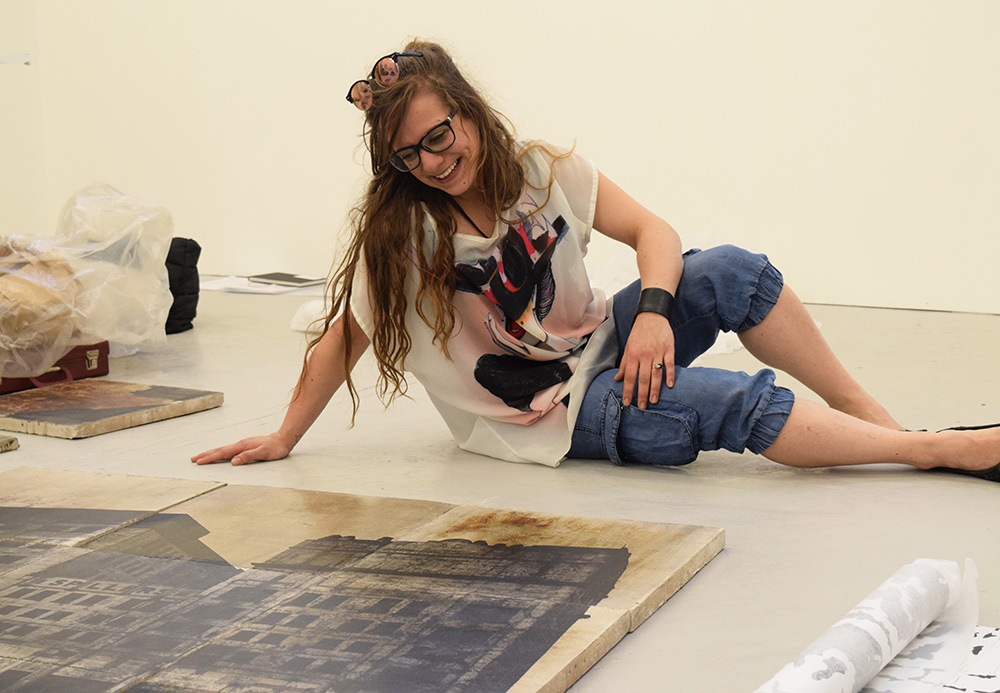 Barbara with her finished piece

Tell us about your work for the Summer Show

My piece is called Spieler, which is a photograph printed on concrete slabs with liquid light. The idea to use concrete as my canvas is reference to the highly celebrated modernist architecture. I find it extremely upsetting that some brutalist masterpieces become subject to demolishment as new regeneration has to take place, and that we are not able to distinguish between changes that are driven by market forces and the ones that would mean real progression. I’d like to generate human consciousness in order to lift up the sunglasses that capitalist realism forces us to wear. The process of making this piece itself reinforces this idea.

The idea to use concrete as my canvas emerged during the Balfron project, it seems to be a logical decision to work with a material that is the trademark of modernist architecture, specifically common within Brutalist architecture. For the printing I used liquid light (also known as silver gelatin), it is a fluid material that allows you to apply it to most surfaces, and then it becomes light sensitive. As an analogue photographic process, although it might appear difficult, it offers an alternative to convectional printing methods. 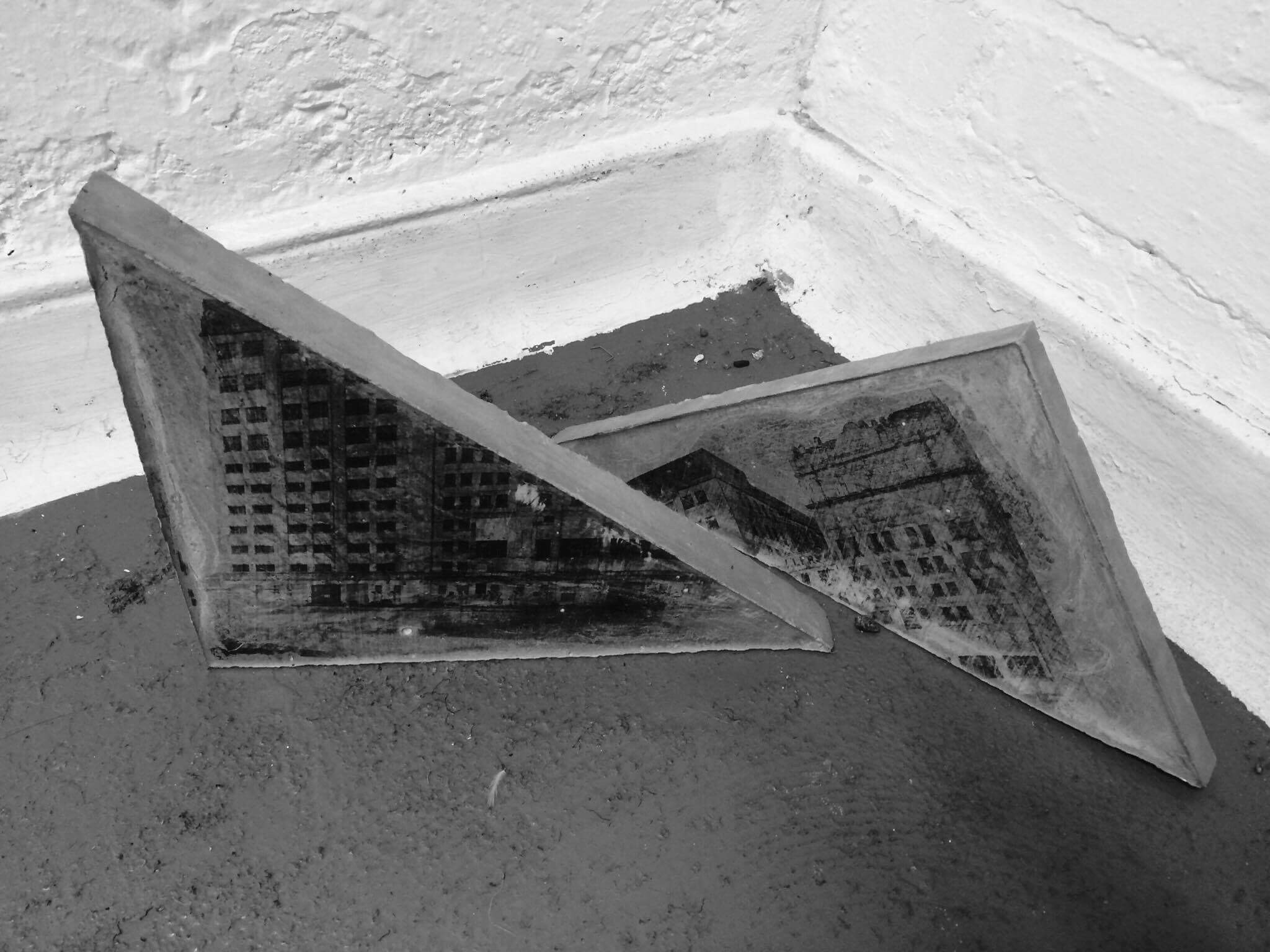 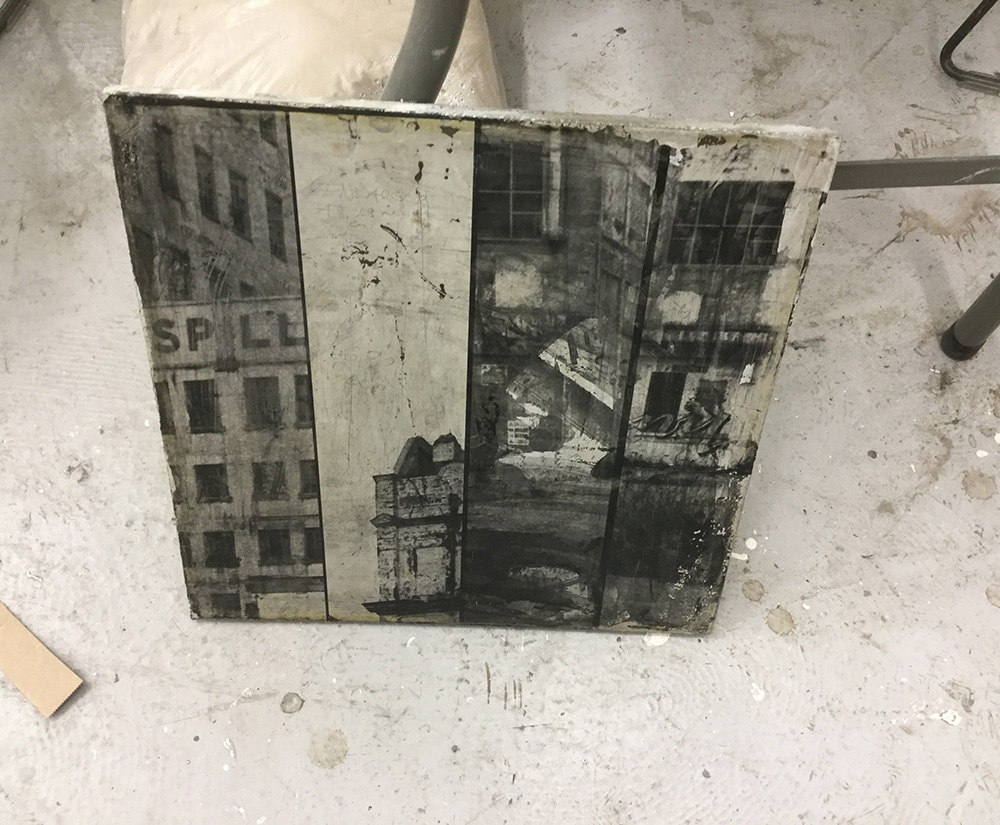 As the process itself is extremely sensitive and unpredictable, most people just give up very soon after the first attempt. The main difficultly is the coating, if it is applied poorly the marks will show up on the final image. Also if your surface is too smooth, then your liquid light will just slip off.  You have to either pre-coat or sand the surface so that the liquid light would stay and stick onto it.

I tested sealing the surface with oil based clear varnish, unfortunately it cracked the image itself, also I ended up with a yellow tonality that did not help the required image quality.

Washing your surface with a sort of alkaline is recommended as it balances the acidity of the developer. Washing times are also extremely significant when it comes to applying liquid light onto concrete. Concrete if it is not sealed, as it is a naturally highly absorbent material, soaks up a lot of the developer, and after it has dried up it causes to a sort of rotten yellow-greenish marks during the drying time.

The problematic aspect of the coating appeared more intensely when I tried to do it on a large scale. I have tested many different coating techniques such as roaching, plastic, and a variety of brushes. Also I had to digitalise the original negatives, the Hasselblad scanner did an amazing job, then I turned the scan into a digital negative with the help of Photoshop and used this negatives as contact prints, as this was the only way of getting to the desired scale. It takes a lot of tests and failed attempts to get to the end of the process. 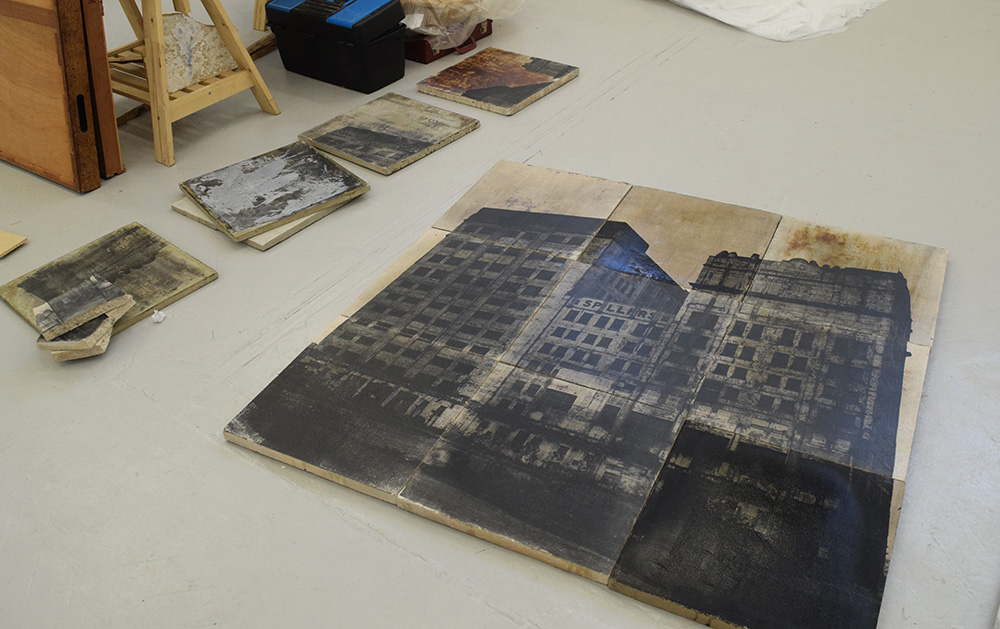 How has the course helped you develop your creative practice or work towards your career goals?

Camberwell is a place where you can develop your ideas freely under no pressure, it is a very encouraging environment where creative vibes can flourish!

Here I’ve learnt how to work in the darkroom, and I got familiar with traditional photographic processes that I had never done before, previously I only worked with digital images. It has really opened up my practice, as I came here to study fine art photography, now I work with installations and applying sculptural elements into my work.

Working with video is another thing that Camberwell got me into. I feel you gain the required experience that is not far from the professional industry standards. Another important aspect is the connections you make, I have learnt a lot from the people around me.

Camberwell also got me into the habit to use a studio, previously all my works were created in random off-site spaces. I have only just realised how beneficial for your practice it is to have a studio space.

Generally speaking about the Camberwell experience is amazing, but that comes from commitment and willingness, the more you put into the course the more you get out of it, but I guess that applies to every aspect of life.