Camberwell Undergraduate and MA Conservation Summer Show 2017  is taking place this week across Peckham Road and Wilson Road. Earlier this week we caught up with BA Illustration student Holly St Clair to talk about her experience at Camberwell and her future plans.

Holly works with ceramics, print, book making and drawing to explore ideas about communication. She was born and grew up near Kingston in South West London but moved to Camberwell last year where she set up Hi Bye Studio.

Please tell us about your design practice

I would say that I’m really interested in how we communicate – semiotics and stuff – but I think really I just like drawing smiley and sad faces on things. I’ve become a lot more comfortable with making more personal pieces inspired by the events in my life, so my practice has basically become praising and lamenting Tinder. I’ve always found the world of dating really bizarre, to be honest. As fun as it is, if you think too much about it it’s properly weird! Particularly now with the added online element, it’s all a bit like, “Hey, I like you. Want to share saliva? How about Facebook friends?” 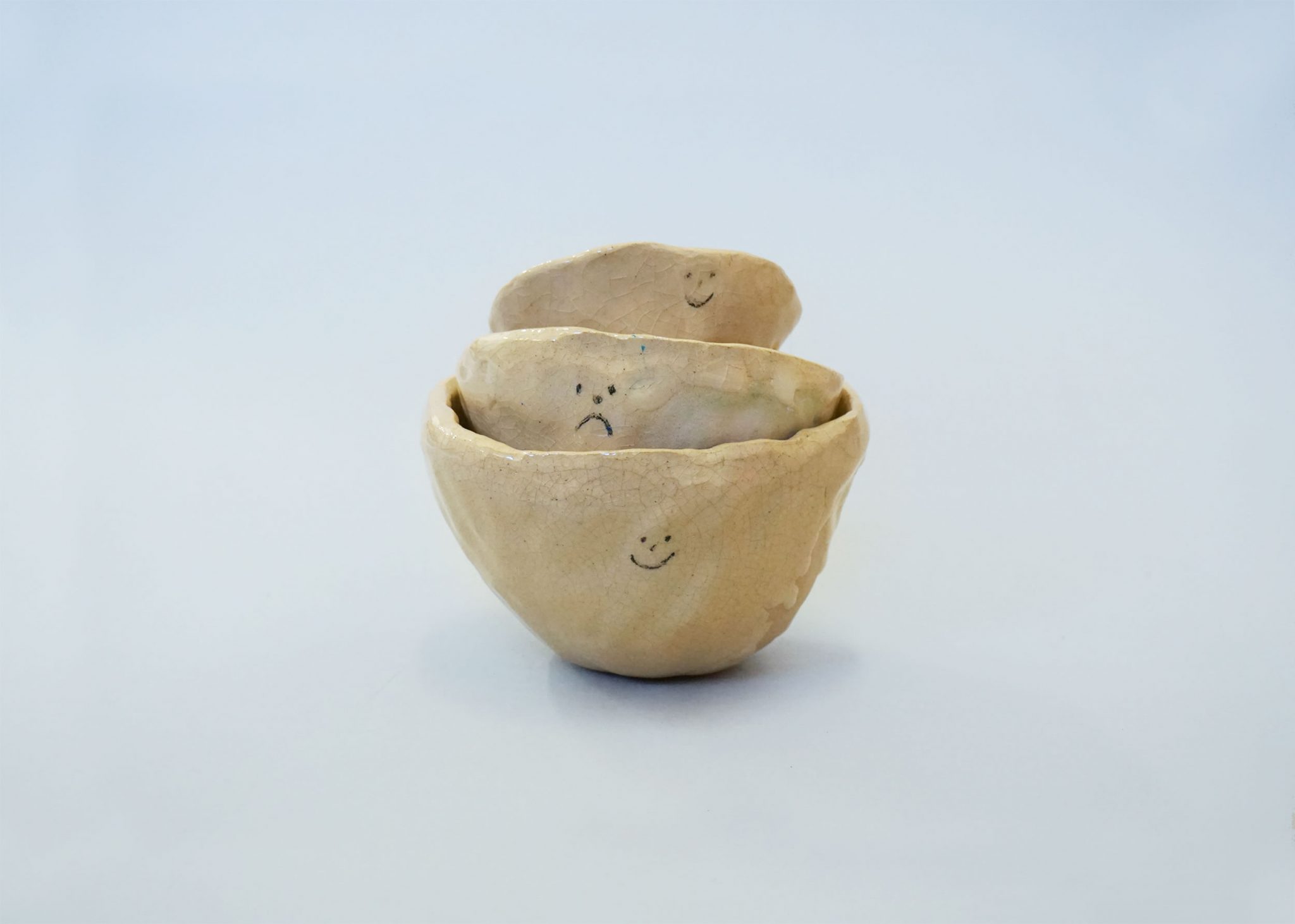 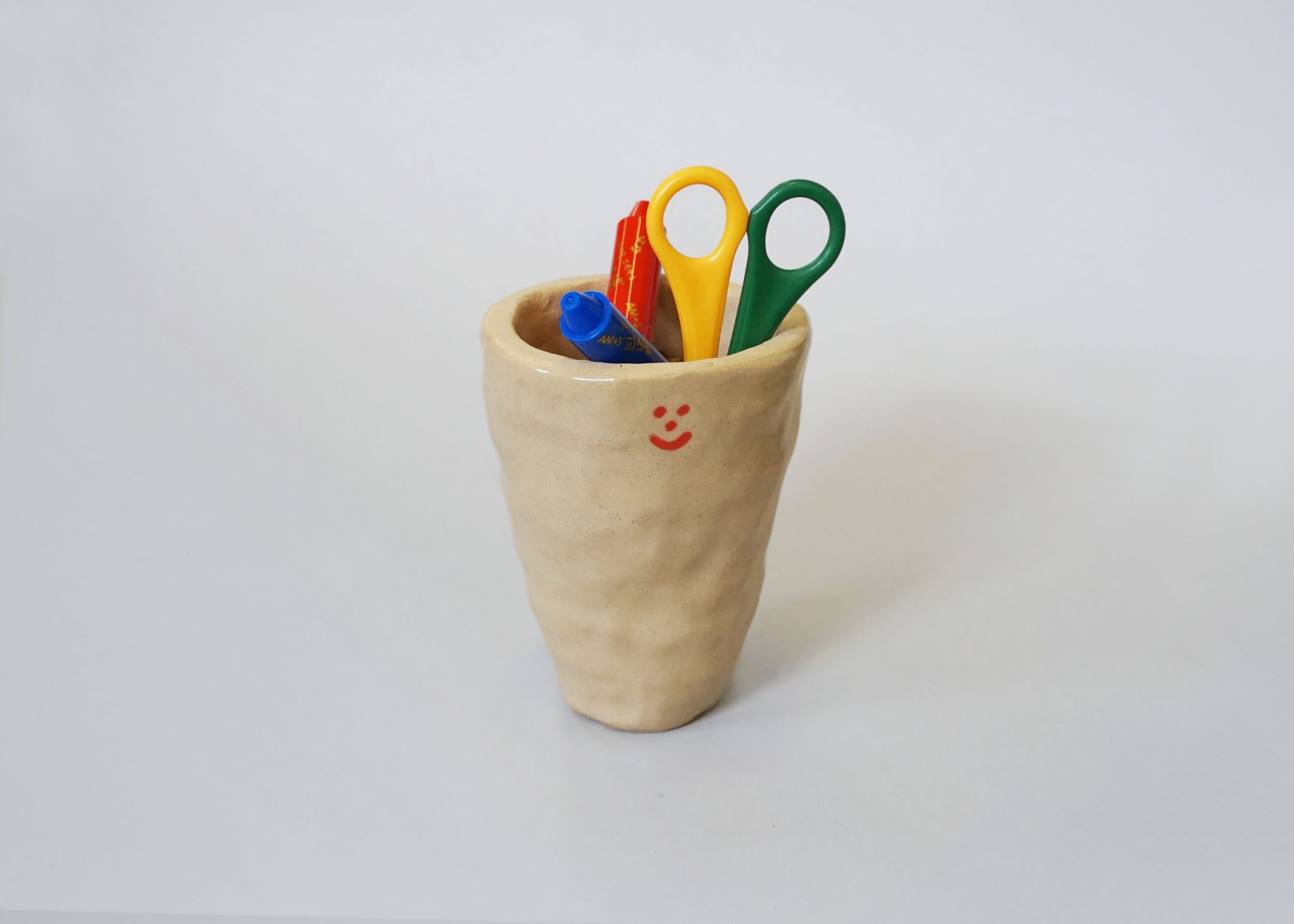 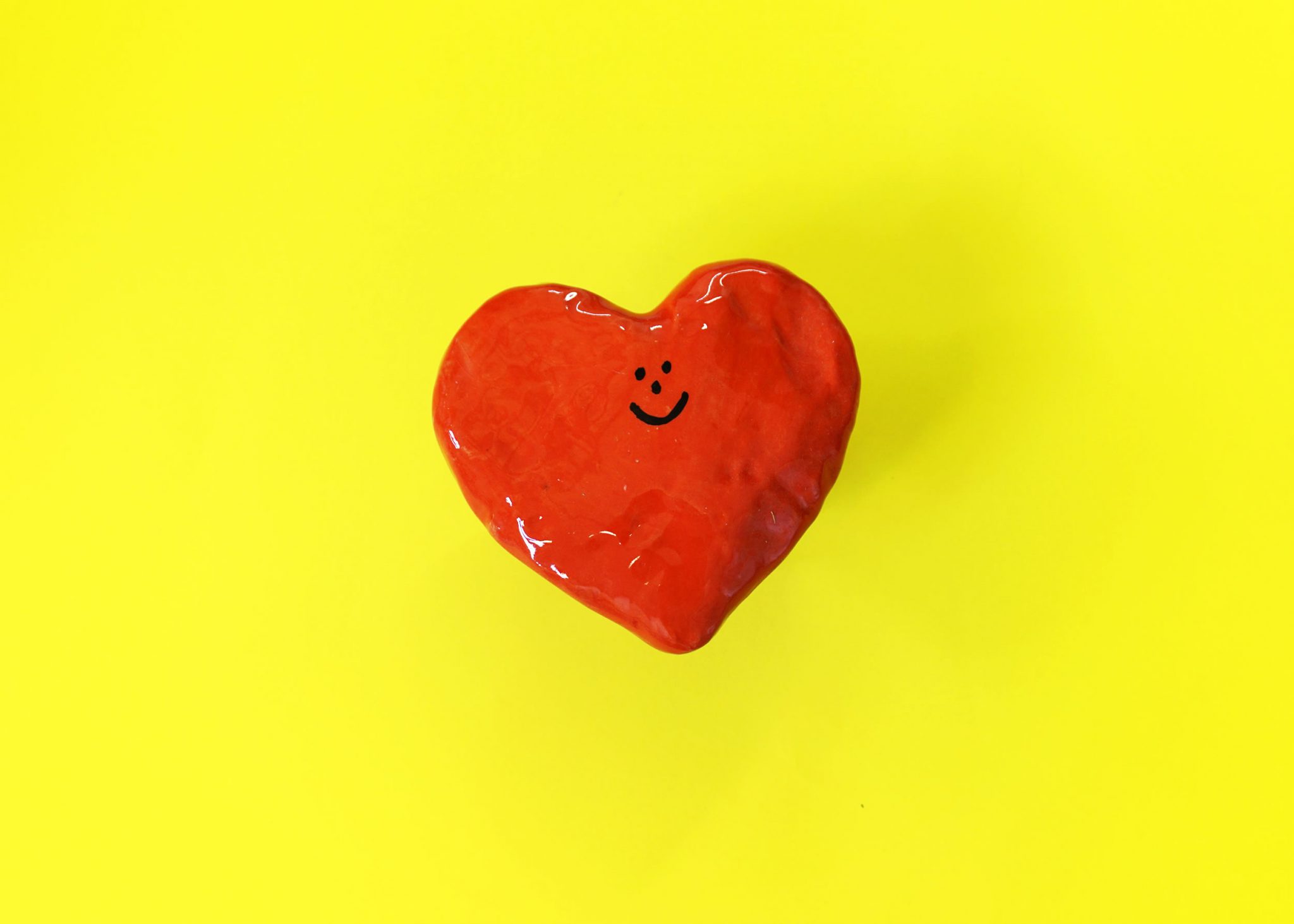 What about your final piece?

My graduate piece is all about how strange it is to be in a relationship now. Culturally I think we have picked up some bad habits – what does it say about us that the term ‘ghosting’ is a thing? I’m hosting an open forum inside my installation on 23 June. It starts at 5pm and is open to everybody, feel free to come along and chat!

I also have a collaborative practice with my friend Lily Kong called Hi Bye Studio. We run workshops, make zines, and host events, it’s all about bringing people together and using art and design to provoke conversation. 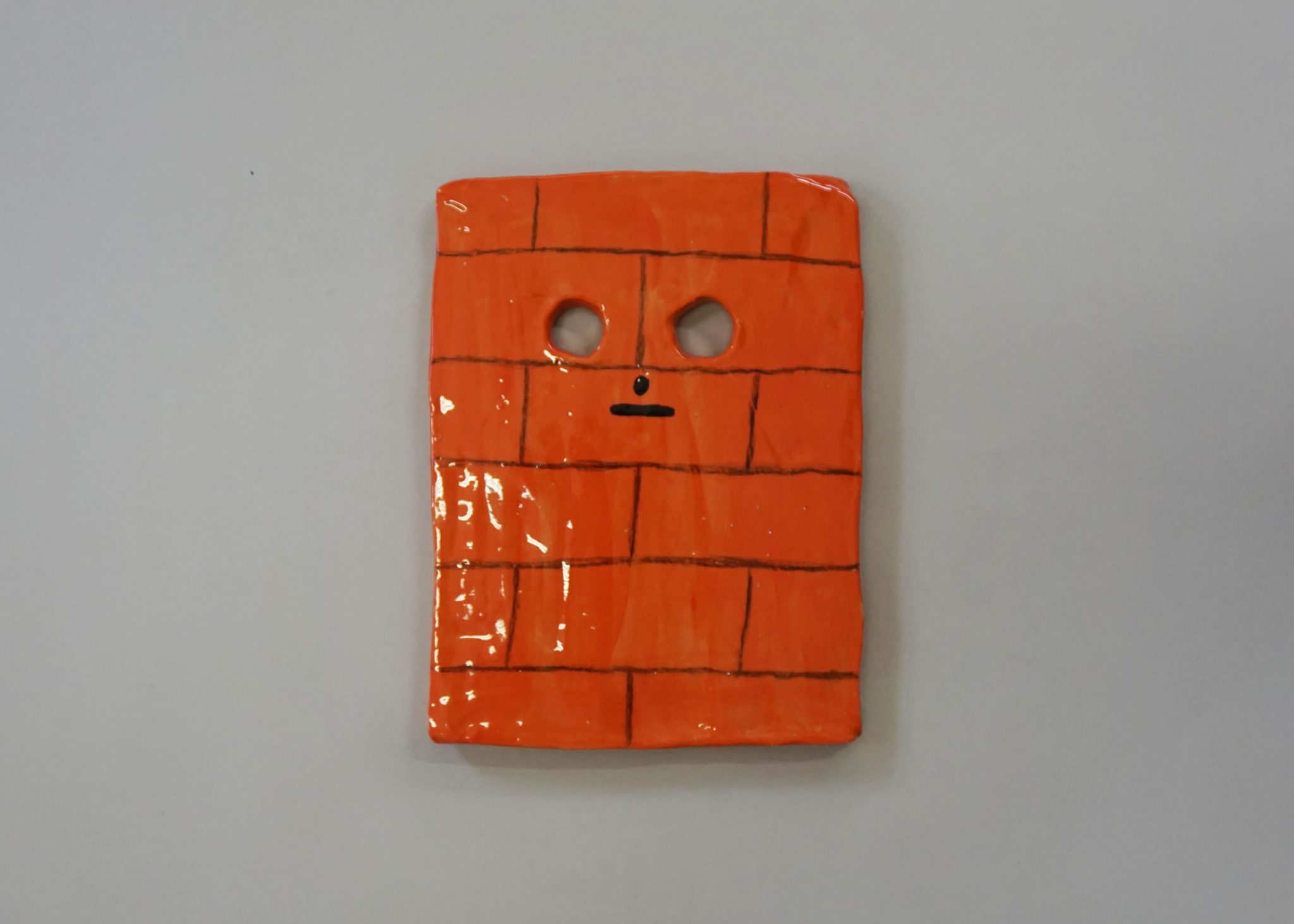 Is that what you’ve been working on lately?

Yes, for Hi Bye Studio, Lily and I are currently working on a collaborative zine with some pals of ours. We hosted a little field trip to Kew Gardens and had a lovely day drawing plants. Eventually those drawings will be collated into a fun little publication!

I’ve also been working on a few commissions, some of which have been super fun! I designed a Risograph print for the Brighton-based Family Store and just finished a flyer for Square Pegs, a sweet little company that runs children’s workshops.

At the moment though, I’m trying to make more zines and publications. I want to collect those stickers you find on shop shutters. I’ve found some really rad ones with some properly terrible graphic design that would be interesting to archive. 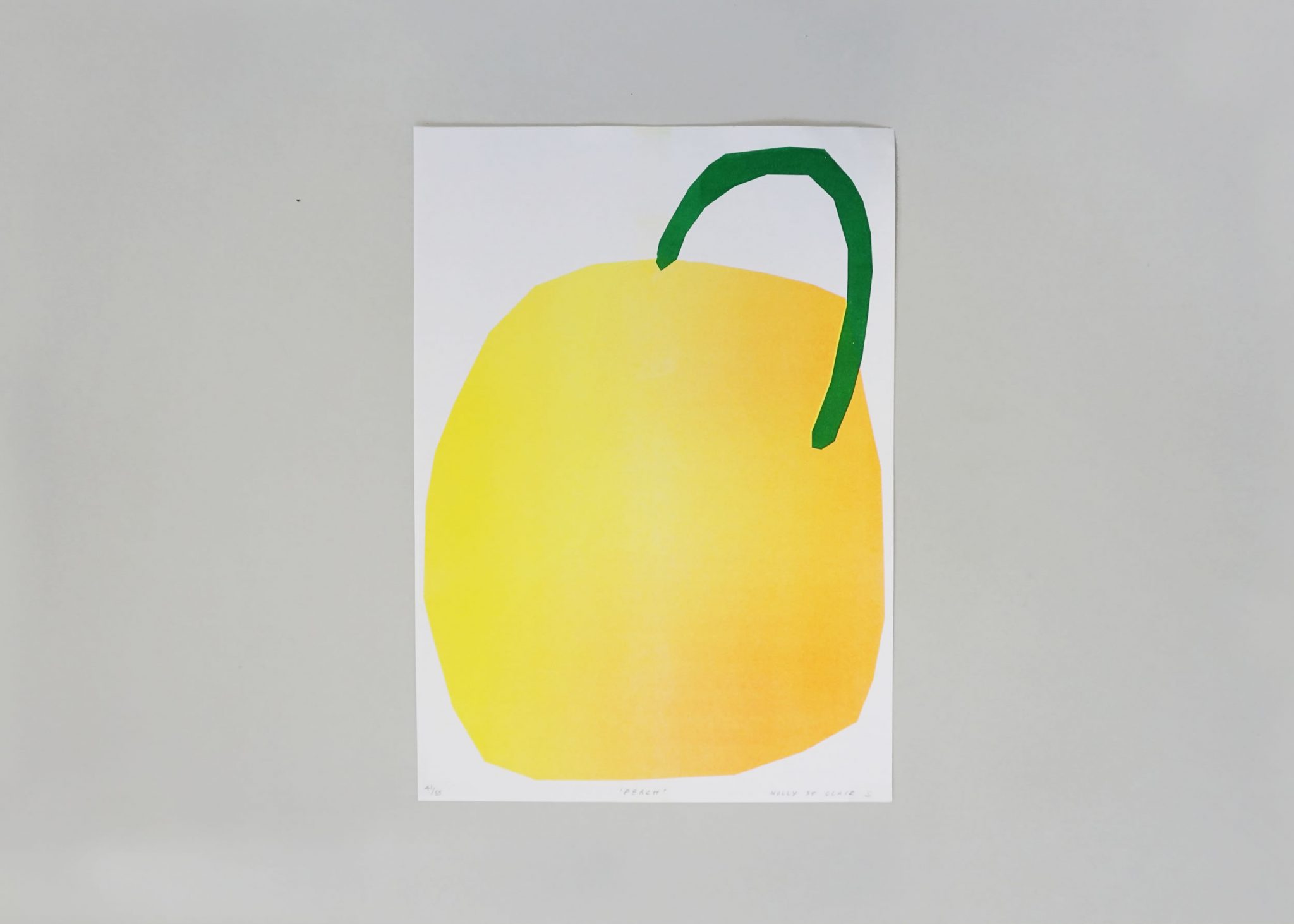 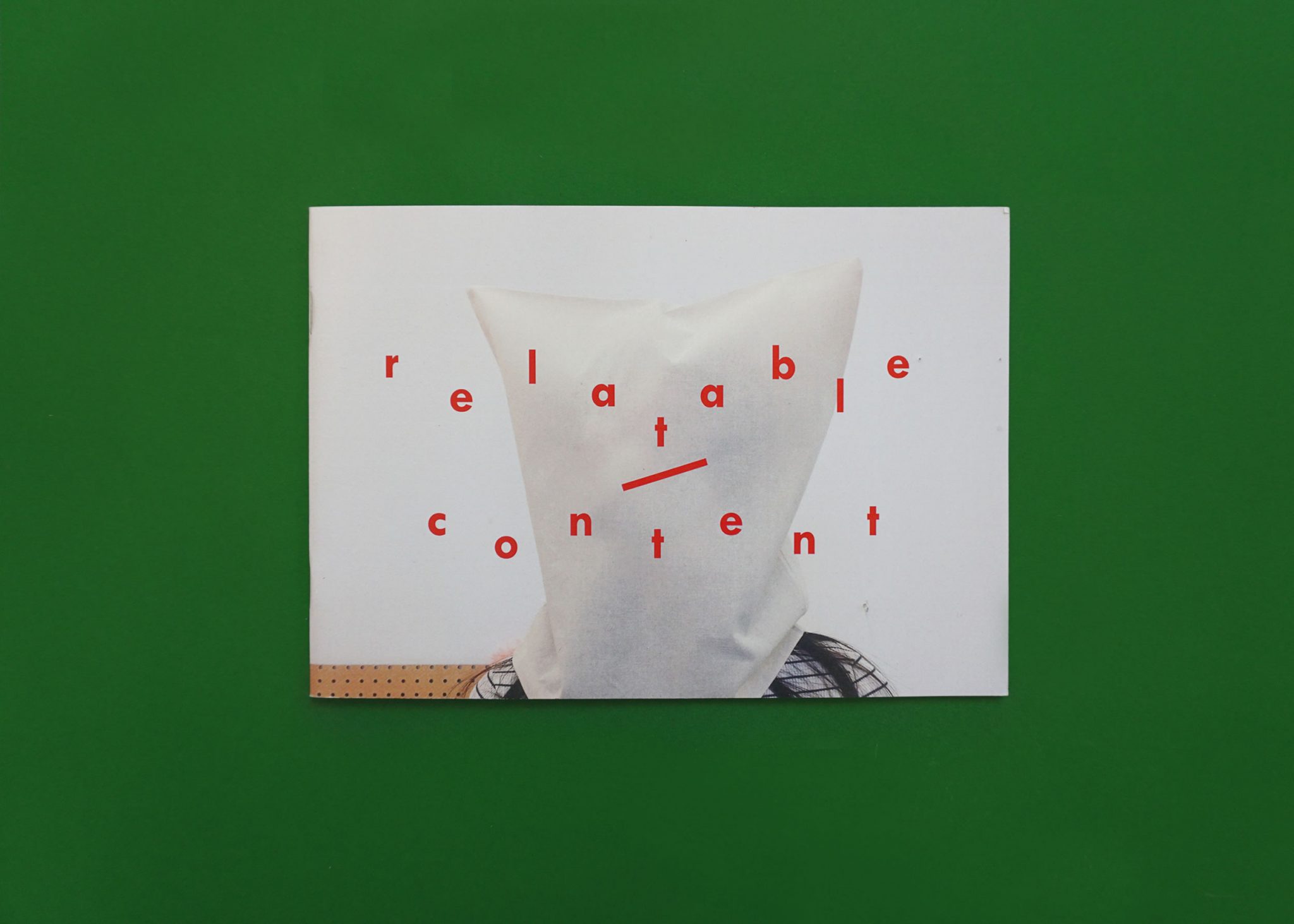 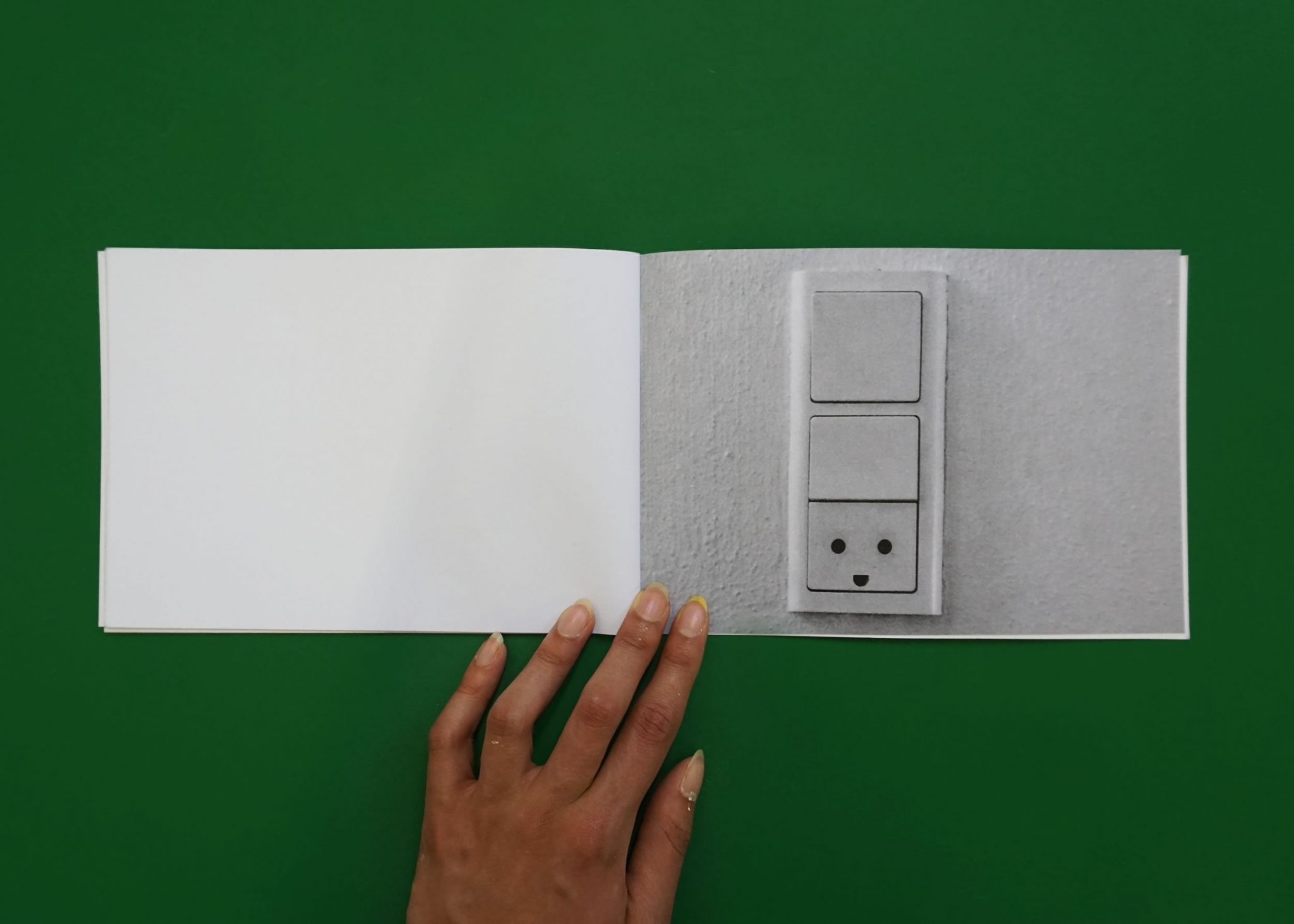 How has studying at Camberwell informed or influenced your design practice?

Camberwell has taught me to be more ambitious. I’ve been encouraged to think about illustration in a wider context and the cultural impact that it can have. I would have to say the most important thing I’ve learnt however is resilience. A few months ago I started some medication and developed quite a bad tremor in both my hands which means that drawing a straight line is nearly impossible now! Thinking back, three of four years ago I reckon this would have devastated me, I might have just quit all together. My course has taught me that my limitations can be attributes: adapting to my shaky hands has been one of the best things that’s happened to my work.

What have been your highlights of your time here?

Our course did a project with Camberwell Press, so Hi Bye Studio submitted a proposal, which was accepted and our publication was put into production. It was a pretty great feeling seeing our publication in the South London Gallery bookshop, and we’re super proud of what we managed to make! Another highlight would have to be a mini solo show I had last year called ‘Boba Dog’, it was about how food helped me to reconnect with my heritage. 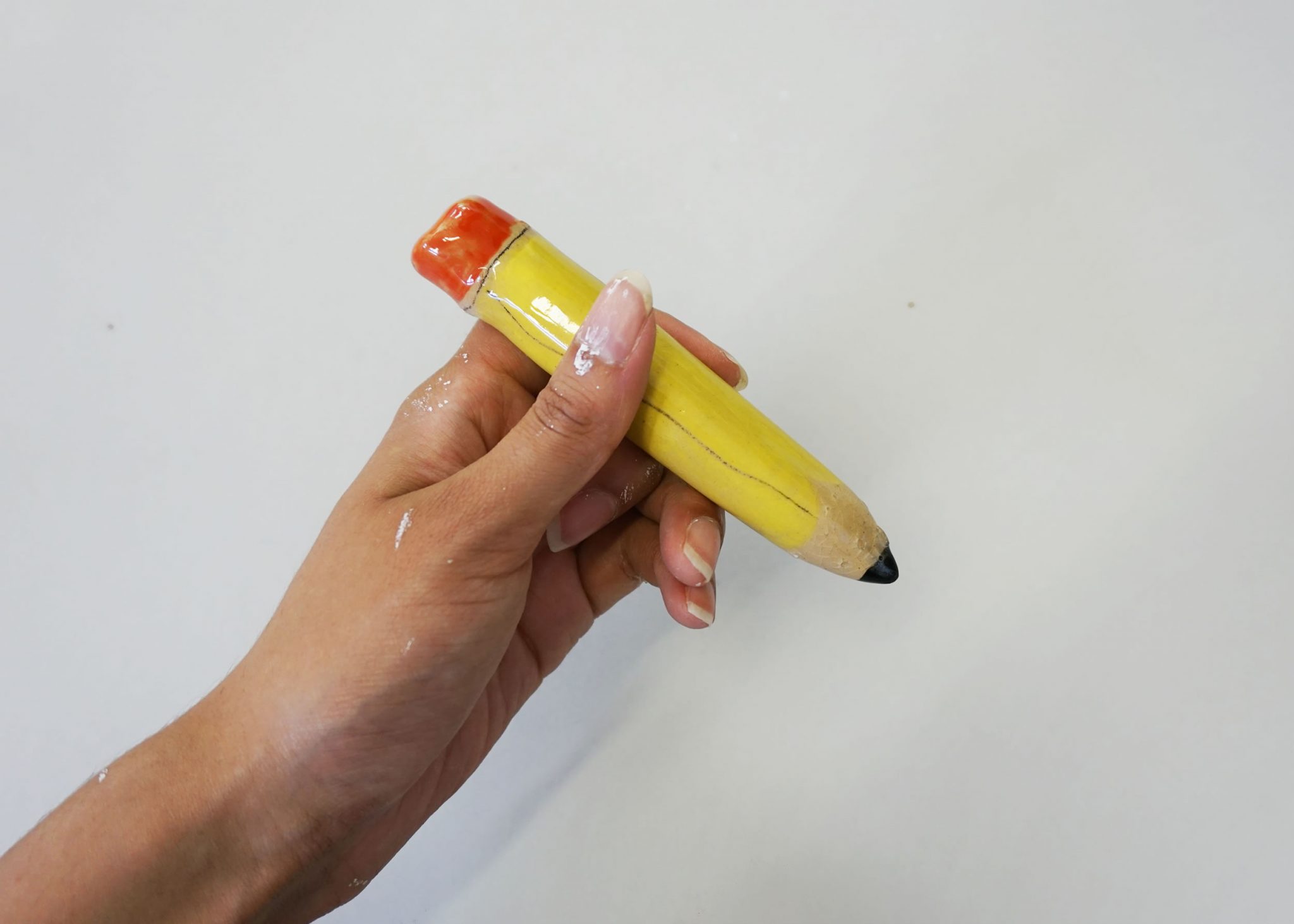 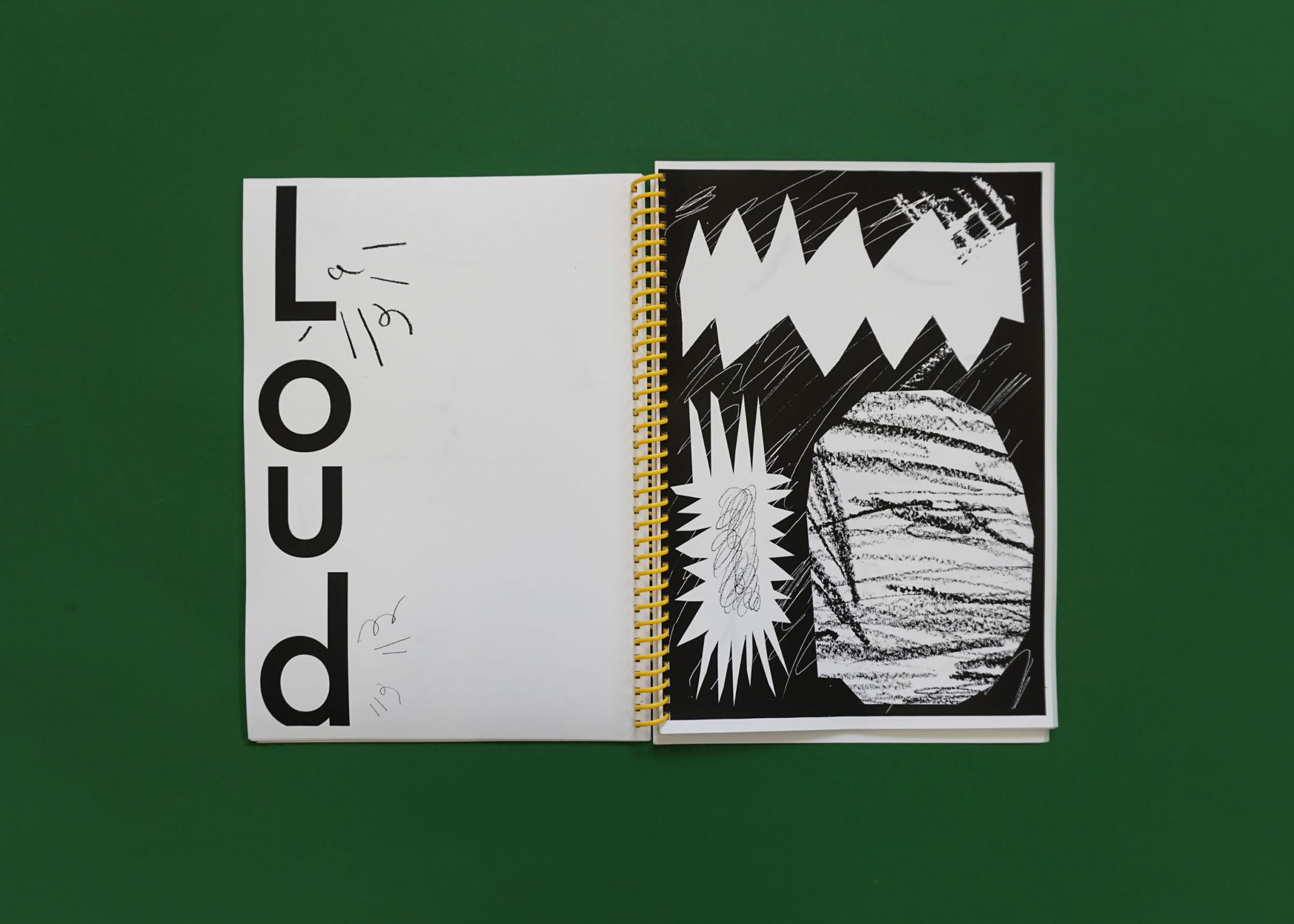 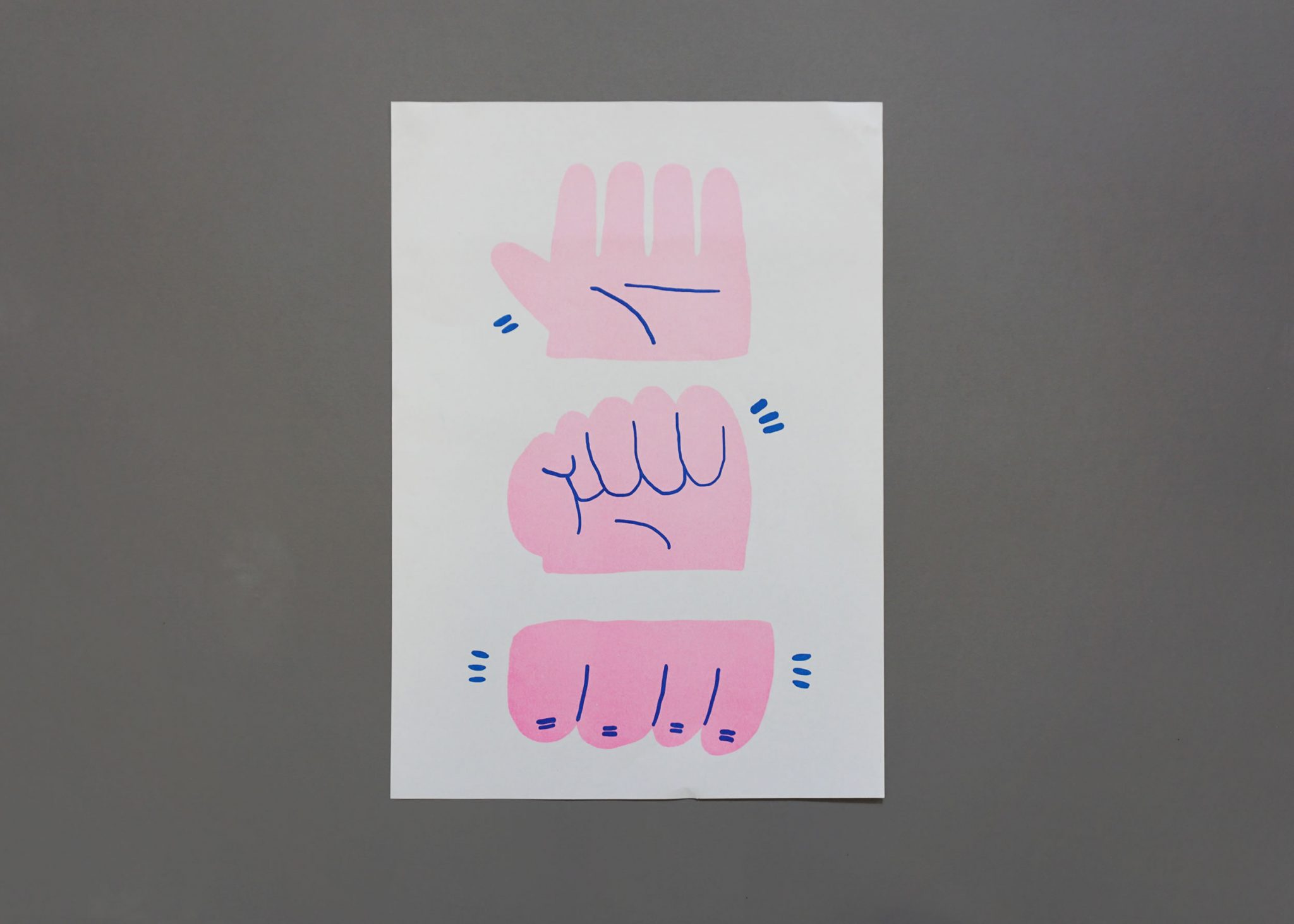 What would you say has significantly influenced your work?

My mum’s Asian so I grew up consuming a lot of anime and manga, and had access to this whole poppy and idiosyncratic visual culture that isn’t nearly as prevalent in the West. It had a huge influence on me stylistically. I can’t really pinpoint a particular artistic interest, I think it’s pretty obvious that I’m a huge fan of Misaki Kawai and David Shrigley – actually, my ex was a designer and our break-up (as well as the awful Tinder dates that followed) were the inspiration for my final project this year. These days I’m mostly inspired by my personal experiences, I just want to be known as the Taylor Swift of illustration. Watch out lads!

Holly’s work will be on display at the Undergraduate Summer Show 2017 from 19-24 June.