Richard Manders aka The Man Trout has just completed the MA Visual Arts: Illustration course at Camberwell. Richard originally hails from London but now lives on the south coast in Worthing, West Sussex. Richard tells us about life as The Man Trout illustrator.

Can you please describe your art/design practice?

I am a half man/half fish illustrator who has been predominantly focused on reportage and editorial Illustration during my time at Camberwell. Within Camberwell I have been looking at the journalistic relationship between text and image and how to interpret a conversation through Illustration. Outside Camberwell I have mainly been working as an editorial illustrator who loves garish colourful caricatures, dark stories and presenting a slightly skewed version of reality.

Born out of a desire to show how empowering it can be to talk to each other, to share experiences and stories, my final collection for the degree show ended up being called ‘The English Cacophony’. It features bits of illustrated conversations with a prison worker, a 90 year old Punch and Judy Professor, an airport chaplain, an eccentric toy shop owner and the matriarch of working Lancashire farm. These are all joined together with an accompanying audio piece – I worked with the musician Steven Troughton to edit my recorded conversations together with his accordion music underneath them. (Listen to the audio below) 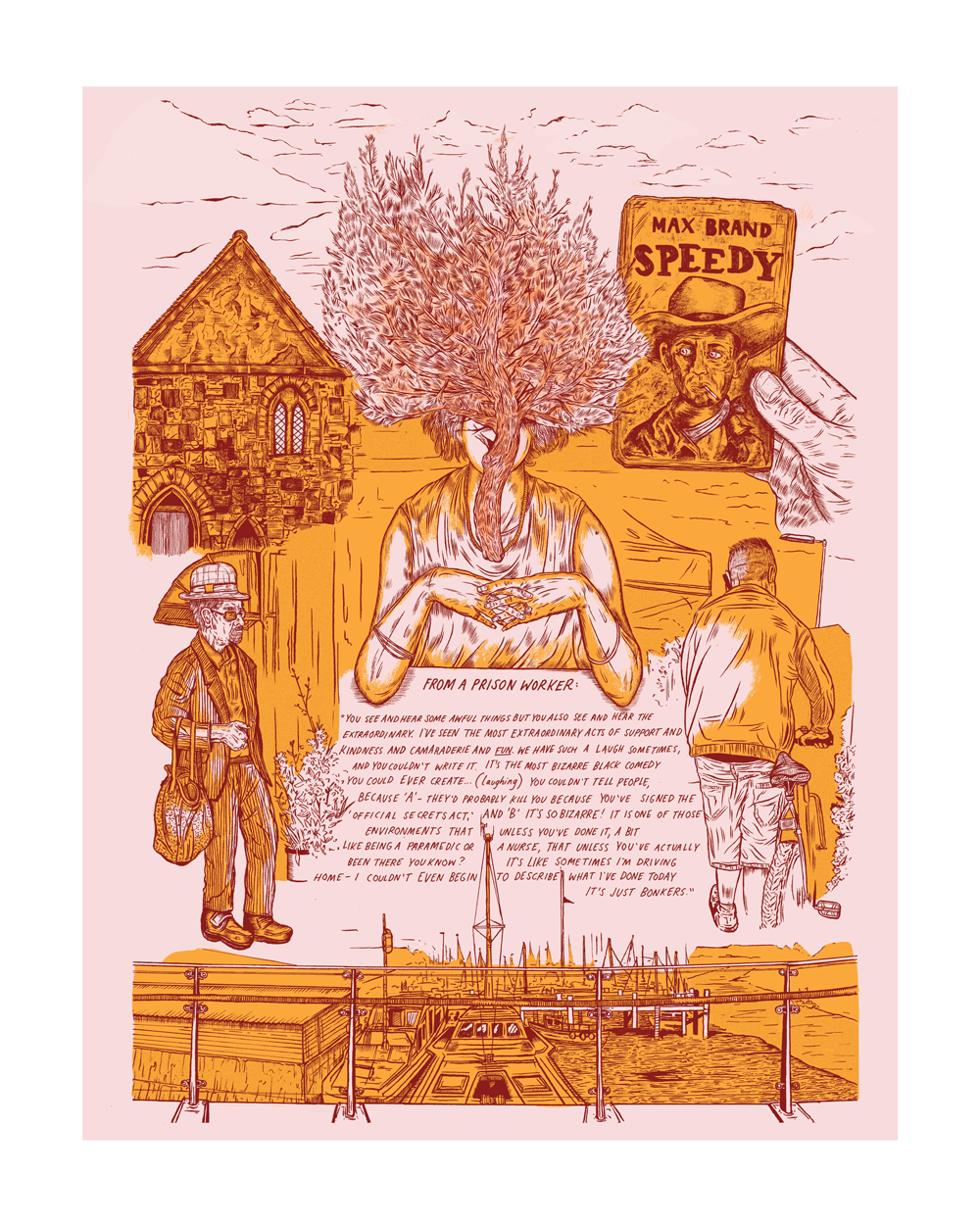 The images were mainly completed with pen/brush and ink, and then digitally coloured. I also made a small book, based on my conversation with Punch and Judy Professor Glanville T. Magor, which was done with watercolour and pencil to try and emulate the Punch and Judy theatres of the past. I tried to respond naturally to each conversation and not worry if a reaction seemed obvious, but instead followed my instincts and worked quickly from my sketches, notes and secret snaps from the conversations, to try and create an overall impression of the time I spent with each person. I am also part of this summer’s Punk London campaign celebrating 40 years of Punk; my image for the Association of Illustrators (AOI)/London Mayor’s Office competition was one of the winners. So far it has appeared in Time Out magazine and will hopefully pop up in a few more places too. I became aware of the competition when our course leader, Jan Woolley, flagged it up – it felt like something fun to do outside of my comparatively straight coursework. This was done using brush and ink and digital colour, in a way developed through editorial work done outside of the course. The idea was to splice together disparate snapshots to create a monstrous and energetic punk Frankenstein.

How has studying at Camberwell informed or influenced your art/design practice?

Camberwell has allowed me the space to take my work seriously and to prioritise Illustration. When I joined the course I just said “I like to draw”, but I would now consider myself an illustrator. This wasn’t born out of lots of experimentation or a single amazing piece of advice, but from the conscious decision that I wanted to be better, and the only way to be better was to fall in love with it. I still desperately want to be better and, fortunately, am still in love with it. Long before I decided to take my love of drawing seriously and force people to look at it, I was an avid fan of many illustrators and many different genres of illustration. On coming to University I was interested in the history of reportage Illustration and how artists like Paul Hogarth and Ronald Searle would report scenes from un-photographed or unreported parts of the world, or how Robert Weaver would be used to report an event for an American magazine in the same way we would now expect a photographer to work – not in a traditional editorial role but using the illustrator as another reporter, Illustration as journalism. Alongside discovering older texts and artists I maintained my love for, and continued to discover, new and exciting illustrators/artists. A small list of these, who I think everyone should know are: Erik Svetoft, Sam Vanallemeersch, Kristina Collantes, Manuele Fior, Gipi, Eleanor Davis and Vincent Perriot… to just name the ones currently open in tabs on my browser as I write this.

‘The English Cacophony’  is a work in progress and I will continue to record and draw interesting conversations around the country for the foreseeable future. I’d say it feels particularly relevant right now, especially in this post-referendum fall out. Outside of this I hope to continue developing my editorial voice, and become ever better at communicating what I want to in the most arresting fashion I can muster. I am also linking up with course-mate Dan Margetts to form an Illustration gang of two, in which we can exorcise some of our collective demons…or maybe just draw them. Can you recommend an exhibition must-see?

Well, after coming to see the MA shows at Wilson Road, where you’ll see the pen droppings of illustrators like the amazing Yoo Hyemin and her incredible paintings, or the weird wormy pen and ink wonders by Dan Margetts or Hannah Redpath’s interactive ceramic people and food, to name far too few of the excellent people showing ( www.camberfellows.com ) you’ll probably be all ‘arted out’, so I’d suggest heading over to Deptford Cinema which is a great small cinema, run by a group of lovely people doing good things.

It’s showtime, how are you feeling?

The Illustration MA has a large number of students showing a great array of work, and so fitting us all in was always going to be difficult, but course leader Jan did it. The few days of preparing and hanging at Wilson Road was a mix of D.I.Y. nightmare and a great chance to see everyone’s work, to come together as a course and help each other out.

Do you have any plans for this summer and/or any recommendations?

It was recommended by our course leader that we should all try to have a proper break post MA but, both unfortunately and fortunately that’s not something I am able to do. My summer plans involve working, drawing (lots of drawing), and trying to maintain this end of term momentum whilst having some fun doing it. 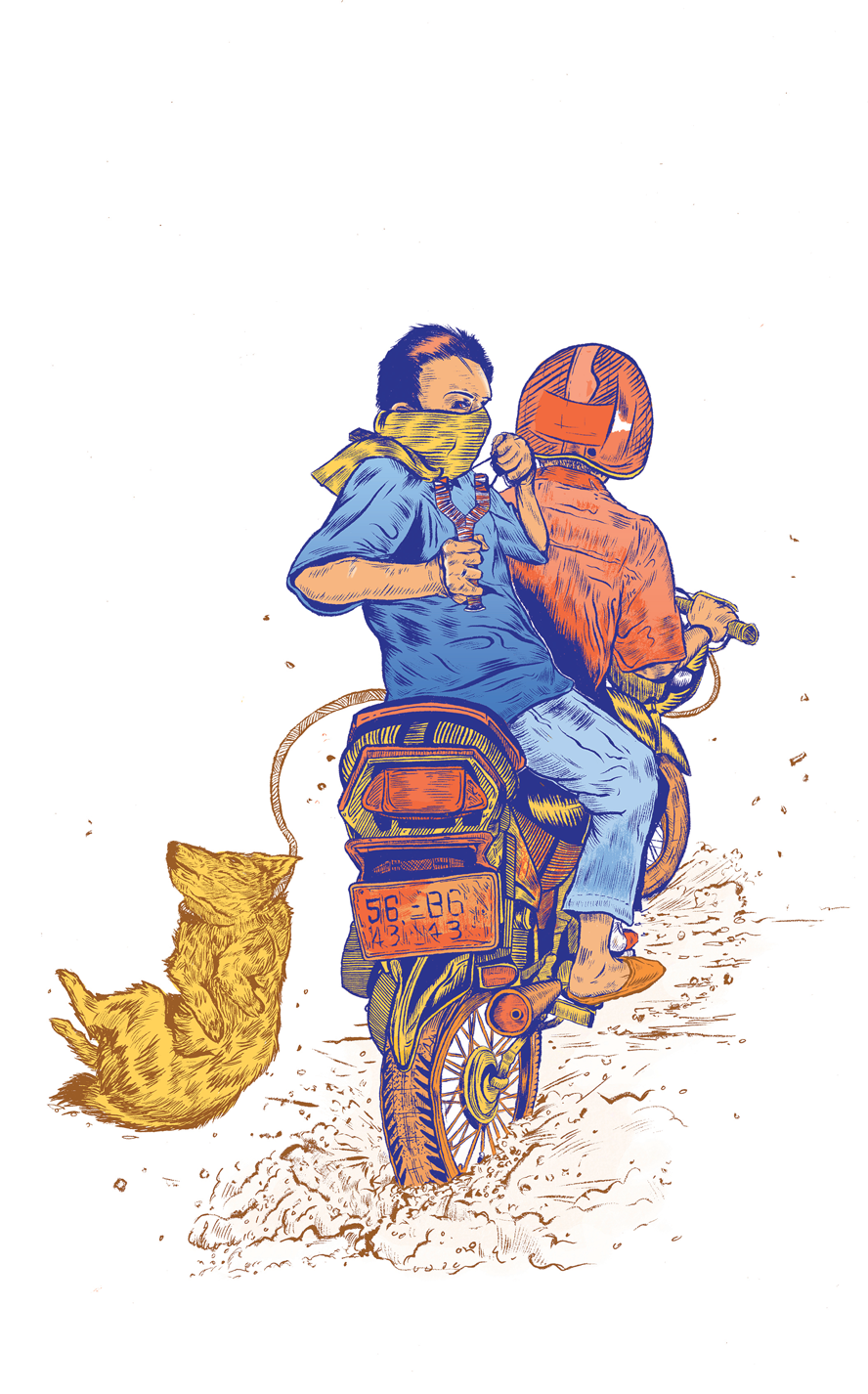 And finally, do you have any advice to students looking to start (your course) at Camberwell?

My advice to any student that start this course is to treat it professionally – go to the lectures, visit the library, use the tutors available to you, make friends with the technicians, and draw all the time. I don’t think I necessarily made the most of everything that was available to me as I commuted from Sussex (not a great idea), but pursue the things that interest you feverently, become knowledgeable and demand that you become better… and go to the Pelican in Peckham for bagels with course-mates for group therapy sessions.