Artist Queenie Clarke is a graduate of BA Drawing at Camberwell College of Arts whose work shifts between architectural innovation, movement and interaction between viewer and sculpture. Following her graduation from Camberwell last year, she won the 2015 Vanguard Prize Studio Award, which provided her with a rent-free studio space for a year just over the road from Camberwell College of Arts in Vanguard Court, as well as continued access to the college’s technical facilities and expertise as she developed her practice post-degree.

This autumn she returned to the college with a solo exhibition of new work made during the past year. Displayed at Camberwell Space Projects at Wilson’s Road,  the exhibition showed site-specific works made to respond to the architecture of the building, transforming it to create possibilities for the viewer to engage physically with both the space and the work.

We spoke to her about life after college and how winning the prize has helped to develop her practice. 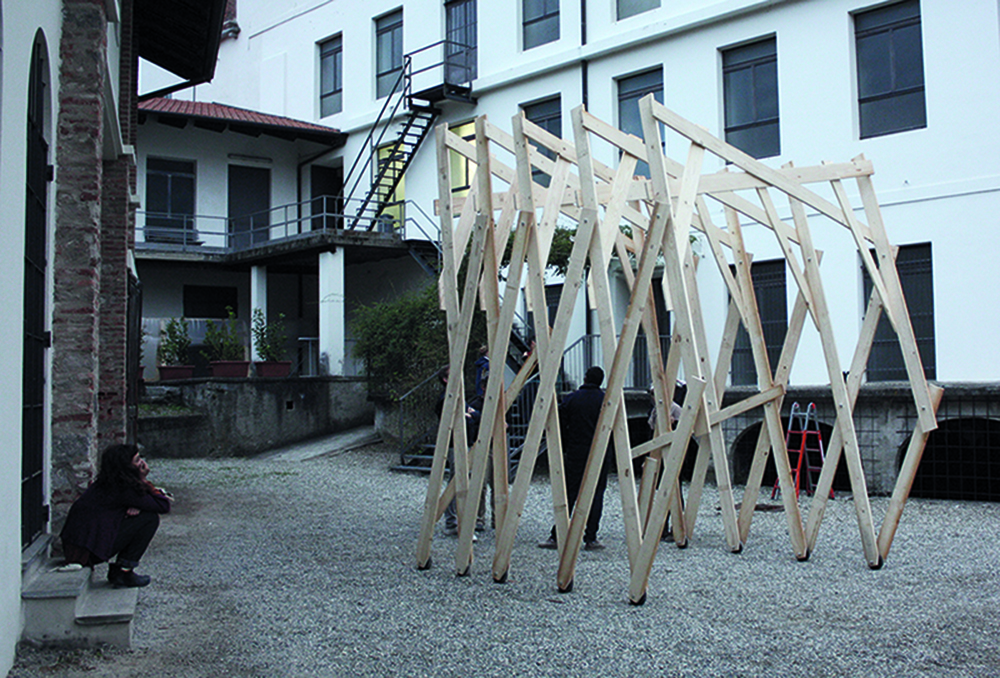 At Camberwell, my work in second and third year circled around interactive sculptures. However, they didn’t always go to plan so many ended up static. This year, I have found that being outside of the structure that a degree gives you has meant that I have really pushed the ideas and projects that involved movement, as I can spend so much more time focused on just trying to get something to work.

Why did you apply for the Vanguard Court Prize?

I applied because I think it’s amazing to have the opportunity to maintain the contact time with Camberwell’s technicians and to have access to such a huge amount of space straight out of university. At the time that I made the application, my work was getting larger and I was beginning to use steel so the prospect of having the chance to carry on with these ideas was really exciting.

Can you tell us about how the prize has contributed to the development of your work and career?

Well, I suppose it follows on from the previous question – the time it enabled me to have was so valuable. With my work, I am learning new technical skills for each project all the time, which is definitely crucial to the development of it. For example, I made laser-cutting templates for a model I am building so I can use a router to cut the pieces myself. It sounds pretty simple, but I am not great at Illustrator and wasn’t that confident with using a router so having the chance go back into university and ask technicians for advice meant I could use this technique for future projects. Tell us a bit about your work: was having a studio space to work integral to that?

I think as an artist you kind of have to always work with what you have, so maybe it would be a bit dangerous if it was integral. However, the space made a significant impact on my practice as I naturally felt like wanting to make large-scale work, so in this respect it was integral to the progression from the work I exhibited in my degree show. For my latest show I built a sculpture which involves a wall-like structure, stretching out and flipping back to its original state. It followed on from a project I began at university, which at the time I was unable to fully realise. 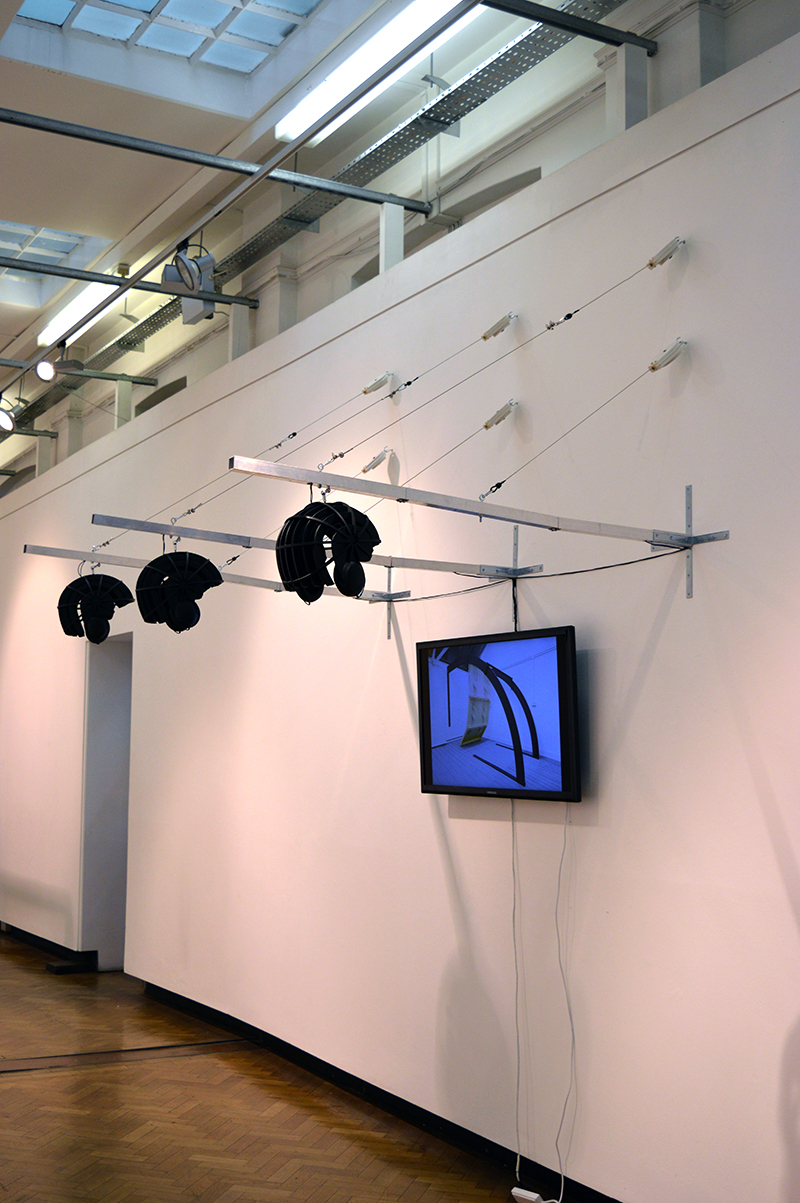 How did you expect your first year after graduation to be? Has the experience matched your expectations?

No, not at all – I thought I would end up having to move back to Eastbourne! Although I was determined that I would stay in London, I really worried about how I was going to carry on making work, especially because I had upped the scale so much. I’ve also been able to meet people from a range of different backgrounds such as ceramics and architecture which has meant a lot because, after leaving university, while it is great to keep in touch with the mates you made throughout your degree, everyone is so aware of each other’s work – so it’s nice to have fresh eyes on it. 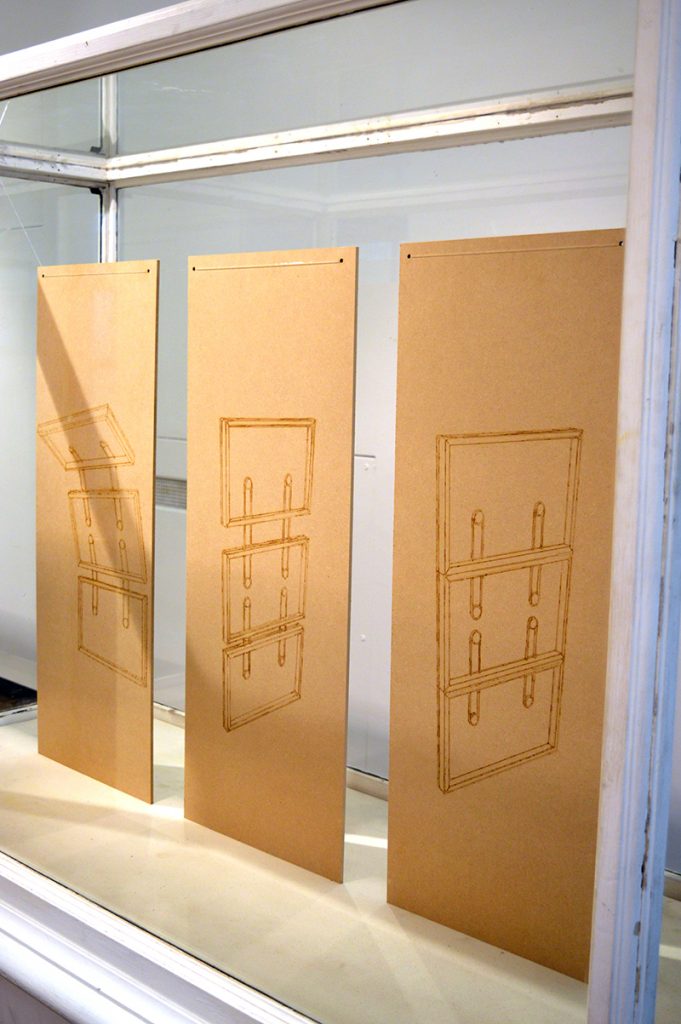 Finally, what do you have coming up?  Have you thought about what’s next after the residency ends?

In September 2015, just before starting the Vanguard Court Residency, I took part in a short architectural residency in Italy at the Cittadellarte. I would like to apply to more residencies abroad after this one ends – New York would be amazing.

Launched in 2010, The Vanguard Prize offers each winner a year’s free studio residence at Vanguard Court along with ongoing mentoring and support from Camberwell to help them develop their work and their career. The judges are looking for talented artists who can most bene t from the award. Previous prize winners include Alexander Devereux, Murray O’Grady, Philip Li, Philip Booth, Lauren Allen and this year the winner was Billy Crosby from BA Painting.