BA Painting third year student Lily Waite talks about her art practice, her time at Camberwell and what inspired the subject of her dissertation about the representation and fetishisation of trans people in fine art.

Please tell us about your art practice

My practice is mostly about my identity as a queer trans person. Over the past six months since I fully came out, my practice has begun to focus much more on directly addressing issues I encounter in daily life; both on a personal level and within society as a whole. As opposed to prior to this, when I was looking at similar themes, though in a more covert manner. I’ve used painting in my practice throughout my time at Camberwell, amongst other things, and it remains a large part of my work, although I’m beginning to use more methods of making work. I write a lot of poetry and for a long time I struggled to find a way to make my writing fit with my other work. More recently however, I’m using poetry to directly address issues such as self-love, self-worth, and resilience.

Through writing my dissertation I realised that in order to subvert harmful and fetishised representations of trans people within the art world trans artists need to represent ourselves. I’m looking much more about how to use myself as the subject of my own work; continuing the self-portrait photography I’ve been working on, accepting flaws I see in myself, and learning to love myself regardless. I’m also working on pieces that work to undermine traditional ideas of gender and gender presentation, questioning their relevance and their harmful, limiting effects, using my own body. 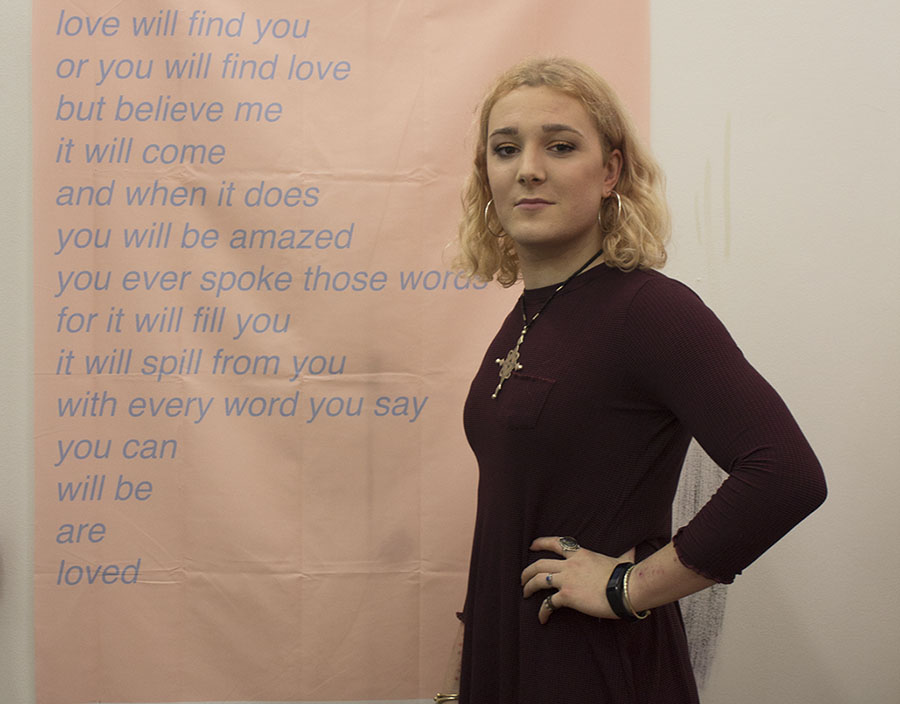 I started looking into the fetishisation of trans people in fine art after investigating our representation in artworks; I realised that unless done by a trans artist the trans individual who is the subject of the piece is often objectified and fetishised; looked at as a spectacle, or obsessed over due to their body not fitting with conventional ideas of what a gendered body should be.

The subject of the dissertation is massively personal to me, as a trans artist I want to know why people like myself are represented in such an objectifying way and I want to find ways to subvert this. I mean, unless represented by a trans artist, 90% of the time or more trans people are portrayed naked. The subject as a whole relates very closely to my own practice, and as such, has informed it greatly already.

Traditional ideas of gender and gender presentation are harmful and limiting in that they negate many ideas within newer gender thinking; the idea that gender is self-identifying, for example. They’re based upon the notion of the gender binary, i.e. there is male and female, and nothing else. However, gender has long been considered to be a spectrum, with individuals identifying across that spectrum in many wonderful ways. To agree with this binary idea is harmful, as it ignores the identities of those who identify as anything other than male or female: gender fluid, genderqueer, agender, and non-binary people.

Similarly gender essentialism states that there is male, there is female, and that both have innate, inherent characteristics that create your gender; effectively stating that gender equals sex, which is again untrue. The harmful and limiting effects of traditional ideas such as these range from people being misgendered, bullied, not being taken seriously (ugh) with regard to their gender, to causing actual, physical danger of harm from transphobic abuse and hate. 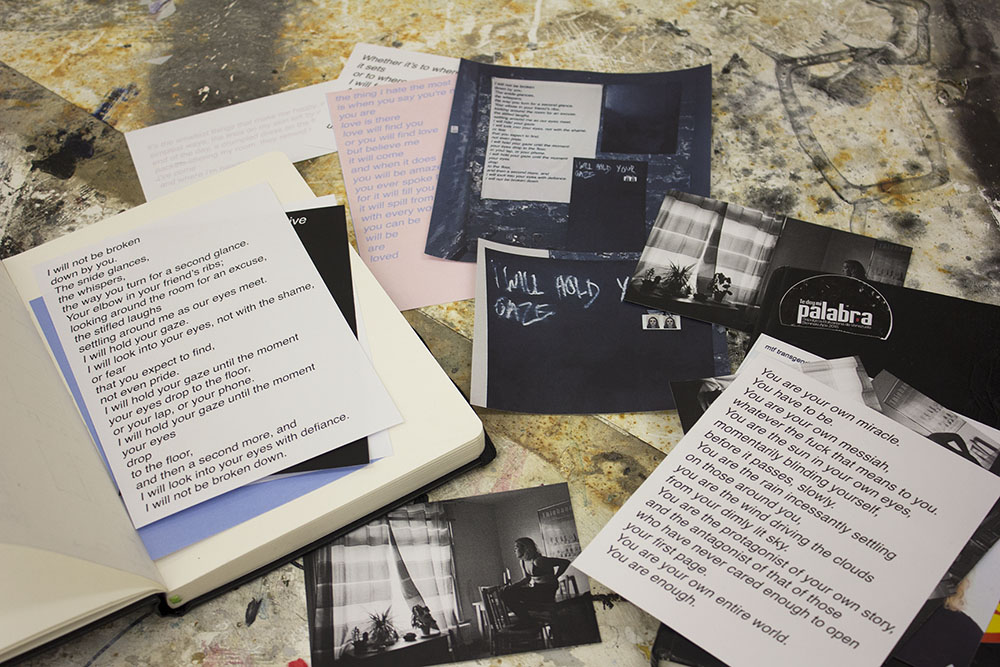 How has it been studying at Camberwell?

Studying at Camberwell has really broadened my mind with regard to my practice. I arrived in first year convinced that I was a portrait painter and nothing else. This quickly revealed itself to be untrue, and by the end of first year I was making abstract, circular landscape paintings. My creative thinking and process has varied so much whilst studying here, partially due to my own uncertainty, but mostly due to the guidance of the tutors and my peers. Tutorials have never failed to be helpful in that even if you’re making the best work you’ve ever made, the experience and knowledge of the tutors will help you approach the work from a different angle and give you a different perspective from which to look. The contextual studies lectures are also massively helpful, as they help you to situate your practice in a greater historical context, and can also give you ideas for new work. One final thing that I’ve found helpful is that the technicians are all practicing artists in their own right, so have a huge wealth of knowledge with which to help you, but they’re also so friendly and accommodating.

In our first year, the majority of the course grouped together to put on an exhibition in a Byzantine church tower in Plaistow, Newham. It was the first exhibition I’d taken part in outside of any curriculum and it was a great experience and taught me quite a lot about curation. I was involved in quite a few exhibitions last year, with one of the highlights being UNIT; a huge exhibition of the year two Fine Art students at CGP Gallery and Dilston Grove in Southwark Park. It was the first time I’d exhibited in a big, commercial gallery, and it was a really valuable experience. In contrast to that I think my favourite moment of the course so far was another external exhibition in the basement of an antiques market in Cardiff, culminating in a gig night with some of the best local bands playing. 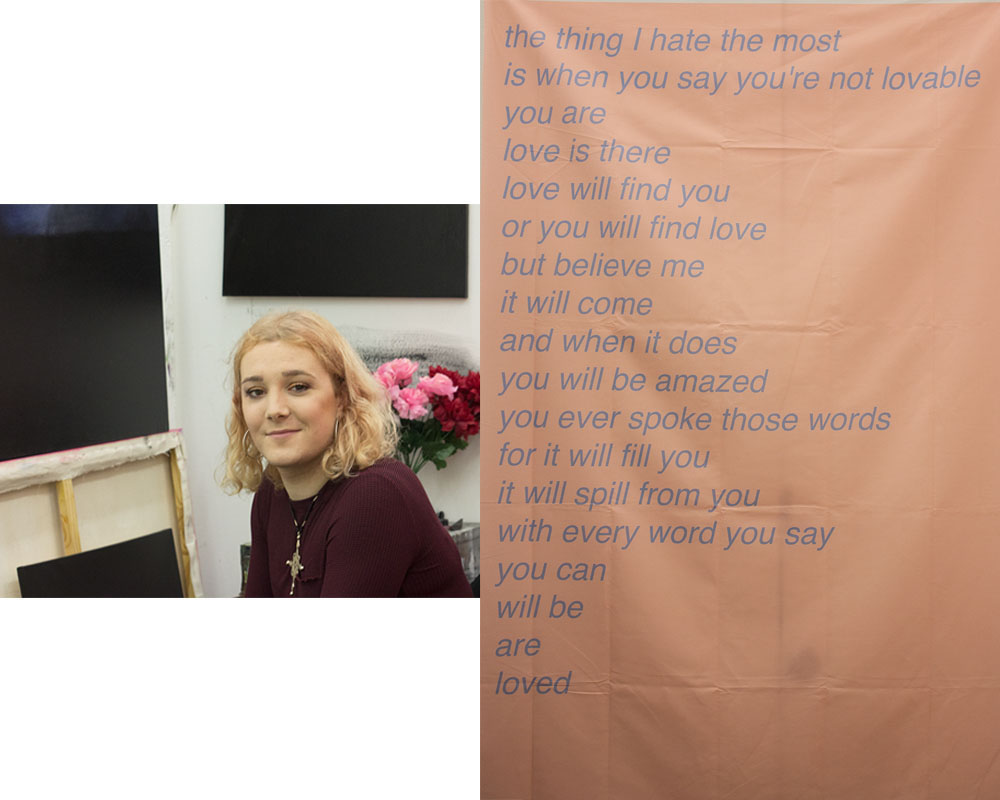 I’m currently working with UAL in planning an exhibition I’ve been working on for a while. It will take place at a gallery space within the university by the end of the academic year. The exhibition is called And The Whole Drum Will Sound, the aim is to provide trans and non-binary students, current and recent graduates, at any level of study, from any of the six colleges a platform which they might not otherwise be given. It’s hard to find a platform on which to tell our story, and start breaking down stereotypes about who we are. There are huge changes I want to see with regard to queer and trans issues and their acceptance, changes which aren’t happening quick enough, so I thought I’d start doing stuff myself.

Part reaction against the incorrect, ignorant, and harmful way we’re often portrayed by the media, part opportunity for us to tell our stories the way we want them to be told, the exhibition will be an exciting, in depth look at life as a trans or non-binary person. Nothing similar of this scale and level of visibility (which is what it’s all about) has been done before at UAL, so it’s very exciting.

Aside from this huge project I have a few others in the planning and early stages, such as a couple of zines, a book, and a couple of other exhibitions in the works. As well as continuing to make work and preparing for the degree show at the end of the year. I’ve genuinely never been so busy, or so terrified of being busy!