Camberwell BA Drawing associate lecturer Jordan McKenzie is premiering a new performance work this weekend. Shame Chorus is an uplifting new music and spoken word piece which takes as its starting point the shame of being gay as experienced by the London Gay Men’s Chorus, who will also perform it for the first time on Saturday 8 October 2016 at the London Irish Centre in Camden, London.

The piece has been produced in collaboration with the Freud Museum in London, psychoanalyst Susie Orbach and the London Gay Men’s Chorus.  The works performed began as anonymised psychoanalytic interview material from the choir about their experiences of being gay and coming out.  Jordan then passed these on to a range of well-known composers including include Billy Bragg, David McAlmont, Conor Mitchell, Sarah Morrison, Steven Smith and Verity Susman, plus many more, to make new positive, therapeutic songs.

Talking about the project, Jordan McKenzie said: I wanted to make something positive and uplifting out of the negative experiences that the LGBTQ community across the country had faced in reaction to coming out. This is the transformative power of art – it helps us to question, make sense of things and communicate – and what better way to overcome shame than through loud and powerful song.

As part of a sneak preview for UAL, also filmed for BBC London, journalist Paul Prentice interviewed Jordan McKenzie about the inspiration for the project:

An artist who has worked nationally and internationally, Jordan McKenzie has presented performances, films, drawings and installations in many major art spaces and galleries. His work is concerned with topics such as performance art, drawing, alter-egos, urban spaces, social engagement, localism, artist run spaces, identity politics, queer theory and practice and minimalism. In the 1990’s his works examined queer politics and body based practices.

This new piece was inspired by Sigmund Freud’s famous ‘talking cure’, a mode of psychoanalytic analysis where a patient talks in order to allow the therapist to uncover hidden, repressed and unconscious desires.  The psychoanalytic interviews on which the work is based were conducted Susie Orbach and Sally Berry who asked, who asked members of the London Gay Men’s Chorus to recall memories of feeling shamed – events that may have in part shaped their feelings about themselves and their sexuality. 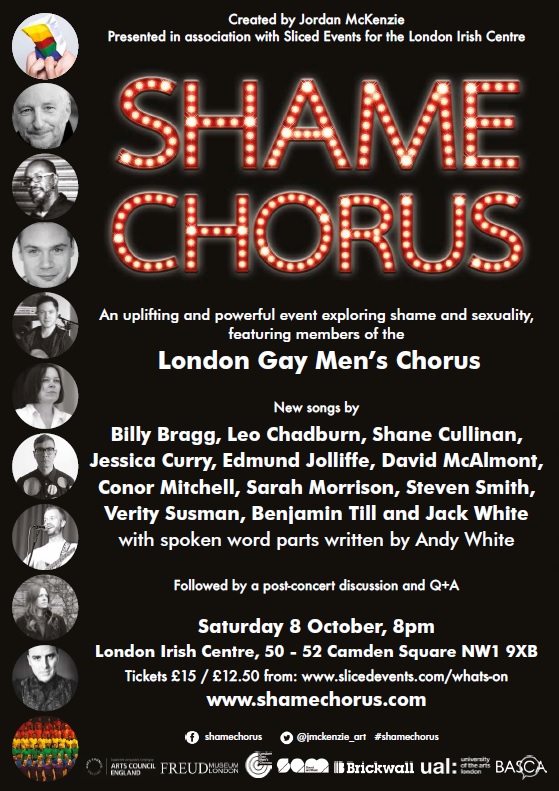 Book tickets for the performance on Saturday 8 October online