IN THE KNOW: BA Photography graduates Giorgia and Marta make a book for the V&A library

Now in its third year, the Camberwell Book Prize was set up by Camberwell College of Arts BA Photography department.

The idea is for graduates to be assisted in reaching a wider and new audience with their work. The winners who are awarded with the Book Prize see their book fully realised with the help of and in collaboration with Camberwell Press. The book is published and then included in the permanent collection of the V&A library.

We sat down with Giorgia Castiglioni and Marta Barina, winners of the Book Prize 2017, to speak about their design which is in the very early stages, and to find out a bit more about them and their work.

The two Italian friends not only decided to work on this award together, but also live and share a studio space with one another. Giorgia and Marta graduated in 2016 from BA Photography have always had an interest in the idea of making a book, but had never gone about making one before.

Although the two friends had worked collaboratively together on projects in Camberwell, and they discuss and share thoughts about their work, they hadn’t worked exclusively on one piece before. The Camberwell Book Prize can be deemed their first official project together.

Their discussions about making ideas real was the starting point for the Camberwell Book Prize, their idea takes the form of a sticker album. They thought and deliberated about collectors, collecting works of art, what it means and how people go about it, which eventually led to the concept of making an album of artworks. However, instead of owning pieces of work, with the sticker album one can collect an array of art in sticker forms. Once the concept was born they started to refine it and decided to work on it together. They went to BA Photography course leader Duncan Wooldridge who supported them and encouraged them to apply for the Camberwell Book Prize. Following their success, they are working with Camberwell Press to plan the book, which they hope will be published in Autumn 2017.

Marta and Giorgia share a particular interest for participatory art and situation-making, which they feel will be reflected in the sticker album, an interactive book that depends on the participation of the user for its complete manifestation. 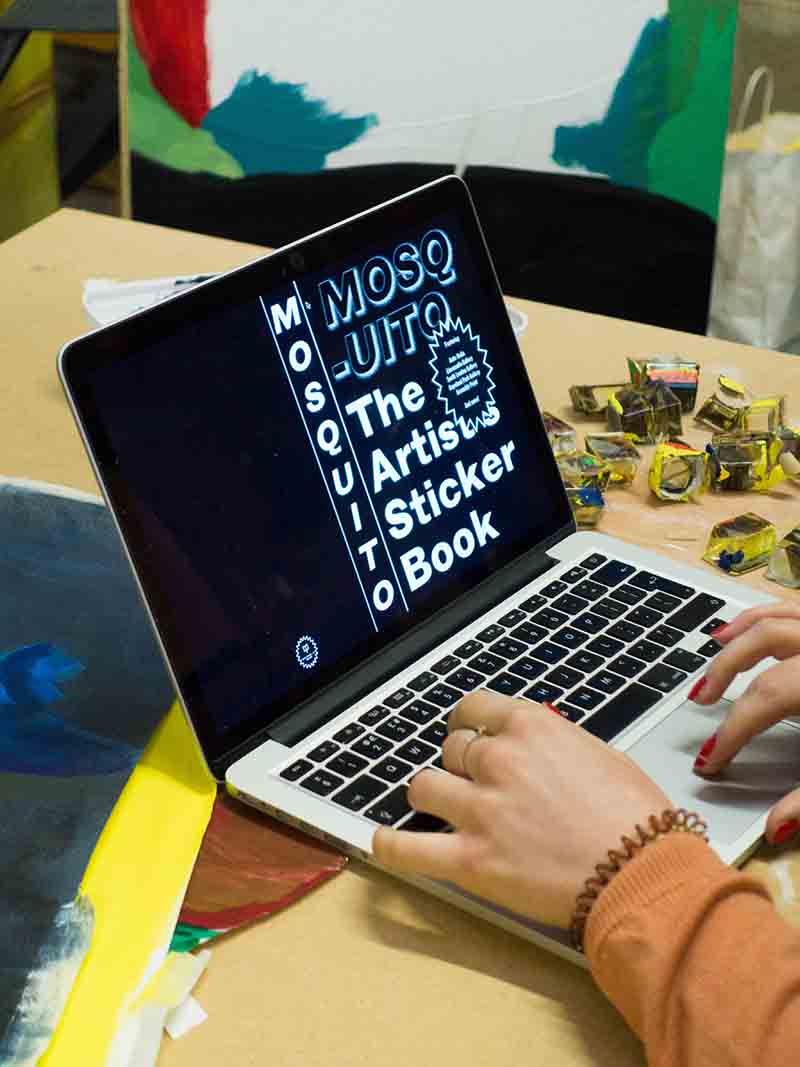 A mock-up for the cover of ‘MOSQUITO’ designed by Eilis Searson, Camberwell Press

Giorgia and Marta’s concept is like an archive and remembers the generation of people who had sticker albums and collected stickers. Collectors can put artists, pieces of work or possibly galleries as stickers into their album. The archive, rather than the atypical digital version of today, will be a physical archive for those who want to collect art or artists across London. At the moment Giorgia and Marta’s concept is to include a variety of spaces across London such as galleries, project spaces and experimental exhibitions. Collectors will be able to travel to these spaces to fill up their sticker albums.

The sticker album is an interesting concept and the further development of the project is definitely one to watch. We look forward to following Giorgia and Marta’s sticker album progress!

Giorgia Castiglioni is Italian, born (1993), and currently based in London. Giorgia graduated from BA Photography in 2016 and she was awarded the Camberwell Technical Achievement Award 2016. She has taken part in a selection of recent exhibitions and projects which include: Milano Studi Festival (Milano, Italy, 2017); Oxymoron (Treviso, Italy, 2017); Lines of Enquiry (Buster Mantis, London 2016); South London stroke Register 20th Anniversary (King’s Hospital, London, 2015); and Close Up (Royal Academy, London, 2015). She also has been part of a publication: All Is Very Very Good (co-published, 2015).

Giorgia’s practice explores aspects of contemporary society focusing on the unnoticed and the ordinary, primarily through video and installation. Often touching on humour she translates slices of the everyday into visual and auditory installations that play between the concepts of the real world and imitation. The result is a distortion of the familiar through amplification and redundancy, that stimulates emotions and thought onto the self and onto the world surrounding us.

Multimedia artist Marta is working at the intersection between sculpture and photography, creating artworks and experiences drawn from her intuitive and in-depth assimilation of contemporary life in dialogue with literature and historical subjects. Marta’s works involve an ever-changing visual language and list of materials, united by a desire to bring the viewer to a certain tipping point from which the grasping of an abstract whole becomes possible.