Camberwell Undergraduate and MA Conservation Summer Show 2018 has just started and we have met with BA Drawing student Daisy Latam who talks here about the inspiration behind her degree piece.

Tell us a little bit about yourself?

I come from a little village called Ditching just outside Brighton. Ditching has two pubs, a church, Morris Men and a tea room called Dolly’s Pantry. I grew up taking part in the village fair where everyone makes crazy scarecrows, dresses up for a big parade and dances at the disco on the village green that night!

How would you describe your practise?

My practise is a wonderland rabbit hole in which I free fall daily. I pursue and flirt with every subjective whim and fancy that passes over me, everyday waking to immerse myself in a fantasy world of haunting obsessions and troubling pleasures…! Just of late my studio has become a strange factory and I myself its own Madam Willy Wonka. But this factory is not one with a chocolate grinder, instead it is the largest and most famous Knobnose making factory in the whole world! It is a tremendous and marvellous place where castrated clay organs are caressed up and into life, lovingly smothered into plaster homes and then, just before ascension, cracked violently from their slumber and reborn again as Silicone Gods.

What is your work for the summer show about?

On the fourth floor of the new building I’ve presented a body of work thats born from my year long relations with the Knobnose, aka my current muse. I’ve indulged my very real and sensual pleasure for this phallic member by courting it in various artistic ways. I’ve made many versions of the same muse: there is Knobnose Firstborn, a skinny, wart covered spinster of a nose with an uncomfortable girlish wiggle; there is Knobnose 2 (The Second Coming) a huge magnificent rhinopasty-growth; then there is The Mesolithic Knobdress which incorporates two knobs, one with sumptuously stroked balls, and one which has been sliced down its shaft, its two new halves turning against each other, caught in a never-ending struggle for freedom but entwined by their shared ballsack. 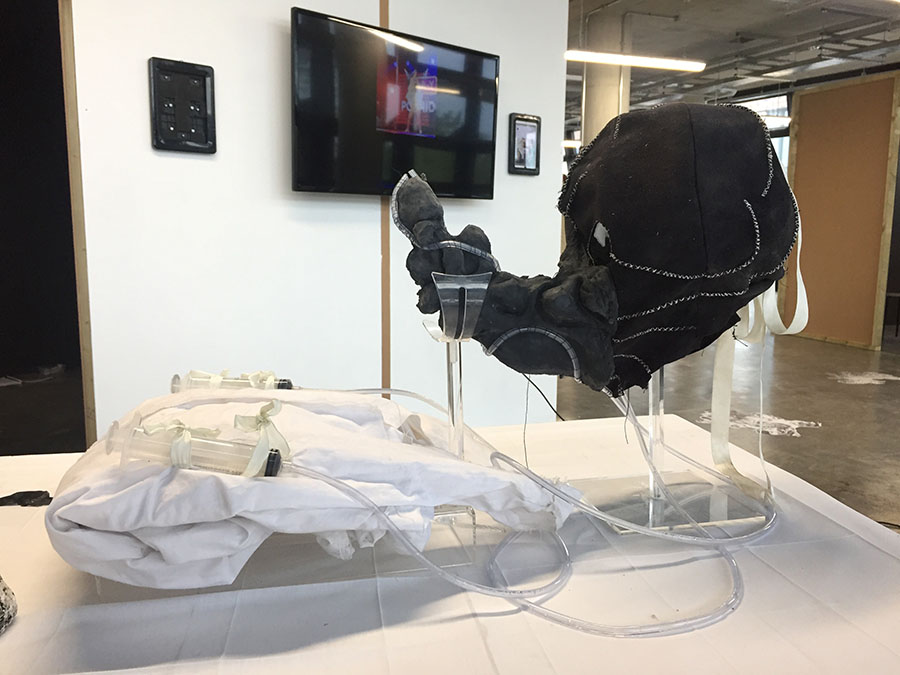 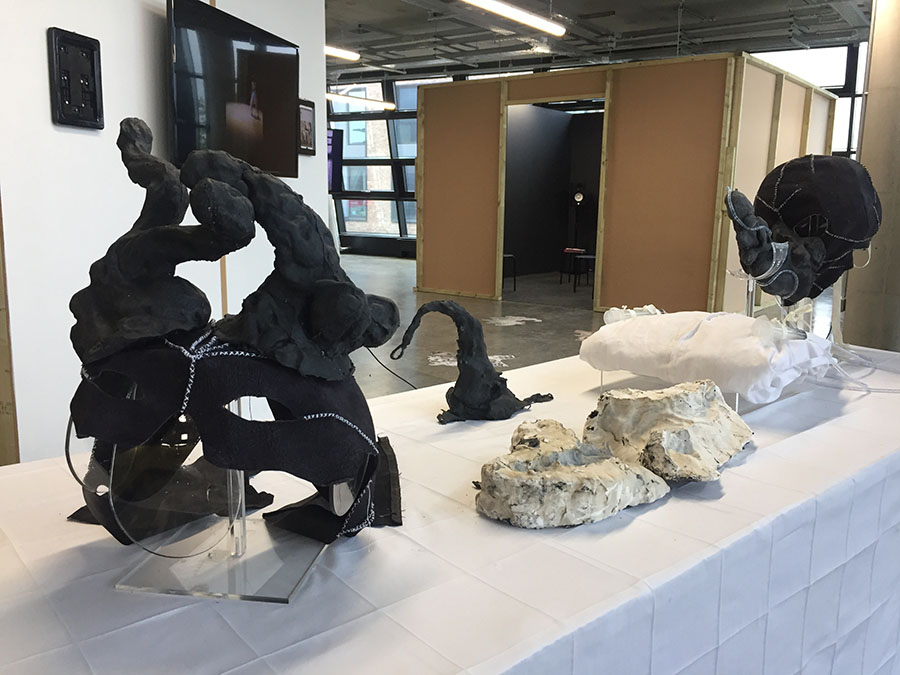 Since Christmas this year I’ve performed with my muses every month. We’ve performed as a mechanical doll, sung Karaoke, tap danced and ballet danced, and competed in a strip competition. For the degree show I’ve presented my Knobnoses on a neatly gridded table cloth with hand-made museum stands, a screen showing two previous Knobnose performances and an iPad showing Knobnose Selfies (an ongoing Instagram series of Knobnose self portraits).

What inspired you to make this piece?

In second year I went on a 4 month Erasmus exchange to Geneva and ended my time there by presenting a one minute comedy art sketch for my peers. I made steel armour sculptures, a Minnie Mouse helmet, pointed breast plate and an extendable bracelet to wear. I also made a fitted bed sheet dress and matching anklets, then, wearing all these items, I jumped for joy on a mini trampoline. With this piece I wanted to tread the precarious line between that which is painfully uncomfortable, the unspeakable, and that of tummy-clenching laughter and surreal incongruity. I looked to channel the essence of Mr Bean I wanted his matter-of-fact approach to the world and absolute dedication to selfhood, if at the expense of all pain and inconvenience.

Naturally my dissertation followed the same subject. I analysed the performance work of Gilbert and George as if it were British popular comedy and, by way of my research, came across The Kipper Kids. The work of Harry Kipper and Harry Kipper I feel was a huge influence on my work this year. This pair performed in pubs, nightclubs and festivals wearing latex noses and scout uniforms, communicated through grunts and sung The Beach Boys California Girls. They formed their artistic collaboration in the early hours at a Frankfurt railway station when they were “on an acid trip” after spending the night “in the flat of a German psychoanalyst”. Reading about this crazy pair who eventually wound up splitting on very bad terms, had little money and rather bad excessive drinking problems shone a light into the fun that could be had outside of the white walled gallery space and all the fun that I could really be having with my so called “art”.

Where else have you performed outside college?

In addition to the Knobnose performances this year I performed at a Chelsea Student Cabaret night on International Women’s Day. I made a humongous costume for my friend, and fellow artist, Josep Barnadas to wear – a white, foam Stay Puft Marshmallow Man costume – and we performed a raucous tap routine. It was very funny because the costume was so large and the stage so high that his head scraped the ceiling and he could barely dance the routine planned. 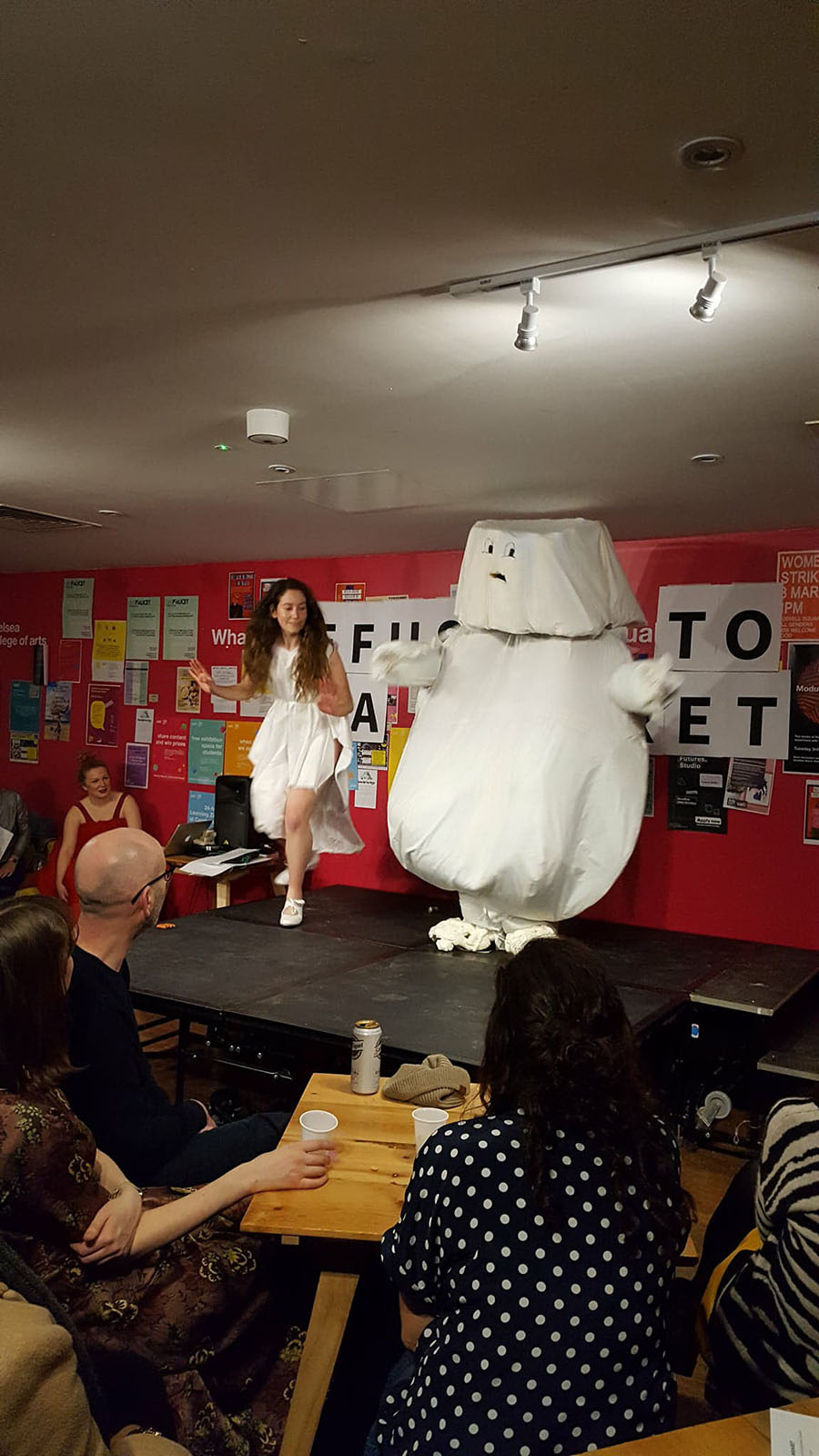 I also did a performance at the ICA, I found an open call on Facebook for ‘gender fluid’ performers and it specifically called for those with phallic objects. I added an ejaculation apparatus to Knobnose 2 (The Second Coming) with the whacky help of artist Jonathon Armistead. This apparatus was two big syringes at my boobs connected to tubing up the length of the Knobnose which allowed me to shoot fluids whilst performing my balletic routine.

My favourite performance was most definitely the strip at Heaven Nightclub. Me and my friend the artist Megan Clay Dennis went to a pub in New Cross Gate – I secretly had the Knobnose and fitted bed sheet dress in my bag – and after a couple of G&Ts we decided it was the right night for the Knobnose to perform at Heaven’s ‘Porn Idol’. I rang the club and the guy on the phone made me promise I would strip, then we jumped in a uber to Covent Garden, I got changed in the back of the cab to my dress, tap shoes and matching underwear set. When we arrived I’d missed the line up so we stood at the front by the stage. Once all the other strippers had danced I shot up my hand to be picked… the woman judge pointed and shouted “YOU!”. I quickly climbed up onto the stage and turned to shout to Megan: “Megan grab the Knobnose!”, then she threw it up to me and I whipped it on and stripped to ‘Don’t You Wish Your Girlfriend Was Hot Like Me’. Halfway through this crazy bloke ran on the stage to try and grab the Knobnose but he slipped on my bra and then was carried off by his hands and legs by three security men!!! It was fantastic!! The Knobnose got down to the final two in the competition, and then I was forced to take off the mask to compete in a Britney lip sync off… without the mask I didn’t have the same sensual performance as with Knobby and it just ended up me tap dancing naked! Hahahahahaahahaah!!! 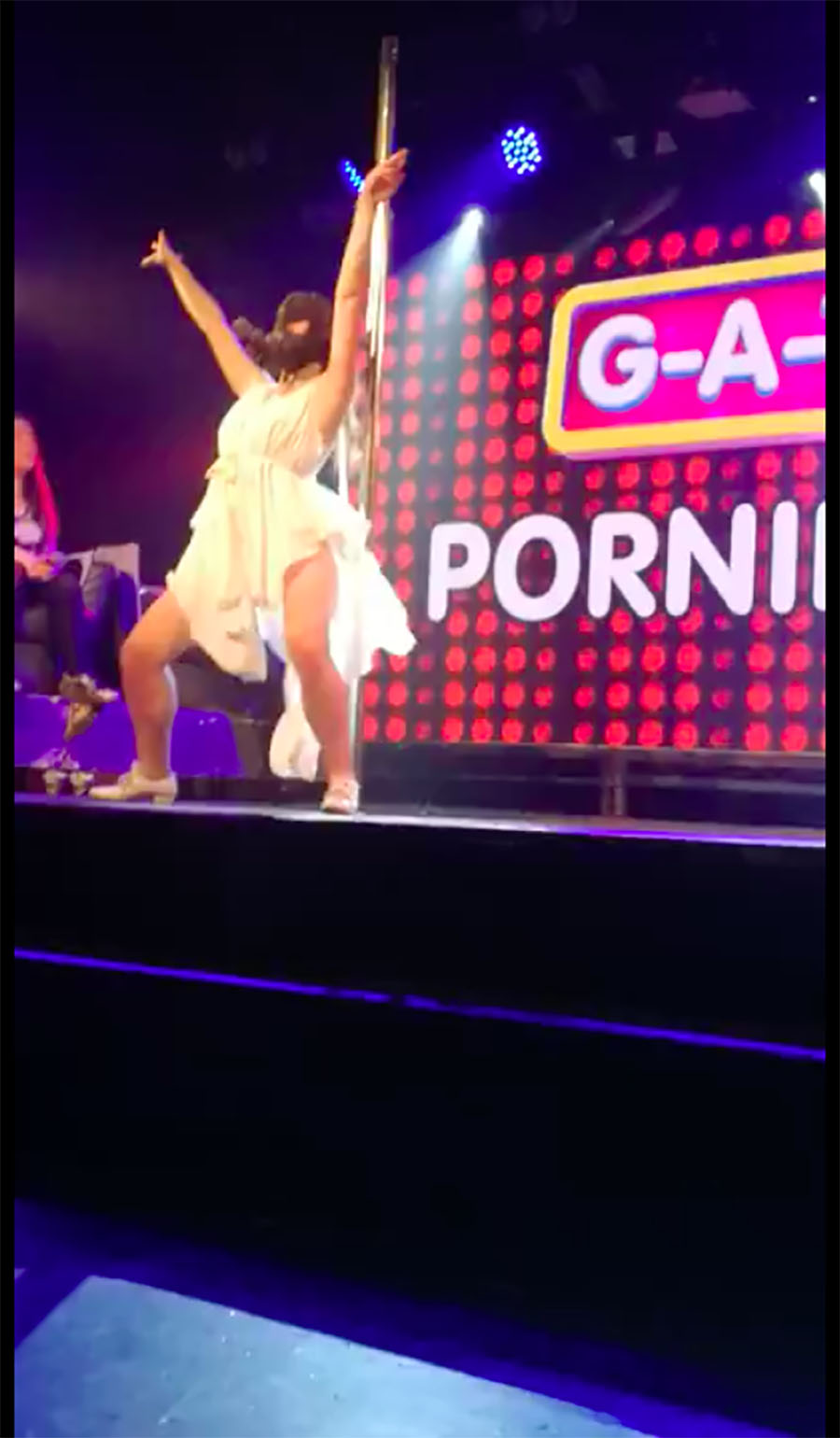 Why did you choose to come to Camberwell?

I started off my UAL journey at Central Saint Martins on the Foundation Diploma in Fashion Design. Whilst there I made billowy breast feeding tops, skeletal repeat print culottes and a collection inspired by the rare disease that is Quantum Trouser Event Affliction. I then progressed onto the BA Womenswear course at London College of Fashion, but it was only after failing every unit at both colleges that I realised perhaps I was in the wrong subject. Mid way through that year I searched all of UAL Fine Art courses for a spare place, whacked out an email to Kelly Chorpening, the leader of BA Drawing (the only course with room to spare) and transferred that very week. It was the best decision and fluke of my uni times!