With Camberwell undergraduate degree show 2018 now finished, we took a last look at some of our students final pieces to understand more about the process and inspiration behind them; here we met BA 3D Design student Kyle Ramsey.

Kyle was born in Hayle, Cornwall and talks with a sense of nostalgia of his memories of growing up ‘in a rather relaxed, and slow part of the country’.  Conversely, he wanted to study somewhere with the opposite feel and moved to London in search of a more dynamic place. Kyle choose to come to Camberwell captivated by the workshop facilities which are open to all students; and the fact that well-known ceramic artists, such as Lucie Rie and Richard Slee had both been taught here. For his degree show Kyle works with ceramics to create pieces which shows influence from living in a metropolitan area, whilst using traditional methods and aesthetics associated to a rural setting.

Tell us about your work for the summer show 2018

The work I made for the summer show was my interpretation of a true memorial/celebration of living in an urban environment as it’s not all quality public transport and high streets. A lot of my work is influenced by the different elements of the urban landscape; busy road junctions and eroded graffiti. I represented this in pots and vases which shared similar forms to old English salt glazed pottery, but I also took inspiration from late 18th century Chinese ceramics, using jade greens, and bronzes which were found on ritual wares. This was to match the ritual most inhabitants have in London of having the same trip through the same busy roundabouts, with what I imagine the same high stress levels.

I created three different collections of vases in relation to what I interpreted city life to be and how (if it should) be celebrated. Junction collection were jade vases inspired by map contours, with cast bronze lids which featured busy junctions found in London, such as Elephant and Castle, and Bank. ‘andles is a set of homeware I made using door handles I found in a bargain box at Deptford Market early one morning. The market was one of the only similarities I could find between the city and the countryside. I’m also featuring a collaboration I did with an artist in Bath called Krack Party, who paints. He sent me some of his pieces of which I then made vases based on chimneys found on the industrial remains of London such as Battersea power station. Close up of Chimney Pot

What materials and procesess did you work with?

As this year was the first time I truly dedicated my studio time to creating ceramics, I experimented a lot with different clay bodies and casting materials, but for the degree piece I used terracotta and earthenware for the clay bodies. Terracotta is what I used for the ‘andles collection, and the Krack Party collaboration as the iron in the clay body interfered with the glaze I used which resulted in a unique mottled brown. Terracotta is also an inexpensive material and is closely associated to traditional pottery. For the lidded pots I used Jesmonite combined with bronze powder and pigments, and also cast bronze which was a process I wanted to do for a long time while I was at Camberwell.

All the vessels are hand-thrown, a traditional method which I fell in love with, and probably the main reason why I decided to focus on ceramics in my final year. The handles I made using slip-casting and press moulding the door knobs I found at the market, which is more of an industrial approach to creating. I wanted to include some sort of CAD work, so the cast bronze lids were created from topographical maps of London, then redesigned as a lid and 3D printed in PLA filament which is a material used for a ‘burnout’ with the lost-wax method, where the mould is put in the kiln and the 3D printed form is completely disintegrated along with the wax. This left a hollow mould for bronze to be poured into. I also used 3D printing for stamps I made for the collaboration, which were impressed into the surface of the chimney vases. 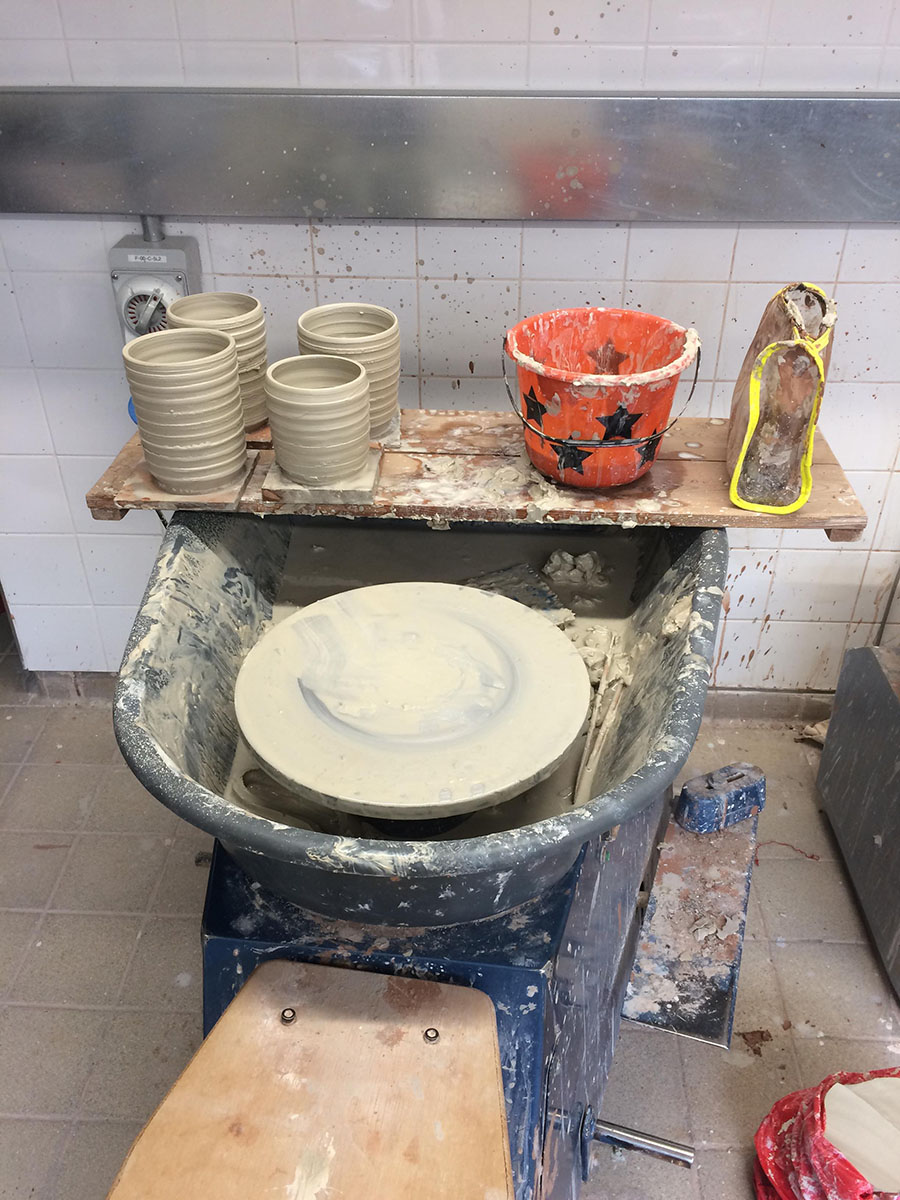 Throwing of the Junction Vases

Closed up of Bank lid on Junction Vase

Have you got any plans for the near future?

I’m not quite ready to leave education, and I’m definitely not ready to open a studio so I’m planning on gaining an apprenticeship in a studio pottery setting, learning traditional English pottery methods such as salt glazing and wood firing. With these new skills I’ll open a studio and continue selling and displaying my work!

All pictures courtesy of Kyle Ramsey.