Gillian Ayres, Camberwell alumna and one of Britain’s most respected painters has died aged 88. Ayres studied at Camberwell between 1946-50 and went on to teach at St Martin’s School of Art (now part of Central Saint Martins, UAL) from 1965 to 1978.

Dean of Fine Art, Sophia Phoca, paying tribute to the trailblazing artist said, “Gillian maintained an active interest in painting at Camberwell College of Arts and worked closely with Programme Leader Dan Sturgis and fine art staff. She was supportive of students right up until the end of her life, recently re-reconnecting with the college in 2016 when she spent considerable time working closely with our final year students.” 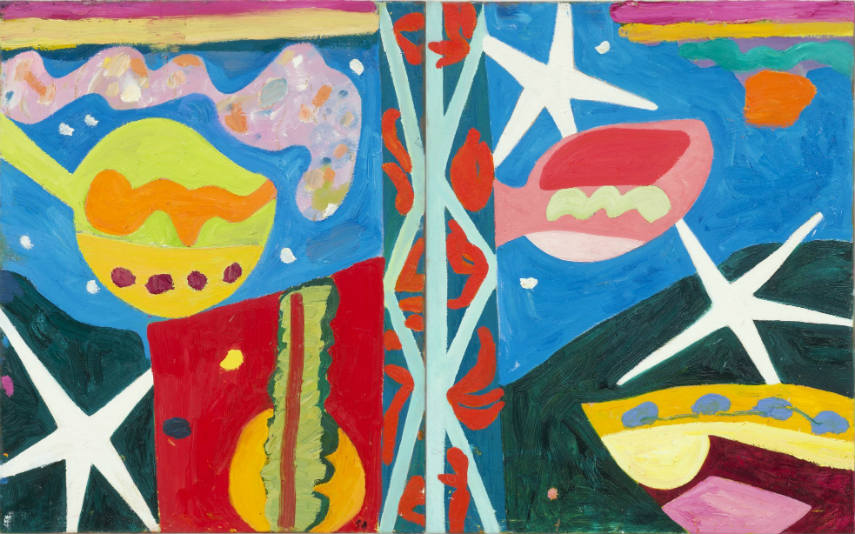 Rebecca Guez, who graduated from BA Fine Art, Painting in 2016, wrote her final dissertation on Gillian Ayres and the artist had written to her.  Two quotes from the letters, that are particular favourites of Rebecca’s and that she has asked to share, include:

“In artist material shops I become rather excited and extremely greedy. I suppose just levering the lid off a tin of paint is a pleasure and pure turps probably smells better than any perfume.”

“I care for and respect younger painters that are painting – it matters tremendously.”

Rebecca herself says that “Gillian Ayres is an inspiration for her unashamed conviction and undoubted pleasure in the sensuality and materiality of painting.”

Gillian Ayres’s early years were spent in Barnes and she received a progressive but sporadic education until she was eleven, when she went to St Paul’s Girls’ School and finally learnt to read. The art critic Mel Gooding, writing in his book about her in 2001, said this had left her with ‘a kind of waywardness, an idiosyncratic individuality’ – most useful to an artist.

It was at St Paul’s that her ambition to become a painter had begun, when she came across a series of books on Van Gogh, Gauguin, Cézanne and Monet. Describing the moment Ayres had said, ‘Funnily enough, one was always pushing for modernism’ – Van Gogh still being a bit radical in 1940s Britain. ‘The four who set me off were really bloody good, they really were. My God! What they could do with painting!’

This exposure to Post-Impressionism was supplemented by cycle rides to the National Gallery where, during the war, one picture a month was displayed. ‘Looking at whatever you ruddy could which was around, that’s all really,’ Ayres said. ‘It was just there. I was always just looking and painting – asking for oil paints at Christmas. I wasn’t attracted to the art world, I was just attracted to painting. It’s whatever ruddy gets you.’

With her friend Shirley Williams – who had then decided to become Britain’s first female Prime Minister – Ayres taught art at weekends to the children of blitzed Stepney. It was during this time that Ayres announced that she was going to study painting.

‘I insisted on going to art school. There was a great fuss about it from my parents, who were perfectly supportive people, just not in the art world.’ The headmistress protested: ‘you know what kind of men you get at art schools.’ But Ayres got her way and arrived at Camberwell in 1946 mixing with the likes of budding jazz trumpeter Humphrey Lyttelton, the painters Terry Frost and Howard Hodgkin ( who both became lifelong friends ) and Henry Mundy, whom she married in 1951.  Many of the men she met at Camberwell were returning to civilian life after spells in the military and would not accept instruction from traditionalists and this was a major influence on her choices as an artist and individual. 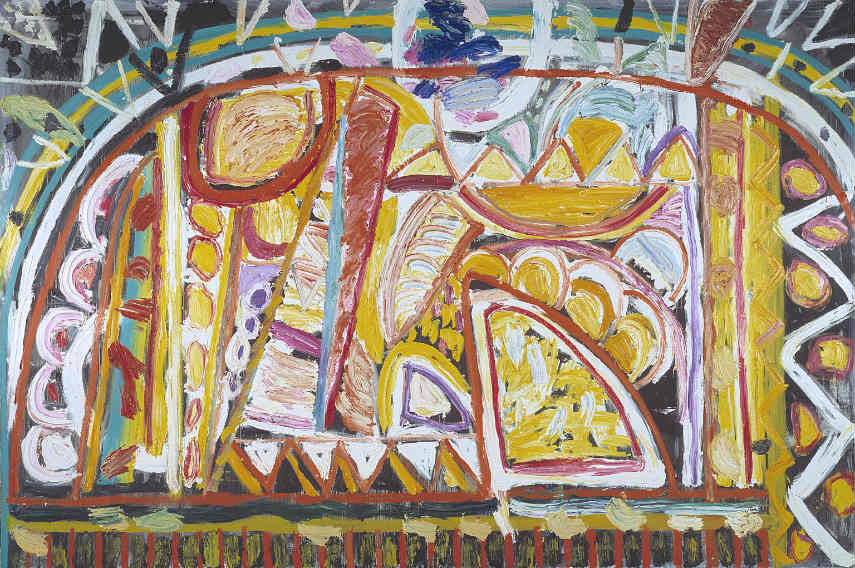 In an interview (Daily Telegraph, 2010) Ayres recalled how she had enjoyed the ambiance of Camberwell.  “Art schools were probably better than the rest of the world. They didn’t really throw anyone out in those days, they wouldn’t do anything to you, so you were allowed to be.”

After  Camberwell, Ayres got a job as a chambermaid in Paris but eventually returned to run a gallery in Soho (with Mundy) and set about becoming a painter, ignoring any ideas that painting was not a suitable career path for a woman.

“I do remember a woman saying if you are female and you want to get on, you’d better teach needlework or graphic design or something. You certainly won’t get a job teaching painting. And I can remember women saying that they wanted to give up their lives for their boyfriend, who was a great artist. I was always very ratty if there was any of that sort of thing.”

By the mid-1950s her talent and individuality had ensured Ayres was one of the most advanced painters in Britain. She was making abstract pictures by pouring and splattering paint on a canvas placed on the floor, like – but not in direct imitation of – Jackson Pollock. In the 1960s she used thin washes of acrylic; her work of the 1970s was densely encrusted like some rich textile and in the 1980s and 90s she used skeins and whorls of thick oil paint like coloured rope or muscle.

Although perhaps not quite as well-known to the general public as her Camberwell contemporary Howard Hodgkin, Ayres was highly respected in the art world. She had enjoyed the accolade of a solo Royal Academy exhibition and fourteen of her pictures remain in the Tate Collection.  The broadcaster Andrew Marr speaking about Ayres in 2010 described her as ‘probably the finest abstract painter alive in Britain’.