I’m Andrew Graves-Johnston, I’m a mature student just finishing my BA Sculpture course. I have seen a vast change in the world just in my lifetime; the web and widespread, easily accessible tech was only fiction in my youth.  My interests lie in memory, how it is documented and archived and how it is perceived by society, what is kept and what is lost.

The piece I presented for my final show is a reworking of amateur, Super 8, found footage from the mid 1960’s. When I first viewed the footage, I knew it had cultural value and knew instinctively that I wanted to work with it. The films are a historical document of the lives and times of that era. I have converted the footage to digital for ease of editing and presentation but it still retains the original qualities and feel of analogue film.

The footage was transferred by filming the projected images with a Canon DSLR and edited with Adobe Premiere. The whole project took around 5 months to come to fruition with many showings and many many refinements. With the editing I have translated the visual language of the 1960’s into one that resonates more with today’s viewing habits.

The setting of the final projection piece for my degree show was important. I used rear projection with a soundtrack of an 8mm projector so to the viewer the technology is ambiguous, it could be digital or an old style projector. The piece reminds us that our memory is not only shaped by visual content, but also by the technologies we use to store, circulate or forget things. 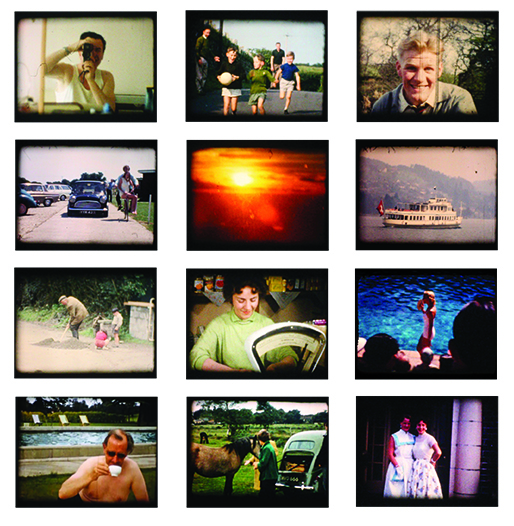 My advice to others looking to do similar project is to keep at it, allow yourself plenty of doing and thinking time and try out as many permutations of ideas that you have. Get as many critics and tutorials as you can, listen to others and if you’re not enjoying it you’re not doing it right!