New Contemporaries is the leading organisation supporting emergent art practice from UK art schools. This year’s selected artists will take part in an annual, nationally touring exhibition which will be launched at the BALTIC Centre for Contemporary Art, Gateshead and BALTIC’s project space at BALTIC 39, Newcastle upon Tyne before traveling to Block 336, London.

We asked Max, Thomas, Declan and Katarzyna about the work that was selected and their current practice.

“Being selected for New Contemporaries 2017 has been very exciting and encouraging, and I’m looking forward to meeting the judges and the other artists, and seeing how the exhibition will turn out.

New Contemporaries have selected five of my drawings from a series titled All The Things A Coward Couldn’t Do, which I exhibited in full at the 2016 Camberwell Undergraduate Degree Show, accompanied with a large temporary wall drawing. Each drawing is made in an improvised way, starting with a reference image, such as a found photograph, anatomical specimen, or video still, which I then embellish, distort or vandalise until I arrive at an unexpected picture.

Since graduating, I was fortunate enough to still be involved with the college by working as an assistant at the Monday life drawing classes, which kept my regular drawing practice going and provided me with a lot of material for future works. I’ve also been working on-and-off as a technical assistant, helping artists install their exhibitions, as well being involved in performance art projects with multi-media artist Brigid McLeer and performance artist Caroline Wright.” 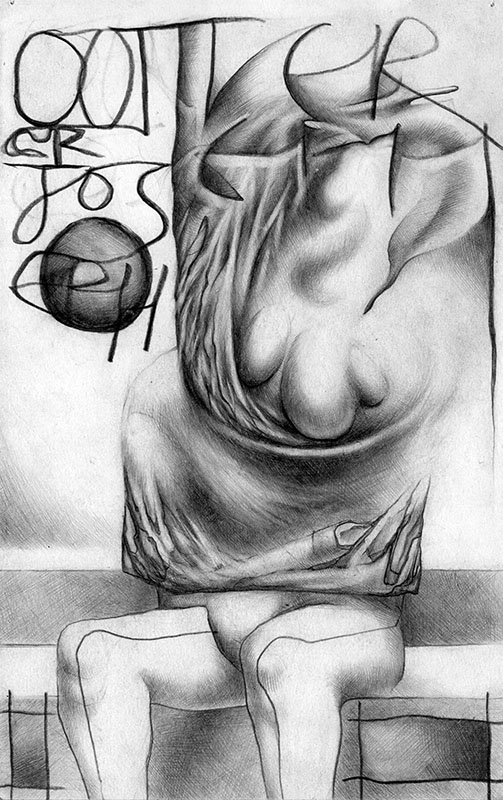 Thomas graduated from Camberwell in 2016 and was selected for New Contemporaries 2016 before finishing his BA Painting course.

“It is a fantastic opportunity to be accepted for Bloomberg New Contemporaries 2017. The selectors have chosen one sculpture named Dir_T. This was the first piece that I made after graduation, a poignant moment for me, making this sculpture in isolation without discussion and support of peers or tutors within Camberwell. The process of this sculpture was also a change out of Camberwell, using material that were unnatural to my practice, it’s production slowed down massively, using Wallpaper paste which can take days to dry (contrasting to previously using packaging material, such as tape).  The core of the sculpture is a clothing rail, layered with stretch film, then with sandpaper and finally with two pairs of patterned tights.

This year, New Contemporaries shall be travelling to Baltic and Baltic 39 in September, which should be a fantastic exhibition platform, then journeying to Block 336 in London.” 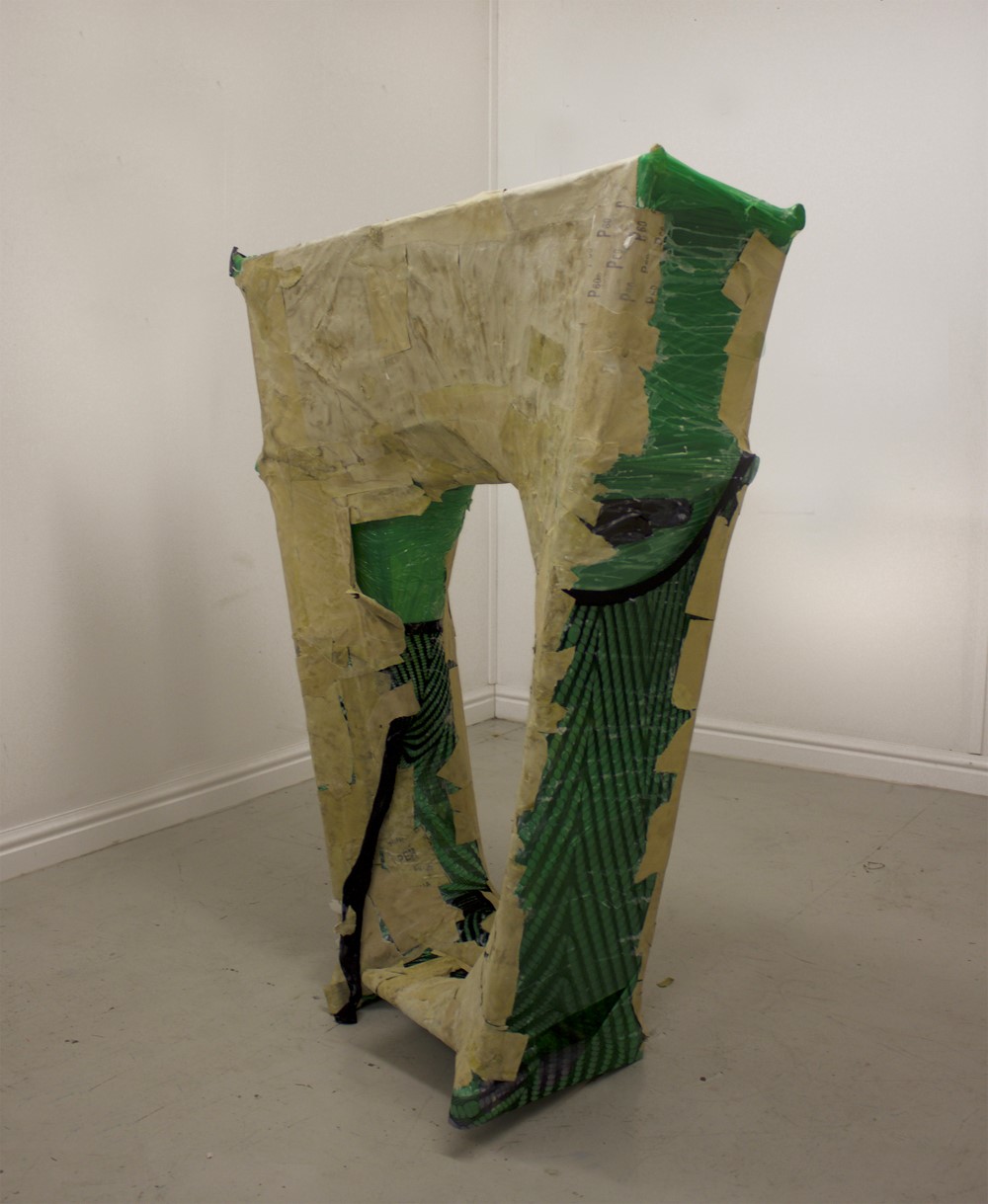 Having moved away from video, Declan’s practice is now concerned with utilizing the specificity and unambiguity of the written and spoken word, and to engage with a language of socio-political efficacy through psychogeographic (mis)representation, recollection and hallucination. The content is influenced by mental health, medication, addiction and an adulation of music. This written component is supported by sound works (although the two are not mutually exclusive) that rely on analogue processes and homemade instruments.

TOTEM is a short video that scrutinises the atomisation of society occurring through the proliferation of mobile phones, which is at conflict with their supposed purpose – instantaneous interconnectivity. This subject of “alone, yet together” is handled through a written paean to a telecommunications mast, and underlines it’s structural similarity to a totem pole. 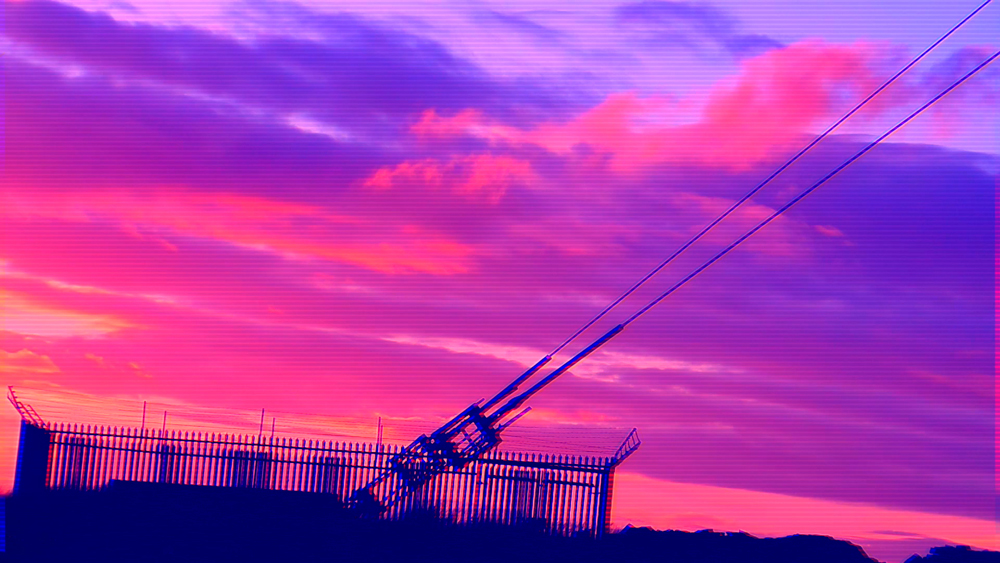 Katarzyna’s practice is socially focused. In particular she engages with intersectional narratives concerning women, migrant and queer histories. She is investigating the relationships between queer notions of utopia, hope and the concept of the ‘wish landscape’. Autobiographical experiences often form the starting point, which she then expands into inter-subjective dialogues, tapping into ideas of collective memory, shared vulnerabilities and desires. Currently she is exploring the potentiality of affect as a tool for registering and archiving current and past historical moments. Collecting is another strategy that Katarzyna often employs in her work, she is particularly interested in the ways that these methodologies of accumulation can engage viewers emotionally.

Her practice centres around video, photography and performance. She has recently expanded her work to incorporate sound as well as placing more emphasis on sculptural elements and modes of installation.

New Contemporaries 2017 chose Katazryna’s piece Niolam Ja Se Kochaneczke which explores potentialities of queer utopias, while looking at the relationship between history, ‘national values’ and power structures. The recordings were done in a traditional rural setting in East of Poland (Roztocze and Karpaty) with folk singers singing both in Polish and Lemkov (Ukrainian dialect).

“Through the work I revisited Eastern European folk traditions and whilst employing feminist and queer reading I questioned why queer love has never been preserved and celebrated in the folk history. I reclaimed these stories by subverting the narrative of ‘straight’ love songs to represent queer love stories instead. Niolam Ja Se Kochaneczke relocates queerness both historically and geographically. Queerness in Eastern Europe is often perceived as a contemporary phenomenon that arrived from Western Europe, rather than something that always had its presence.

I want to acknowledge its historical place and reclaim histories that were  repressed. As well as this I want to speak of queerness in context of rural communities, as too often it is considered only within the urban setting. I intended to encourage the viewer to consider and experience history as a discourse made out of multiple, overlapping and contesting narratives rather than a single, fixed entity. I questioned what the national values are and are claiming to be, looking at the fragility of national identity, threatened so easily by otherness and queer subjectivity.”

The New Contemporaries national touring exhibition will launch at BALTIC Centre for Contemporary Art, Gateshead and BALTIC’s project space at BALTIC 39, Newcastle upon Tyne from 29 September to 26 November 2017. The exhibition will then travel to Block 336, London, from 27 January to 3 March 2018.