We caught up with Chelsea College of Arts graduate and now 3D Technician Ant Hamlyn, he told us more about his personal practice and how his recent job as a technician at Camberwell has inspired him.

My name is Ant Hamlyn, I was born in 1993 and I’m from a town called Northampton. A town made famous for its rugby team and kinky boots. The football team, unfortunately not so much… I moved to Liverpool in 2012 to do my BA Fine Art degree at Liverpool Hope University. I loved Liverpool and I stayed another year after graduating – If you’ve never been to Liverpool, you’re missing out, it’s amazing. While I was in Liverpool I was lucky enough to win a commission on the night of my graduation from Hope University to develop a project at FACT (Foundation for Art and Creative Technology) – A world renowned new media art gallery in Liverpool City Centre. I worked in house on a residency to develop ‘The Boost Project’ – (A work in which I still actively exhibit today). The Boost Project is a 5 x 5 metre interactive inflatable orb that inflates and deflates due to its live social media popularity. It has its own Facebook and Twitter accounts and when it is liked, followed or hashtagged with #theboostroject it swells enormously, if its ignored it deflates into a lump of unloved plastic. 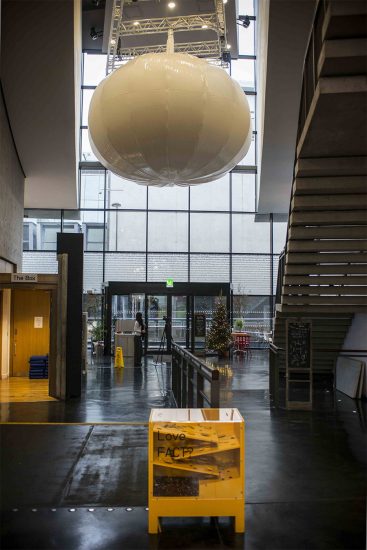 The Boost Project by Ant Hamlyn

This was built for the ‘Follow’ exhibition is December 2015.- I’m mentioning this project because this is where it all began to move very quickly. After this show I completed a six month residency at Manchester School of Art, I was offered a place at Chelsea on the MA Fine Art course and won the prestigious Cecil Lewis Sculpture Scholarship to fund it. 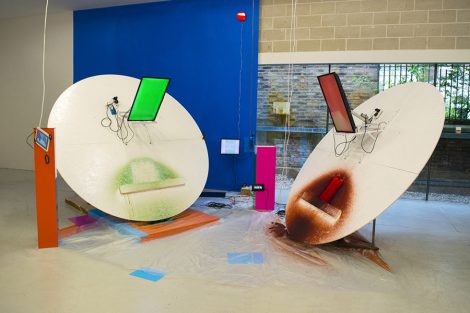 Tell us more about your experience at Chelsea and on the course?

I moved from Liverpool to London two days before starting my course – there’s nothing like being thrown into the deep end. Everything was incredibly different, being back in education again after a year of working with galleries and commissions was at first a difficult adjustment – But I really wanted to do it and I needed it to progress. It was a fast paced, mad experience. I learnt an incredible amount about my work. Where it fits within a contemporary framework and how to hone in on its strengths. Also, and this to me is a stand out point, I learned how to make things really well. Designing, making and tinkering is my thing. My works usually consist of quite a complex blending of sculpture, engineering, colour and technology. So to be able to work alongside and learn from the skilled technical teams was really inspiring. Whilst at Chelsea I also maintained a string of professional exhibitions external to the course, presenting work at the Zabludowicz Collection and the Victoria and Albert Museum. I also represented the UK in an international Biennale in Albania as well as several group shows in London, Derby, Bolton, Greece and Moscow. 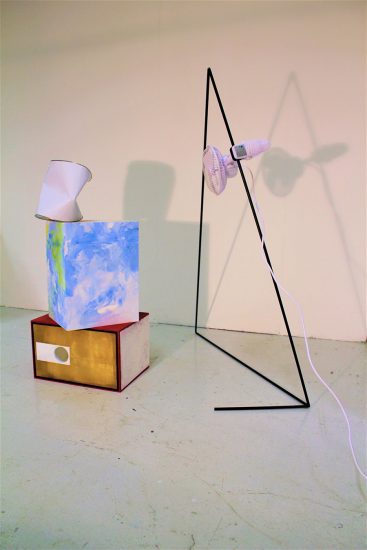 External to working at Camberwell I have just completed the Radical Residency at Unit 1 Gallery | Workshop in Shepherds Bush. I was selected to work in the gallery itself with 8 other artists for the duration of March 2018. The idea being that we would use the gallery as studio space and create works for a group show at the beginning of April. It was an inspiring experience and I got so much out of it. Working intensely on a body of work for one month for a professional exhibition is a very useful and important experience. I’m now about to present a new body of work i have been working on external the residency in a group show at Paradise Works in Manchester, curated by Scaffold Gallery – which i’m very pleased about because I get to exhibit in the Northwest again. Other than this i’m presenting a series of drawings with GAPs curatorial at the FAC art fair in Madrid, and a film at Cyprus Film Festival with Festival Miden in summer. I’m also in the process of designing another large interactive installation which is currently in the prototype stage.

Whilst at Camberwell i’m working as a support technician in the 3D workshops Monday – Wednesday, I’ve been here since October and I love it. You’ll mainly find me in the ground floor wood workshop and plastic room, my role is to equip the students with the skills and expertise required to realise their ambitious ideas. They come to us with an idea, or a sketch and myself and the team work with them to realise it in the most exciting and energetic way possible. Working through budgeting, materials, and construction we advise, support and contribute to the learning and development of working in three dimensions. Being an active practitioner myself external to Camberwell I can contribute accurate knowledge and professional experience to the students I’m working with. One of the main things I’ve learnt and try to enforce is to design and build work that can be made in sections that can be assembled in a space and stored / transported easier. Nothing is more depressing than piles of work thrown away after degree show. 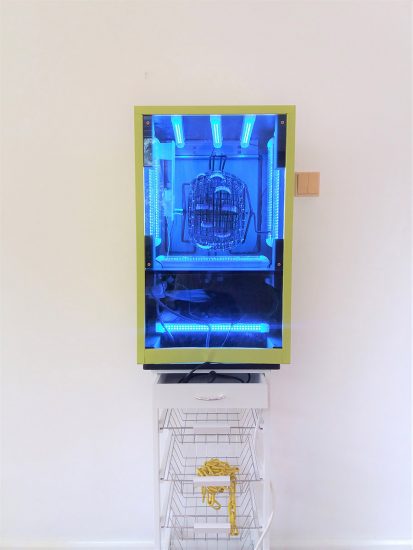 Has working at Camberwell informed or influenced your practice?

Working at Camberwell has definitely influenced my practice immensely. When you are consistently in a practical, making environment. Ideas are always flying around, problem solving on a day to day basis is incredibly influential to any art practice. Influence comes from anywhere, and there is a knowledge that comes from making.

Within my own work, I’ve been recently fascinated with the notion of a fairground under a raincloud. I really like this idea. I’m interested in the raindrop dripping down the coloured light. The idea of being suspended within a moment of everything and nothing at the same time. Between boredom and intrigue, enthusiasm and cynicism. I’m also interested in magic. Magic offers moments of transformation, raw human experience, humour, acceptable naivety and a choreographing of visual and perceptive experience. My works pivot on the intersection between this idea of human experience, stage magic and the performance of technology. Exploring techniques such as sleight of hand, anthropomorphism and elaborate over-engineering – and often played out via the of use of excessive façades. I adjust, expose and reformat the nuances of human experience in society through the exploration of ore, self worth and expectation. I don’t have a specific artist influence, but I admire the work of Olafur Eliasson, early Damien Hirst and Bram Bogart.

If I could recommend an exhibition to see at the moment it would be the Marianna Simnett and the Ericka Beckman. Both at the Zabludowicz Collection until 8th July.