A series of knitted jumpers, damaged by high explosives and then repaired, will go on display this September to raise awareness of the reality of terrorism and war. The project by textile designer and artist Antonia McDonald entitled ‘displaced’ is inspired by the artist’s love of knitting, her former career, and a desire to respond meaningfully to global political change.

McDonald who graduates from MA Textile Design at Chelsea College of Arts, UAL, this September, worked for 12 years as a forensic scientist before becoming an artist, and brought her knowledge from her previous career to bear on this project.

In order to develop the artwork, McDonald worked with explosives researchers from Cranfield University at the UK Defence Academy to purposely damage knitted garments she had made in ways that maintained their structure while showing the brutal and unique damage caused by explosives. She then carefully repaired some of the damage caused with new threads using techniques which do not erase the marks left by the explosions. The aim of the work is to artistically communicate the broken and fragmented lives of ordinary people caught up in power struggles over which they have little control, but who nonetheless bear the most profound scars.

While she worked on this project, McDonald ran textile workshops with a group of clients from the Lewisham Refugee and Migrant Network (LRMN) which provided inspiration for the repair work that features in the final piece. She eventually aims to continue with her socially engaged practice to help create a positive future for those who have experienced violent conflict.

She said: “In my previous work I was often struck by the ordinariness of many of the items I was handling – a familiar brand label in a shredded and stained coat or perfume escaping from clothing unsealed for forensic sampling. These items evoked the everyday lives of those affected, the tiny decisions that had made up their day.

“I want to use this explosive effect, not just as a literal depiction of the damage caused by weapons, but also as a metaphor for the damage to individuals, communities and societies – and also of the power wielded by those who have the access to use them. 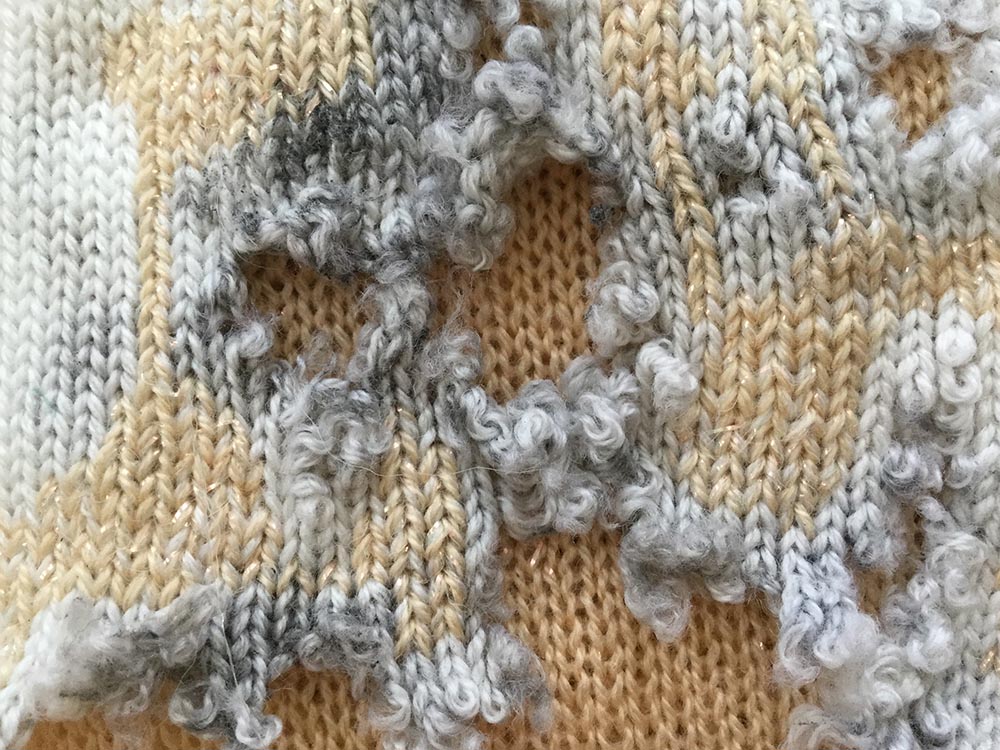 “I can’t think of a more poignant symbol for peaceful communities than a piece of knitted cloth. A single thread worked into multiple stitches to produce a warm, comforting fabric – often imbued with the love it was made with, and yet such an ordinary object. Exploiting the juxtaposition between the intimacy people have with their textiles and the brutal reality of the damage of terrorism and war, I hope to create a piece that has the power to bring home to a relatively safe audience, the impact of explosive weapons on ordinary people and communities.”

You can see Antonia McDonald’s work at the Chelsea College of Arts MA Summer Show from 8 -14 September 2017.