MA Fine Art students Georgina Nicolaou and James Pimperton were this year awarded £8,500 each to pay for their MA fees, funded by the Zsuzi Roboz Turst through the Chelsea Arts Club.

The first awards of their kind from the Roboz Trust, they were set up in the name of renowned portrait painter and ‘lively Bohemian character’ Zsuzi Roboz to support two home or EU MA Fine Art students with a special interest in painting, especially as numbers of students progressing into postgraduate study nationally are falling.

We interviewed recipient James Pimperton about his work and the impact he hopes that postgraduate study will have on his practice.

Tell us about what and where you studied before arriving at Chelsea?

“I studied fine art at Falmouth University graduating in 2007. Since then I have developed and maintained a studio practice, predominantly showing with Campden Gallery, Gloucestershire and George & Jorgen, London.  I have also shown in several group shows around the country. Though I have made some of my earnings through selling artwork, I have also done several jobs, including teaching, working as an artists’ assistant and as a paper merchant. The skills and interests gained on my BA lead to the knowledge and ability I needed to perform these jobs.” 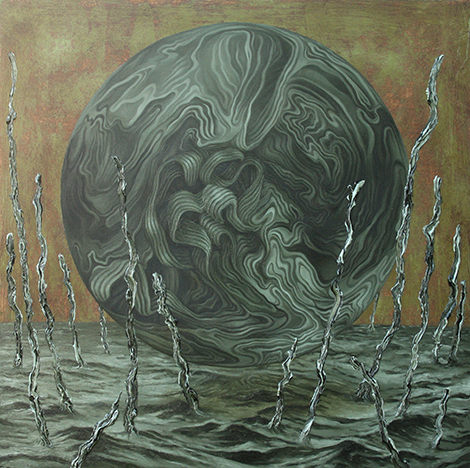 Can you tell us about your practice?

“My recent work stems from an interest in the history of painting. I am questioning what, in the current panoply of media and ideologies, painting has to say about the way we perceive the world.

Painting, in particular 20th century painting, was a series of differing ideologies, each asserting a space or discrete perspective that seemed new or visionary and that was believed to be somehow truer than the others. Inevitably each movement lost its momentum. Through repetition each lost what was supposed to be its primary voice and was left making versions or portraits of itself. This allowed other movements to respond and assert their own ideology. At such moments of obsolescence questions were asked about the relevance of painting at all; a recurring death of painting. We now find ourselves in a period of plurality, where many forms of painting may coexist. A pattern however does emerge; one that could be said to link all of the movements and ideologies into something resembling a logic or nature of painting, and this is painting’s apparent need for a recurrent cycle of birth, death and rebirth. Perhaps painting isn’t a single perspective, ideology or method, but perhaps what it is – by its very nature and what keeps it relevant – is that it is a state of flux; a self-questioning and self-deprecating flow of contradictions.

My work is attempting to visualise this, not by picking past visual ideologies and forcing them into a dialogue (as was the case with several nostalgic strands of postmodernism), but by actively trying to make a paintings that galvanise this overall logic or character of painting into an artwork.

I hope to discover what painting – as a media based primarily on notions of tactility and facture – can meaningfully contribute to an age increasingly defined by non-physical digital media.” 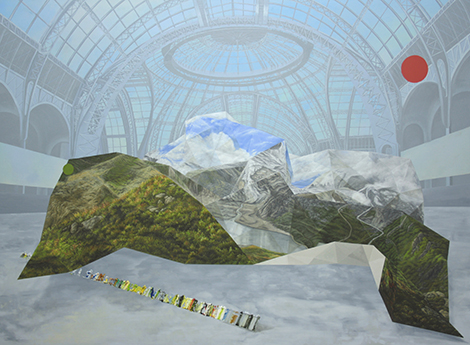 Tell us about how you became to be involved with the Roboz Trust awards and Chelsea Arts Club.

“Having saved for several years to be able to ‘buy myself the time’ to do an MA I started my course without any scholarship, however during the first week of the course the inaugural Roboz Scolarship was advertised. I decided that I should apply. I feel honored to have been chosen to receive he award, and am excited to be able dedicate the extra time and material allowance to making the best of my year at Chelsea.”

What has studying at Chelsea been like so far?

“Whilst feeling like a whirlwind of information and experiences it has been a lot of fun. The college already feels like and warm and supportive place of work and play. I feel at home in my studio and am busy making new work that is, I hope, intellectually rigorous and materially playful, either way it is certainly challenging so far.”

Why did you decide to study at Postgraduate level?

“Since Starting my BA I knew I wanted to study at MA level as certainly for Fine Art it seems that postgraduate study is a perfect opportunity to progress your work further, to re-evaluate, and to refresh. The big question was ‘When?’ In 2007 I had a certain amount of momentum and many ideas still to work through in images. For me an MA at the time would have been a waste because I wasn’t ready to change and develop the work. After 7 years making, and evolving work outside of an institution I had definitely felt that momentum had waned.  Although my enthusiasm for the subject was as keen as ever, I felt I needed a new set of influences, the friendship and dialogue of a new cohort of contemporaries and opportunity to expose my practice to the critical resistance of tutors and other artists.”

In what ways do you hope you and your work will develop as a result of postgraduate study?

“I hope that the sense of re-evaluation and critical playfulness engendered by the ethos of the course will support me to take new risks with my work enabling it to become vital and enriching again.” What do you hope to do following your course here?

“I hope to balance my practice as an artist; making and exhibiting work, with further research and also with other passion, teaching. Therefore I will be looking and applying for part-time university lecturing posts, with the opportunity to study for a PhD.”

Find out more about the Chelsea Arts Club Trust on their website.

Find out more about studying MA Fine Art at Chelsea on our course page.

Find out more about research at the Camberwell, Chelsea and Wimbledon Graduate School on our research pages.