In 2015, MA Fine Art graduate student Tezz Kamoen was selected to take part in the prestigious Red Mansion Art Prize, which was established in 2002 to promote artistic exchange between China and the UK. Each year, one student winner is selected from each of seven of the UK’s foremost art colleges: Chelsea College of Art, Royal Academy Schools, Royal College of Art, Central Saint Martins, Slade School of Fine Art, Goldsmiths, and The Ruskin School of Art, and receives a month long residency in China, followed by an exhibition of their work made in response to the trip.

This year, the Red Mansion Art Prize exhibition took place at the Chelsea Cookhouse and Triangle Space from 16 – 22 March. Here, Kamoen recalls the charm of rural China and explains more about her experience of taking part in artist residencies.

It was my first time in China. It was amazing, I really enjoyed it. We were based in Feijiacun Village, situated north of Beijing. At first everybody on the residency wanted to be downtown in the city centre, but after a while I felt so comfortable in the village. I think it’s because you had this community of people and everybody was really friendly – that really stood out for me. It was easy to make friends and meet people. When you walked around in the village, they all recognised you and you recognised them. It was just like living in a neighbourhood and it allowed me to make connections and friendships with people I would never otherwise have come across because, if I was a tourist, I wouldn’t have known about the village and I would never have known to go there. So I was really immersing myself in a part of local life in China, which was great.

There was also a community of artists there which I didn’t expect and which was a welcome surprise. Aside from the Red Art Mansion awardees, there were other people who were doing the same residency so there was a wide mix of artists and it was great to meet them. Because everyone was there as a result of a funding opportunity, it meant that everyone was professional and motivated to really make something of the residency. 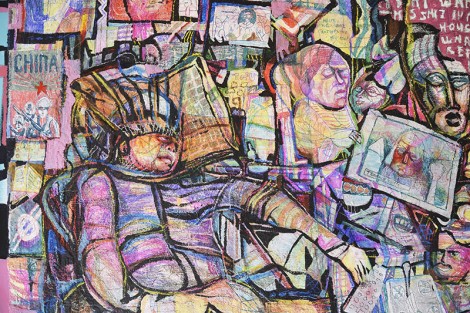 Before I went out there I had ideas about what I might do, but these changed when I was there – I didn’t know anything about it yet, and everything was a big surprise. You just got on with life there, going to places and seeing what happens. At least, that was my approach, I cannot speak for everyone else who took part.

While I was there I spent a lot of time experimenting. I felt really free to do whatever I wanted to. I made a video – something I had wanted to do before but had never had the time or space to.

The residency is very short, only one month, so sometimes I felt like I was in a race with my own thoughts! I found that you must develop you ideas all the time – that was really stimulating. 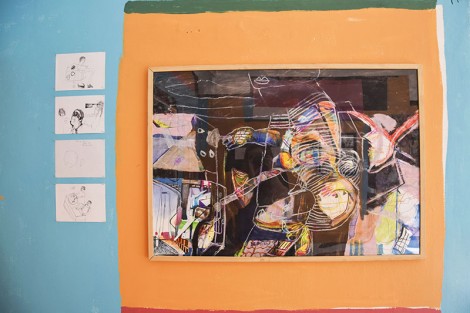 While on the residency, I started to become obsessed about how the locals in the village have to share their space. The rooms where I would have lunch – people would also sleep there, as well as use it as their living room. Everything was so tiny! There was no privacy, or at least the sense of privacy was different from what I’m used to.

In contrast, I had this huge and amazing studio space and, to begin with, I felt awkward about it. After spending time in the village, I would come home to this big studio apartment and I found myself making it cosy and smaller. One Chinese girl who was working for the residency explained to me: “we don’t have gardens – they don’t exist because there’s no space.”

Then, in complete contrast, I thought about this Dutch TV show that I really enjoy where they document a lot of cases of neighbours fighting over little, silly things like disputes over land boundaries, where one might say: “this is the boundary of my land, and your tree is on it so you have to cut it down”. I felt like there was a good contrast between this really silly TV show and what I was experiencing in China. So I started transcribing episodes from the show and using them as subtitles for the video I was making.

From that moment on, when I identified the tension between these two things, I continued working on the theme of space and sharing and the work in this exhibition is the outcome of that. The themes and ideas started there and developed during and after the residency. 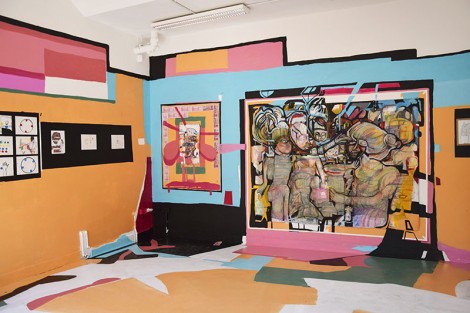 Apart from the themes I mention above, the actual visual things you see in the exhibition – the paintings and the drawings – are all a narrative of memories and situations that happened during my time in China. The idea behind this installation was to combine everything and to play with the idea of a start and an end of a piece of work. By painting the walls and the floors of the exhibition space, and incorporating them into the work, I aim to raise the question: where is the demarcating line? The work doesn’t have a specific start or end point.

I painted on carpets and mats to reflect the struggle I was having with living rooms for that month in China, as well as this Dutch TV show that I was obsessed about. I wanted to take something really personal, like a rug or mat, which is full of family fights and cat hairs and stuff, and use that as the base for the work itself. I felt that was an honest way to express what I was talking about. Also, a carpet or mat is something you look down on, which brings up ideas of value and worth.

I really wanted to avoid the idea of having a show in a gallery, a white cube. That was the most important part to me: to play around with the space, and not make the viewer feel like they’re just looking at the image itself in a specific delineated frame. All the works are part of each other. It’s not one thing, it’s all together. 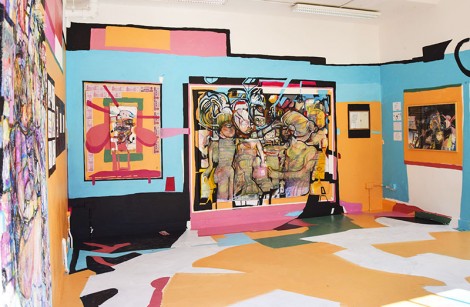 I would advice future students that they just have to do everything you can. I did a lot of building networks when I was a student, and I think this is really important, as it helped me progress to the next things after graduation. It is possible to filter stuff -you’re not going to participate in things you don’t feel like – but if you’re not afraid of that, then go wherever you can to develop and explore. And obviously: make work! That’s the most important. And be full of energy!

Following this show, I’m now going to work in my studio. Because I have been so busy recently doing residencies and working towards projects and deadlines, I feel that now it’s time to do some studio practice for me to develop further. 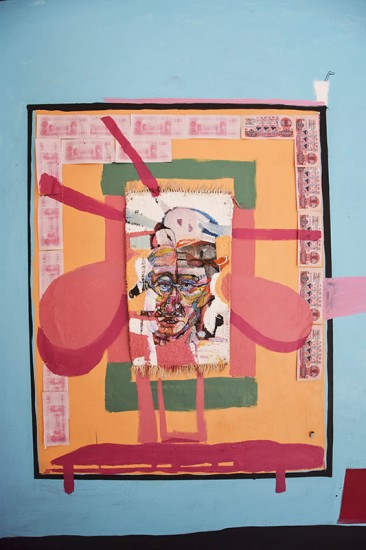 Find out more about Tezz Kamoen’s work on her website.

Find out more about the Red Mansion Art Prize.