In our ‘One Year On’ series we catch up with graduates from the Class of 2014 to find out what they have been up to since graduating from Chelsea.

We spoke to Sarah Roberts, who studied BA Fine Art at Chelsea about her work and practice since graduation.

It has been one year since you graduated- what have you been up to?

I am working for the amazing Argentinian artist Amalia Pica as her assistant. I’m also on residency at ACAVA studios in Cremer Street, Hoxton as part of the LIFEBOAT scheme run by UAL and ACAVA. I had a few shows last year and then focused on developing some work and research, but now I have a couple of shows coming up, I am trying to keep the balance right. I also just took a three week research trip to America, which was great.

Despite the fact that I’ve graduated once before (BA Sociology) and re-entered the world so to speak, graduating was momentarily a bit daunting, I was worried that sustaining my practice without the support and structure of an institution would be hard. But i’m doing ok, I treat the studio as a job, I get there early, set myself goals and I’ve been pretty productive.

I think thats the key: you have to give your work the value of being ‘work’ even if it doesn’t pay your rent. 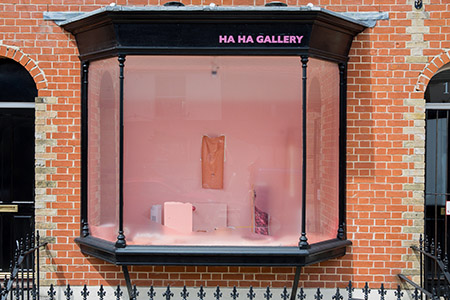 How has your  practice developed since graduating?

I think my practice is continually developing, and hopefully will keep doing so. I’m lucky to have excellent studio mates to talk to, friends with common and related interests, and as part of my residency I get regular mentoring sessions from the amazing artist, curator and mentor Ceri Hand and some sessions from artists, critics, curators etc. that are invited in to do crits with us in the studio. I think that discourse, the raising of questions and the sense that you are involved in a wider context is so important.

I go to a lot of shows, and I try and travel to at least one place every month that I don’t go to everyday. These places so far have ranged from Bonneville Salt Flats to Shoeburyness. For me, the work will only develop if my field of vision and experience does. 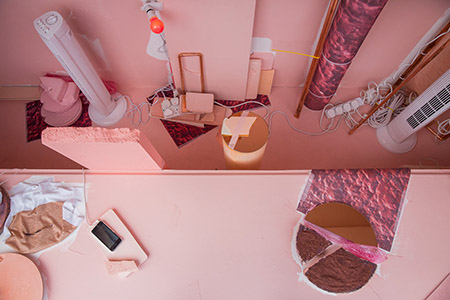 Have you taken part in any projects/collaborations/exhibitions over the past year?

Yes, I was really lucky that immediately after graduating I was straight into prep for a few shows, I was in the Assembly show, Saatchi New Sensations and the Parasol Unit Exposure 14  show between September and November, so I spent the summer making and effectively stockpiling masses of plasters, prints and other matter.

I’ve been having a bit of a break from showing since then so I could  focus on making work. But come Saturday 13 June I’ll be showing a piece called ‘STRIBYN MOEL_NUDE STRIP [HaHa] 2015  the first example of a nude series I’ve been working on since November.  This will be shown at HaHa Gallery as part of a group show called ‘I’m So Excited’.

I think ex-Chelsea Queens Liv Fontaine and Jen Harris, who run and curate the gallery, are doing a sterling pro job and I’d really like to be working with more artist run spaces like this outside, yet connected to, the London bubble. I am a big fan of spaces like East Street Arts in Leeds, and Cactus and Royal Standard in Liverpool.

Next month I’ll be showing a new piece ‘AMPERSANDS [Fairbourne a& Margate a&]  2015 at The Whitechapel as part of the group show London Open 2015, that opens 15 July and runs to 6 September. 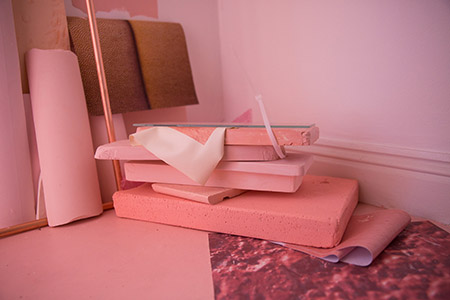 In terms of collaborating, I’ve been working with the fabulous @P4tlunch  at www.eastlondonprintmakers.co.uk and Steph Sommet @theceramicists to push my practice materially, this is more a skills steal than a collaboration! They are both super patient, highly skilled, generous and great to work with.

And last but by no means least I am REALLY looking forward to working with the fabulously talented photographer Jenna Foxton on an exciting new project starting this summer.

How did you find the Summer Show experience last year? Do you have any advice for our third years currently preparing themselves?

I think it was a great experience and that some really exciting work happened in it and as a result of it. On a personal level, the way I install has the potential to be really stressful – I never really know if a piece will work until it is in and it has a lot of logistics. But once I have a shell created  and everything is delivered I get a bit zen and start unwrapping what I call my final phase of making work.

Mocking up for site specific pieces is pretty tricky so there was definitely a risk , but in that sense it was better, and the only approach was to have fun doing it.  The gin gimlets that the fabulous Roger Miles (on Twitter as @jogroglog) kept in supply really helped!  It should be fun. For me, the install is effectively making work and that should be a natural process.

I thought the wider environment was great, everyone was really supportive and there was no sense of ‘best in show’,  which could easily have happened with so many people in the same tense boat, working to a deadline.

I think we were really lucky as a year group – everyone seemed to pull together and really supported each other. There was a real mutual respect and support and that seems to be continuing now after the degree. 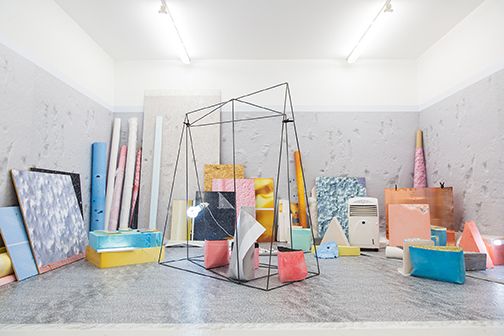 The private view was great, I got a chance to talk to a lot of really interesting people, and I was really pleased to see people interacting with my work – although I remember I was in a bit of a daze after hearing that Jon Baker, Aaron Wells and I were doing the Parasol Unit Exposure 14.

I also really enjoyed the conversations I had with people after the private view. I invigilated pretty much everyday because my work needed care-taking for health and safety, but it was great. I had some really fascinating chats with people about my work and other peoples.

Is there any advice you’d like to give to our current or prospective BA Fine Art students?

Don’t worry about the forms, they take care of themselves. Focus on the work and the forms are a breeze. And don’t ‘not risk it’ – even when its the degree show.  Also, the degree show is a great show you’ve been invited to do, with a space tailored for your work and skilled people and equipment on hand to help you make things – focus on this rather than assessment.

Make the most of those fabulous workshops and technicians. If you think you failed your dissertation – you didn’t. If you sink down a hole at some point it is always recoverable – I scrambled out of the pit!  Just keep making and it will work itself through.

The world after graduation is not just temp jobs and polyester suits, there ARE art jobs and residencies out there and achievable. It is ok on the other side – sign up for studio waiting lists NOW for non profit studios ACNE, SPACE, ACAVA, CELL etc. When you graduate this site is great for finding shows and residencies: http://blog.re-title.com/opportunities.