As part of our One Year On series, we spoke with BA Graphic Design Communication graduate Lily Biswell. Since graduating in 2015 Lily Biswell has continued to focus on moving image and has gone on to work for Sky TV, as well as continue her own freelance practice.

Since graduating I started freelance work on both design and film based projects.

I then started working full time at Sky TV as a multimedia design executive, where I design and make creative campaigns for Sky’s entertainment social media channels.

Outside of work I have also taken on film projects, most recently finishing a music video for Polly Money.

Tell us about your practice, how has it developed since graduating?

I’ve tried to refine my practice since graduating and focus on what I really love to do – which is film. I’m lucky that my job allows me to experiment and tailor my work to what my strengths and passions are. I’m currently working on more moving-image based projects for Sky, which is informing my outside practice as a filmmaker. Still from Polly Money music video It Would Be Ok

I’m currently editing a second music video for Polly Money which is the second in a series of three to accompany her latest EP release. I’ve also just started writing a short film.

Directing, producing and editing a full-scale music video, on top of a demanding full time job, was I think an achievement in itself, but it was also exciting to see it performing well online and gain recognition from Promo News and TMRW magazine.

I’m excited for my short film to be finished, and to also see where my role takes me at Sky. 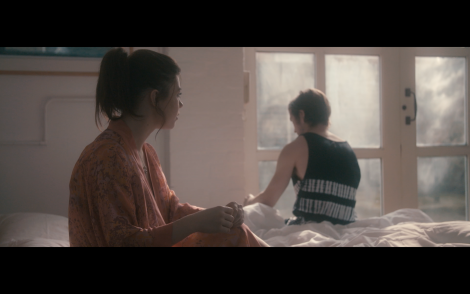 Still from Polly Money music video It Would Be Ok

Tell us about your time at Chelsea, what do you miss?

I miss being around so many different creatives and being inspired by the different projects happening.

You get out what you put in.

Work hard. You don’t get this opportunity again, so make the most of it and do something you know you might not be able to do when you finish. Don’t feel pressure to land the perfect job as soon as you graduate, it takes time.

Find out more about Lily Celeste Biswell’s designs and videos on her website.