As part of our ‘One Year On’ series we caught up with Irina Wang, originally from Florida, USA, who graduated from BA Graphic Design Communication at Chelsea in 2015. In this interview we find out what she has been up to since graduating and what advice she has for our current graduating students.

Upon graduation, I was working as an intern and then freelancer at Pentagram Design. When my student visa expired towards the end of 2015, they were kind enough to sponsor my Tier 2 visa so that I could stay in London and continue working on Domenic Lippa’s team as a full-time designer.

Alongside employment, I continue to design for endangered language revitalisation; I’ve recently returned from the Aleutian Islands, where I was conducting some on-site research with the community of Saint Paul. I’ve also taken on a few freelance gigs and started a publishing collaboration with friends.

At Pentagram, our team works with a pretty wide range of projects and clients so every few weeks can be a new challenge. Recently I’ve been focussing on the London Design Festival 2016 and the inaugural London Design Biennale, both of which will take place in September.

Since returning from Alaska, I’ve set myself a long-term project with one of the few remaining pieces of complex literature in Unangam Tunuu (which has about 85 speakers remaining). I’m working with an elder who has been transliterating it from Cyrillic to the modern orthography, with a view of designing and publishing a new edition that functions as an advanced language learning tool, key religious text, documentation of Aleut history, and a case study for revitalisation. Old Cyrillic version of the “Indication of the Way into the Kingdom of Heaven”, the Unangam Tunuu text I’m working with now, alongside Aleut elder Iliodor Philemonof.

The other substantial thing on my plate right now is designing, editing, and writing for a new publication called Salt , which is essentially a small collective of friends seeking to engage with thoughtful Londoners on matters of faith and life, opening a dialogue which I find is sadly lacking in the big city.

The weekly articles exist online, but 1000 copies are also printed and distributed to the jaded commuters at Waterloo every Friday morning.

Securing my UK visa with this job was probably the most pivotal, and did feel like a massive ‘achievement’ after all the paperwork and uncertainties! It’s also been nice to see Salt launch, write more often, find inspiration in new collaborative relationships, and be trusted with so much creative freedom and responsibility at work.

I graduated from Chelsea with the Dean’s Award and obtained the Mead Fellowship around the same time, which has been an incredibly helpful way to fund the research trip to Alaska and display my Final Major Project at an exhibition in High Holborn earlier this year. I’ll also be speaking on design for endangered language revitalisation at the TEDx University of Bristol event in June. 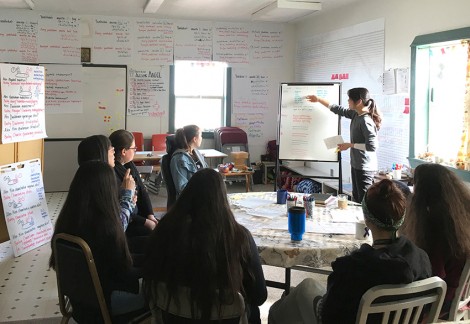 Teaching a crash course on the importance of hierarchy in layout design at the language-learning centre on Saint Paul Island, Alaska.

My opportunities in the UK are restricted due to Visa requirements, so my time in London is likely limited to the next couple of years. A big part of me is still thirsty for the more academic side of schooling, so I’ll probably apply to a few postgraduate courses soon — maybe in design, maybe something else altogether.

I’d like to continue working with endangered languages, exploring the interdisciplinary potential of design, and writing more design criticism. Maybe that would require starting an independent practice, research facility, or publishing house.

Tell us about your time at Chelsea.

In retrospect, our first year with Nigel Bents (First Year Tutor) was such a treat because we were really encouraged to apply design thinking across a huge range of different activities (silly and serious alike), to have fun with it but also gain the fundamental tools and skills to take everything further. Studying abroad in New York for a term in second year was also really eye-opening. 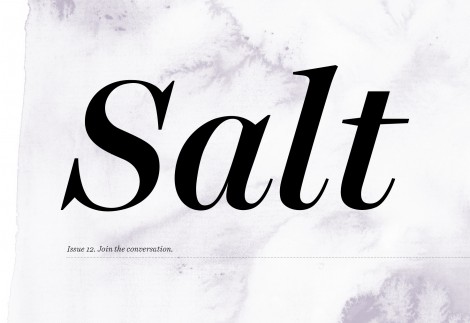 Salt is a weekly publication written to engage Londoners in conversation about faith in contemporary culture.

My course mates were exploring a pretty wide variety of disciplines. We all had really different ‘design personalities’, if you will. If we’d all been doing the same type of work in the same medium with the same message and audience, it would have severely limited my view of the design landscape now. Also, making a point to actively engage in the countless opportunities and creative communities in London was what really enabled me to make the best of the curriculum.

Learn how to take what you do seriously without taking yourself too seriously. That is to say, value your time and purpose without approaching everything with a huge ego and blind ambition. There’s so much to see, try and enjoy, before figuring out exactly what your role is in the world, but until you start choosing to focus on things that you honestly believe will develop your practice and enrich the world (not just your CV or your wallet), you won’t end up feeling pleased with the outcome or matured by the process.

You can see more of Irina’s work on her website