Opening last week at Chelsea Space, the exhibition Ken Cox: Poetry Machines celebrates the life and work of the sculptor of the British concrete poetry movement, Ken Cox. A creator of kinetically powered poetry machines that made words move in space as material objects, Cox’s career was cut tragically short in November 1968 when he was fatally injured in a car accident, just months after his first solo show at the Lisson Gallery. This exhibition is the first time his works have been shown in London since then, and will illustrate some of Cox’s experimental machine works.

Chelsea College of Arts Special Collections librarian Gustavo Grandal Montero has published widely about the movement, and is happy to provide us with a short history: “Concrete Poetry evolved over time. Originally, it was a literary movement heavily influenced by Modernist art, particularly Constructivism and Concrete art, that appeared in Brazil with practitioners such as Noigandres, Ferreira Gullar, Wlademir Dias Pino and Germany/Switzerland via Eugen Gomringer in the mid-1950s. It was characterised by privileging the visual, primarily typographical, arrangement of words over other, more traditional elements of the poem such as sound and meaning. Adopted by visual artists including Wolf Vostell, Dieter Roth, Ian Hamilton Finlay, Dick Higgins, Henri Chopin, Carl Andre and Vito Acconci, and incorporated into contemporary art practice during the early to mid-1960s, it became an international phenomenon through a network of little magazines, self-publishing and a few influential exhibitions, like Between poetry and painting, curated by Jasia Reichardt at the ICA in 1965. 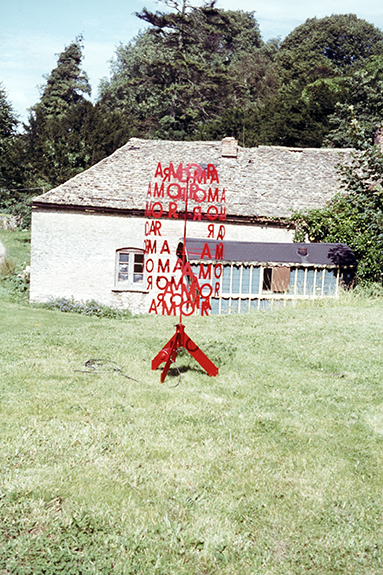 “After decades of being considered a marginal and ephemeral movement, in recent years a new interest in Concrete Poetry has produced a re-evaluation of its substantial artistic achievements and its influence over contemporary art development during the 1960s and beyond, specifically on Fluxus and, crucially, Conceptual art. It’s also very relevant to the current expanding field of art writing, artists’ writing and experimental literature by artists.”

The links between Chelsea College of Arts and concrete poetry are long established, with the Special Collections at Chelsea College of Arts Library acting as a major repository in the UK, particularly for 1960s British and international material from the movement. As Gustavo explains, “Chelsea was an important focus of activity in this area at the time, thanks to the presence of Edward Wright who was Head of Graphics and also the typographer of Openings Press, the small publishing operation set up by Dom Sylvester Houédard (dsh) and John Furnival in 1964. For example, the concrete poetry banners for the Brighton Poetry Festival 67 were made at Chelsea in collaboration between the departments of Graphics and Textiles. We continue to develop the collection and fill gaps in its coverage when we can.”

Indeed, Gustavo’s own research about dsh, Hansjörg Mayer and other luminaries of the movement means that he is personally invested in ensuring the collection is used in both academic and practice-based work. “I am interested in Concrete Poetry as a place where experimental literature and visual arts meet, with language and text becoming the primary material of the artist.” 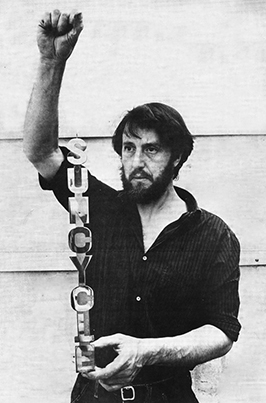 Ken Cox was involved with Concrete Poetry for a relatively short time. He studied at Bristol Art College and later at Camberwell School of Arts and Crafts. A native of Gloucestershire, Cox returned in 1962 to Kingscote and began teaching at the Gloucester College of Art in 1964. During this time Cox became an early member of the GLOucestershire groUP or GLOUP – ‘Glo’ster Gro’up of Concrete and Kinetic Poets’. The members of GLOUP also comprised the artists and poets John Furnival, Dom Sylvester Houédard, Charles Verey and Thomas A Clark. It was from this fertile ground that Cox developed his very particular orientation in concrete poetry.

The Chelsea Space exhibition will see works from many of these events reactivated, including Shadow Box (1965), Cox’s first poetry machine initially shown at the OXPO 2nd International Exhibition of Experimental Poetry, Oxford in 1965. Thrown into the river by Oxford students protesting the farcical nature of the exhibition, the work has been revived and will feature alongside other rarely seen drawings and ephemera. Also included is documentation relating to the 30ft high floating version of The Three Graces (Love, Beauty, Passion) (1967). Made for the Concrete Poetry Exhibition, Brighton Festival, it was destroyed in a storm after being at sea for 10 days.

Speaking of Ken’s work in the context of other artists and concrete poets, Gustavo is able to expand on the themes which were central to the movement: “At the heart of Ken Cox’s work is his concern with exploring the possibilities of letters and words as text materialised into 3D objects, and the relationship between these physical constructions and their surrounding spaces. He was closely associated with dsh and part of a third wave of young artists attempting to re-invent Concrete Poetry and, in the case of Cox, Kinetic art in the mid to late 1960s. His tragic early death stopped this development short, but looking at the photos of his nearly 10 m tall Three graces (1967) at sea in Brighton, for instance, they remind me as much of Robert Smithson as of Ian Hamilton Finlay.”

This exhibition, therefore, will be a unique opportunity to experience the ways in which these works explore the wide range of formal possibilities of the material of language within the spatial and kinetic dimensions of art; where letters do not correspond to semiotic language, but instead show a textual approach to sculpture.