Interview with the Chairs of Black Art and Design at UAL

Last year, thirteen new professors were appointed at University of the Arts London in a major investment intended to enrich students’ academic experience. These new ‘Chairs’ brought leading experts to the University to work across a number of areas of interest within the creative disciplines.

One of these newly created positions was Chair of Black Art and Design, the first position of its kind in a UK art school dedicated to the study of work by black and minority ethnic artists. It is held jointly by artist Sonia Boyce and curator Paul Goodwin, who are primarily sited at the CCW (Chelsea, Camberwell and Wimbledon) Graduate School while working across UAL to develop approaches alongside staff, students and practitioners further a-field, that will highlight the various contributions of black artists to contemporary art and design debates and practices. 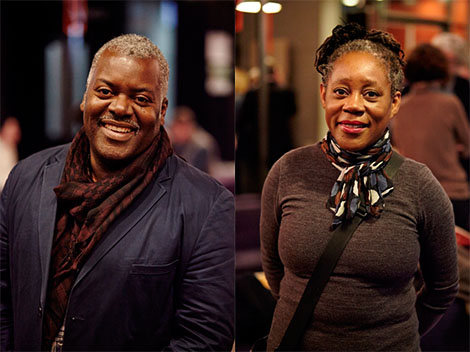 Paul Goodwin and Sonia Boyce at University of the Arts London in 2013.

Sonia came to prominence in the early 1980s as a key figure in the burgeoning black British art-scene of that time, becoming one of the youngest artists of her generation to have her work purchased by the Tate Gallery, with paintings that spoke about racial identity and gender in Britain. Indeed, the work, Missionary Position II from 1985, reproduced at the top of this article, is currently on show in Tate Britain’s BP Walk through British Art exhibition. Since the 1990s Boyce’s practice has taken a more multi-media and improvisational approach by bringing people together to speak or sing about the past and the present.

Paul is an independent curator, urbanist and lecturer based in London. From 2008 until 2012 Paul was Curator of Cross Cultural Programmes and then Curator of Contemporary Art at Tate Britain. In these roles, he curated The Tate Cross Cultural Programme – a pioneering programme of talks, symposia, workshops and live art events that included groundbreaking and internationally renowned events and exhibitions.

Of the creation of the post, Paul said: “This post is a historic opportunity to consolidate and make visible the incredible work and contributions of black and diasporic artists within the context of the art school.  The aim is to inspire all students across the university.”

Having been in position for five months now, we asked Sonia and Paul to answer some questions to give us an insight into their plans for the role as they settle in.

What does it mean to be a University Chair in Black Art and Design?
It is quite thrilling to think that this is the first time such a professorial role has been created in the UK. It’s a great opportunity to shine a light on historic and emerging practices of a wide range of African and Asian diasporic artists and their important but relatively neglected role in shaping art and design in the UK. We want to share this knowledge with the UAL community, irrespective of disciplines.

What do you hope to achieve in this role?
It’s about building on the huge knowledge base around Black Art and Design practices that already exists within and across UAL. The main ambition is for the wider discussions and practices around Black Art and Design to become commonplace within the learning environment. We see our role as facilitators, to bring artists, curators, thinkers and practices into the everyday mix of the cultural life here at UAL.

Starting from this great resource we want to build on the pioneering special collections around Black Art practice in the library collections and develop that resource in a creative manner and to garner knowledge about other collections. Our ambition here is for UAL to be a hub for collecting and developing knowledge around these archival resources. We also want to re-engage the many alumni who have gone on to create a legacy for UAL, facilitate access to and discussion of key art works and involve students at every stage in the process of these projects.

What message would you most like to give to students about Black Art and Design?
We are using the term ‘Black’ to make reference to people of African and Asian diasporas. However, what we want to emphasise is that ‘Black Art’ has and continues to be a set of practices that have intrinsically been part of the broader field of contemporary art. From the outset Black Art has always refered to the international and the diasporic. We believe this global dimension will greatly enhance students development in both studio practice and theory.

Can you give us an idea of some of the projects you are working on and how students will be involved?
We have begun a programme of inviting leading artists and curators to engage directly with students and the teaching programmes. This will be extended to include a more public programme by devising an ambitious series of creative projects working with artists, designers, curators and researchers. Some of the projects we are currently developing in which students will be invited to participate include: an international curatorial collaboration around performance and the politics of carnival, a series of displays and discussions around art, culture and technology, and opportunities for international student residencies and placements. Indeed, work has already began on several of these exciting projects. Earlier this term, students on the BA Fine Art course at Chelsea College of Arts were treated to a tour and in conversation event with artist Ellen Gallagher at her exhibition at Hauser & Wirth. Ellen, who enjoyed a retrospective at Tate Britain in 2013, later came to continue that conversation with students in their studios at Chelsea, looking at their work and offering advice. This is something that Sonia and Paul hope to repeat across other colleges during their time as Chairs. “We’re looking for opportuntiies for students to have that intimate engagement with artists, thinkers, writers and curators” explains Sonia.

The student experience is fundamental to the work that Sonia and Paul have planned. Aware that academic achievement and progression of black and minority ethnic students at UAL has so far followed a disturbing national trend and does not equate with that of their white colleagues, they aim to provide academic leadership in this area, working towards redressing this current imbalance through practice, implementing real change that would impact on all students and boost their opportunities for success. 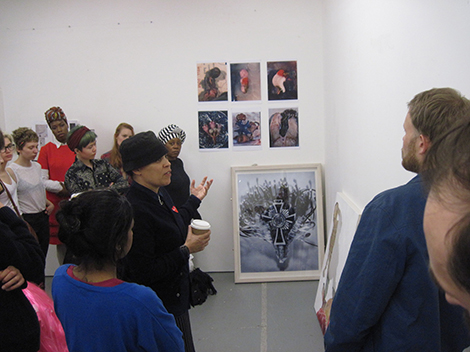 George Blacklock, Dean of Chelsea College of Arts, explained: “With Chelsea’s alumni including such eminent black and minority ethnic artists and designers such as Chris Ofili, Frank Bowling, Trevor Robinson, Steve McQueen, Anish Kapoor, Haroon Mirza and Marika Mori it is my feeling that the College is in an excellent position to support this new post, and believe we are now able to both improve the visibility of, and significantly re-evaluate the fantastic work of black and minority ethnic artists and designers and its place in the national canon. This will, in turn create a more representative body of work for new students to measure themselves by, as they develop their studies at UAL.

It is our hope that the work of the Professors of Black Art and Design will initiate informed change at all levels of the University. This post will work with other University initiatives such as Shades of Noir to continue to combat the disparity in achievement that we see in our students from a grass-roots perspective.” No Woman, No Cry 1998 by Chris Ofili. Image courtesy of Tate.

Even before next term starts, it will be full steam ahead with more exciting collaborations and projects. Artist and curator of performance Claire Tancons is working with 23 students on the cross-dimensional (XD) pathway of CSM’s BA Fine Art course on her project Up Hill Down Hall which will take place at Tate Modern on 23 August this year, during the summer break. The project will bring Carnival into the the Turbine Hall, turning the costumed parade into a contemporary art procession. Following this event, the students will develop their own event for January 2015, celebrating the 50th anniversary of carnival in London.

Then in October Chelsea will host an exhibition of film curator June Givanni’s Pan-African Cinema Archive in its Triangle and Cook House exhibition spaces. Running concurrently with the Fireze Art Fair, this show will aim to speak to the international art audiences that visit London in the autumn as well as students and academic staff. A collaboration with Birkbeck University, Sonia and Paul will also work with students on the newly validated MA Curating and Collections course to develop the exhibition.

These projects are just the start of the ambitious programme of work that the new Chairs hope will have a big impact on current and future students. As Sonia said when she took up the post: “I think Paul and I will make a good team: concentrating not only on an exciting legacy of practice, but curious about emerging practices and debates. I believe we all have some exciting work ahead of us.”

Find out more about the new Chairs at University of the Arts London on our news blog.

Find out more about studying at Chelsea on our course pages.