Chelsea at the Venice Biennale 2017

Taking place every two years, the Venice Biennale is one of the highlights of the international art world calendar. This year’s exhibition, entitled VIVA ARTE VIVA and curated by Christine Macel, opened in May. It features the work of Chelsea alumni including Phyllida Barlow and James Richards as well as an exciting initiative, The Diaspora Pavilion, Venice 2017, co-founded by David Bailey, Nicola Green, Peter Clayton and David Lammy, and curated by David Bailey and Jessica Taylor.

This initiative from the International Curators Forum (ICF) in partnership with UAL has been conceived as a challenge to the prevalence of national pavilions within the structure of an international biennale. Curated by Visiting Professor to Chelsea David A Bailey and Jessica Taylor, The Diaspora Pavilion brings together nineteen artists whose practices in many ways expand, complicate and even destabilise diaspora as term, whilst highlighting the continued relevance that diaspora as a lived reality holds today. These include Kimathi Donkor, who last year completed his PhD at the Camberwell, Chelsea and Wimbledon Graduate School. 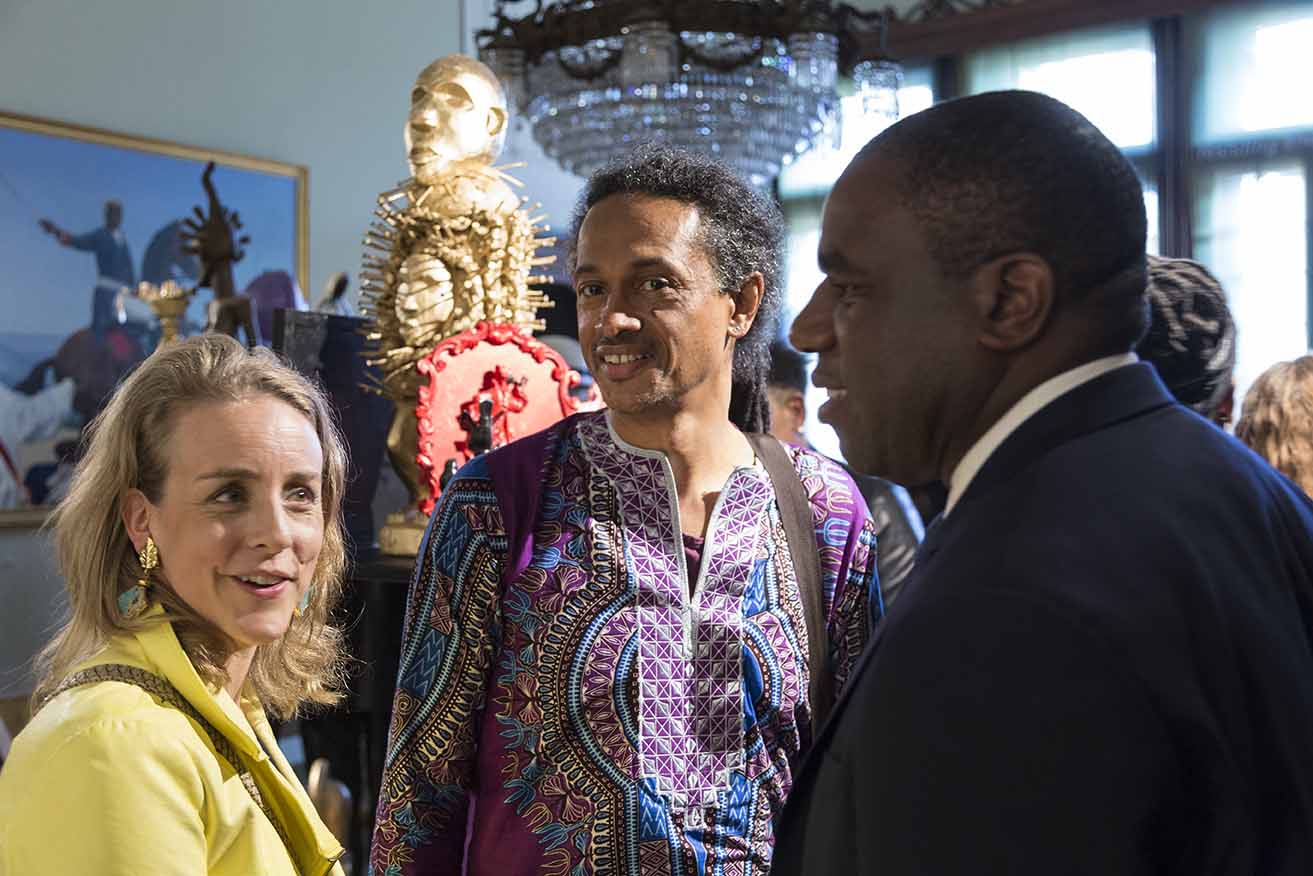 Kimathi Donkor (centre) with artist Nicola Green (left) and David Lammy, MP for Tottenham in London (right) at the Diaspora Pavillion in Venice in May 2017. Image above: Venice Biennale 2017 Image of Palazzo courtesy of the International Curators Forum

The pavilion also forms part of the 22-month, joint ICF and UAL project ‘Diaspora Platform’, which is designed to deliver mentoring and professional development by eleven selected mentors for twelve UK-based emerging artists whose work engages with the topic of the diaspora. During the length of the project, these practitioners will take part in group forum, one-on-one mentoring sessions and group masterclasses. The selected participants and eight of the mentors will all showcase their work in the Diaspora Pavilion.

Representing Britain this year is former Chelsea student and staff member Phyllida Barlow. The sculptor, who is famed for her large scale works, has created an ambitious installation for the British Pavilion titled folly. Playfully challenging audiences to explore their own understanding of sculpture, she encourages visitors to take on the role of explorer, picking their way around a sculptural labyrinth of densely-packed works which inhabit the entire Pavilion, reaching up to the roof and even spilling outside.

Also representing their country this year is Chelsea alumnus James Richards, who is exhibiting new work for Wales in Venice Cymru yn Fenis. His presentation, Music for the gift, includes a sound installation, video and photographic works inspired by the space of the Santa Maria Ausiliatrice where it is installed and the artist’s ongoing exploration of the emotive power of appropriated material.

Richards was nominated for the Turner Prize in 2014 at the age of just 31, and has since shown at the ICA in London and been selected for the 2017 Whitney Biennial.

Also in Venice this summer, Chelsea alumna Michal Cole’s crowd-funded fringe exhibition has garnered the attention of the Guardian newspaper, who reported about her installation which features almost 300,000 neckties in a vast artwork which comments on the oppression of women.

The Venice Biennale runs until 26 November 2017. Read more about other UAL artists showing there on the UAL News blog.