Co-commissioned by Chelsea College of Arts with  14-18 NOW, WW1 Centenary Art Commissions and Liverpool Biennial, the project is managed by Pro Vice-Chancellor and Head of Camberwell, Chelsea and Wimbledon Colleges of Arts Chris Wainwright and Business Relationship Manager Elizabeth Cameron who have worked to help translate Rehberger’s artistic work and vision for the ship into a reality on the Thames.

Launched yesterday,  Monday 14 July 2014, the ship will remain in ‘dazzle’ until January 2015. HMS President (1918) is permanently moored in the City of London, between Waterloo Bridge and Blackfriars Bridge. Directly opposite the OXO tower, the ship can be seen from different viewpoints across the city including the bridges and the South Bank.

A sculptor, painter, designer, filmmaker, at times even an architect, Tobias Rehberger takes objects and situations from life and alters them – making commonplace scenes unexpected. Whether he’s designing seating, lighting and wallpaper, or creating a replica of his local neighbourhood bar, Rehberger – who is interested in society’s relationship to mass culture – makes spaces in which people can live and interact. He works with geometry, using lines and shapes, colour and form to create a physical experience for the visitor to explore – turning the observer into a participant.

The ‘dazzle’ technique has been a recurring theme in Tobias Rehberger’s work. In 2009 he was awarded the Golden Lion Award at the 53rd International Venice Biennale for a café he created that was based entirely on the principles of dazzle pattern.

Rehberger was born in 1966 in Esslingen, Germany, and now lives and works in Frankfurt. From 1987 to 1993 he studied under Thomas Bayrle and Martin Kippenberger at Frankfurt’s renowned Städelschule, where he has been Professor of Sculpture since 2001 and, until recently, was also Deputy Rector of the Fine Arts Academy. His work has been exhibited internationally at institutions including Palais de Tokyo, the Walker Art Center, Tate Liverpool, the Venice Biennale and the Manifesta Biennale, and is included in many important international collections.

‘Dazzle camouflage’, also known as ‘dazzle painting’, was used extensively during the First World War as a means of camouflaging a ship, making it difficult for the enemy to target it accurately. One of the last three surviving warships of the Royal Navy built during the First World War, the HMS President (1918) was the first type of “Q” warship built specifically for anti-submarine warfare – she was ‘dazzled’ during the war. 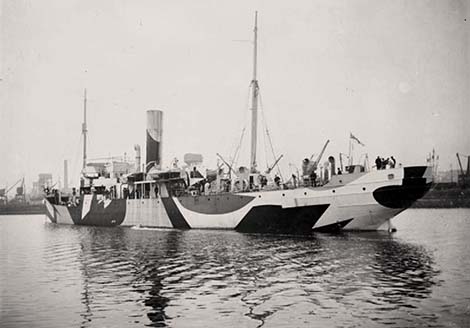 The HMS Saxifrage, one of the original ‘dazzle ships’ used in the First World War.

Dazzle Ship London supported by the National Lottery through Arts Council England and the Heritage Lottery Fund, Bloomberg Philanthropies and the Goethe-Institut London.