Time and Truth: Why is there so much film on the London art scene right now? It is possible right now to spend entire days viewing Art Film in London.  Christian Marclay’s The Clock would take you 24 hours to view (although he begs you not to try), the Turner Prize shortlist this year is almost all film and takes the best part of a day to view,  Strange Days: Memories of the Future, at The Store X, again would take a day to view in its entirety.  There is no shortage of Art Film to see.  But why?  Why is there so much film on the London art scene right now?

What is obvious is that it is easier to film footage and edit it with the tools available today in comparison with a few years ago.  More artists can more easily make Art Film. It stands to reason that production values will therefore have the potential to improve and that the resulting films will be more interesting to view and that the best of what is produced should find itself in our top galleries.  The 21 artists who have contributed to Strange Days have all exhibited at the New Museum in the last ten years.  Possibly what we are seeing is a simple culmination of the last decade’s most upgraded and accessible art medium.

Film as a medium can be, and often is, prescriptive.  If an artist has a socio-political agenda then film allows a point of view to be dogmatically quantified.  We live our lives facing screens – our interface with our world is more and more often via our various personal devices.  The popularity of film at the moment may just be a reflection of our love of “screen time” and artists using our somewhat lazy addiction to grab our attention and fulfil their agendas.

However, screens create a barrier and that makes us feel safe – we can look at horrific things via a screen and sometimes feel nothing at all.  Artist Candice Breitz comments “Why is it that the same audiences that are driven to tears by fictional blockbusters, remain affectless in the face of actual human suffering?”  As artist Pippilotti Rist observes in the Strange Days catalogue, “Today, with computers, TVs, and mobile phones, everything is flat and put behind glass – our feelings, histories, longings.”  There is therefore this bizarre contradiction where film allows a strong social or political comment while allowing us to feel removed from the issue.

There is a sense though of this plethora being more than just accessibility of medium and personal agendas; a sense of a need to grab hold of and save moments in time.  As our history flashes past us, teaching us little, and our future seems too chaotic to grasp, there is a sense of a need to share our stories, attempt connection and beg compassion. Film allows us to “consider the power and fragility of images as the raw material of memory, reverie, and visions of the future”* and records our lives in a way no other medium can.  In our need to connect and find meaning, are we turning to Art Film in a way not seen before?

In reviewing all the films mentioned above looking for themes, two words keep coming to the surface “Time” and “Truth”.

Film requires your time, sometimes a lot of time, looking intensely at an unchanging or repeating image.  Many of these films are about a sense of time. The Clock is the obvious example (pop in for ten minutes and stay for hours, mesmerised by our fascination with how much time we have spent watching, watching time tick by) , but also Tripoli Cancelled.  As Laura Cumming at The Observer comments “Mohaiemen has conjured a universal archetype with this deeply empathetic portrait of a lone figure moored in place but birled** about by time.”  And also the time Luke Willis Thompson insists we spend looking at a portrait, more time I warrant than most of us would give to the Mona Lisa.  Forensic Architecture questions what happens in a very short space of time.  Ragnar Kjartansson, with the National, spends six hours playing one song. Anri Sala’s work is called Three Minutes. Camille Henrot in Grosse Fatigue “attempts to not only understand the chaos of history, but to visualise this disarray” and, while Lili Reynaud-Dewar spends time randomly moving around an exhibition, Charlotte Prodger has spent an entire year documenting a life on an iPhone.

These artists are conscious of time, how we spend it, waste it, our place in it, our history, our future and question the relative importance of time.  Antiphon, the ancient Greek philosopher, wrote in his work On Truth, that: “Time is not a reality (hypostasis), but a concept (noêma) or a measure (metron).” Our relationship with time is hardly a new idea, but is our art reflecting our greater awareness of our personal realities in time and our understanding that time is a vital tool to control and order our globalised and frankly overwhelming lives?

It is no coincidence that Antiphon so closely linked Time to Truth.  Artist, William Kentridge talks of the polyphonous voice, “different ideas knocking into each other, overtaking, we have to find a voice for polyphony, many voices, for different solutions…” 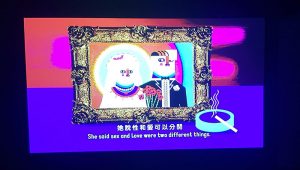 A narrative of truth can be found in Ryan Trecartin’s Item Falls which conduits our “anxieties around constructing identity” and in Al Solh’s work Now Eat My Script where the “narrator wonders whether trauma can be consciously lived, or even recorded in a non-voyeuristic way,” or in Wong Ping’s beguiling narrative, Jungle of Desire, where your sympathy eventually leaves you feeling soiled and questioning your moral judgements.

Pippilotti Rist’s 4th Floor to Mildness, shot mostly under water, and viewed from beds with comfortable pillows, invites you to relax but her narrative of truth hides in plain sight within the gap between the two screens forming two silhouettes of almost human profiles. 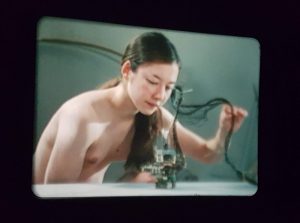 The truth of Daria Martin’s Soft Materials is hard to escape, explicitly questioning our relationship with robots (brilliantly prophetic from 2004) and now reminding the viewer of how little protection we have against the advance of AI and how easily we are seduced. Forensic Architecture shows us how easily we are lied to, questioning the truth of what is reported, who it benefits, which truth is real.

The Turner Prize 2018 shortlist is a political tour de force of film. And surely the study of politics reveals polyphonous truth?   It is probably a good idea for an organisation such as the Tate to associate with current political and social ideas, ideas that may lend the Tate credibility as a serious leader in the fine art world. But, ironically, this shortlist reveals an insecure lack of confidence as the content is overly politically correct and tips perilously close to a Sunday sermon.  As Michael Glover says in his despondent review in the Independent, watch the films and “be taught your lessons in gender politics, identity, alienation, colonial violence.”   He has apparently some nostalgia for the media grabbing irreverence of past year’s shortlists.

All of these voices speak their truth. All are different and all have a truth.  A few days of spending so much “Time” viewing so much “Truth” (some judgemental, some self-indulgent, some poignant, humble, sublime, confessional, ominous…) is overwhelming but also weirdly inclusive. If art reflects our society and as Laura Cumming comments “it would be hard to avoid the obvious intersection between these works and the maelstrom of modern times: they are like dark reflecting mirrors”, then our society is in no mood for irreverence.  “Earnestness” seems to be the “plat du jour” with an aperitif served of “Compassion”.   It is possible that all this film encourages and inspires connectivity between people that is meaningful. Potentially, this is the best we can do in all the chaos.

Strange Days is free and runs until 9th December