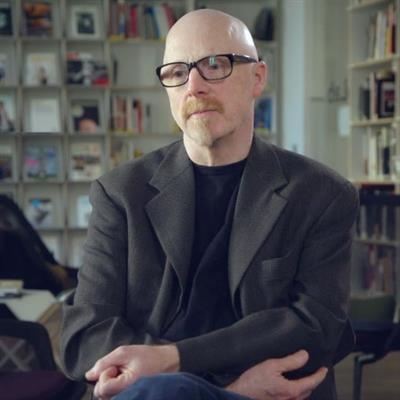 John Wynne, Professor of Sound Art at the University of the Ats London, is an award-winning artist and academic whose diverse, research-led practice includes large-scale sound installations in galleries and public spaces, delicate sculptural works, photographs that produce sound, flying radios and award-winning ‘composed documentaries’ that hover on the borders between documentation and abstraction. His massive Installation for 300 speakers, Pianola and vacuum cleaner became the first piece of sound art in the Saatchi collection and won him the 2010 British Composer Award for Sonic Art. John’s writing includes chapters in Between Art and Anthropology and The Routledge Companion to Sounding Art, and he has presented at conferences in South Africa, Korea, Denmark, Finland, Germany, Canada, the US, Ireland, and the UK.

John’s work with linguists and speakers of endangered languages includes Hearing Voices, a project based on click languages in the Kalahari Desert which resulted in an installation shown at the Botswana National Museum, National Art Gallery of Namibia, and Brunei Gallery at SOAS; it will be part of the Bloomsbury Festival in London in 2020. Hearing Voices is also a half-hour piece commissioned by BBC Radio 3 which won the Silver Award at the Third Coast International Audio Festival in Chicago. Anspayaxw, a project with speakers of one of Canada’s endangered indigenous languages, led to exhibitions at the ‘Ksan gallery in Gitxsan territory, the Museum of Anthropology in Vancouver, Surrey Art Gallery in Vancouver, and in San Francisco for the American Anthropological Association.

A year-long residency in a world-leading heart and lung transplant centre alongside photographer Tim Wainwright led to a book, a 24-channel installation and another half-hour commission for Radio 3. I Am Not the Cancer, a multi-channel sound and video installation based on women with metastatic breast cancer, showed in 9 European capitals, culminating with a final exhibition inside the European Parliament in Brussels. John was artist-in-residence at the Royal Free Hospital in London in 2016, working with liver, kidney and pancreas transplant patients and live donors for a major exhibition called Transplant and Life in the Hunterian Museum at the Royal College of Surgeons in London. Gabriel Weston in The Lancet describes this work as “thoughtful” and “especially welcome” in the context of the medical museum and the president of the Royal College of Surgeons said it was the “jewel in the crown” of what the RCS has to show. Birds I wouldn’t have heard is a 90-minute video and sound installation commissioned for the exhibition Spare Parts at Science Gallery London in 2019.

John’s first venture into theatre sound design was for Scottish director Graham McClaren’s edgy and critically acclaimed production of Andromache in Toronto, for which he was nominated for a Dora Award for Outstanding Sound Design and Composition. Nocturnal, a collaboration with filmmaker Atom Egoyan combining a camera obscura with multi-channel sound diffusion, was commissioned by Faster than Sound for Aldeburgh Music.

John’s site-specific installation practice includes a series of works exploring architectural acoustics and the porous boundaries between interior and exterior. In Frieze, his Installation no 2 for high and low frequencies was described by Daniela Cascella: "The critical shift in this installation is from apparent mimesis to a subtly unfolded artifice: permeable and open, prompting hesitation, the space created by Wynne does not display the purity of acoustic phenomena but points to the singular, changing engagement with sound that occurs at different times for different listeners."