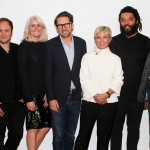 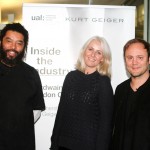 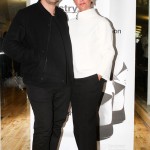 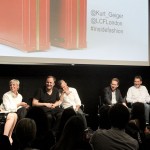 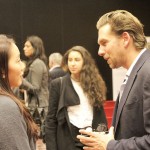 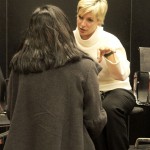 Last night London College of Fashion, in partnership with Kurt Geiger, hosted an industry-led panel discussion to mark the closing of the 125th anniversary year of Cordwainers at LCF.

Laura started things off with a confession: her friends call her the ‘shoe pig’ due to her extensive shoe collection. What is it, she wondered, that makes shoes quite so alluring?

The designers and directors each offered their take on the beauty of shoes. They were in agreement that there is something special about them compared to other clothing. Rebecca said, “Shoes are a bit of art that expresses you” and Nicholas agreed saying, “There’s an architectural element to shoe design. They’re really quite complex.”

The panel then considered beauty versus practicality. Does one counteract the other and is heel height a feminist issue? Rupert’s response to the issue is to sell the same design in different heights in order to match comfort and beauty. Marc reflected on the question from the perspective of men’s footwear, stating that women’s shoe design is being influenced by men’s in a desire to create comfort. Men’s footwear and accessories proved a key talking point for the panel. Ed argued:

“Men are the new women when it comes to a love of footwear and accessories.”

Rebecca and Marc agreed, with Marc citing the importance of social media in creating a new conversation and market around men’s footwear. Marc said:

“There is now a proper conversation available to men on a global scale.”

Bill Amberg reflected on the importance of social media to the contemporary accessories industry, naming MR PORTER as an online company that really knows how to tell the story around brands.

The panel then turned to a hot concern for the students and recent LCF alumni in the audience: the importance of nurturing design talent in order to fuel the footwear and accessories industry. Speaking from Kurt Geiger’s perspective, Rebecca emphasised the importance of investing in young designers, a view the company have proven this year through their support of Cordwainers at LCF as part of the C125 campaign.

Designers and students of Cordwainers, Nicholas and Rupert agreed, revealing their own paths to success. Nicholas commented on the importance of matching education with industry experience, such as internships, and creativity with commerciality. Rupert recounted his time spent in Italy, funded by a bursary from Cordwainers, which inspired him to move into women’s footwear. On the note of new talent, Nicholas commented that a fellow alumna, Sophia Webster, is one to watch.

The evening closed with the panellists taking time to chat to students and sign autographs, posing for snaps and offering even more insider advice.