MASTERCLUB 2018 COME AND MEET THE EXPERTS 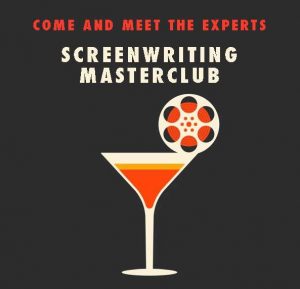 On the evening of July 12th, the current and past students of MA Screenwriting got together with other LCC students at Angel’s Chapel Bar for Masterclub, an engagement event with a range of professionals, organised by the current students. The evening was promoted by the LCC Graduate Student Fund.

The aim of the evening was to connect upcoming writers to well-established people within the world of film and TV, in order to gain knowledge and advice on how to best enter the professional world after university. 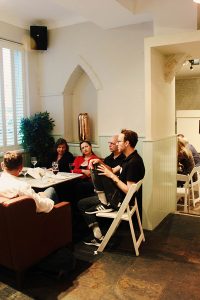 Guest David Kayser at his table 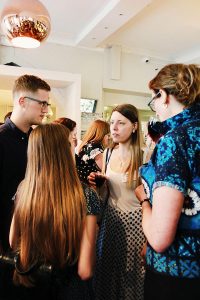 All guests were treated to a free bar and trays of canapes throughout the night.

Students also hosted a raffle with great prizes, such as tickets to shows “Dreamgirls” and “Consent” and exclusive vouchers from Final Draft, who kindly sponsored the event.

The industry professionals didn’t steer clear of sharing their expertise: literary agents talked about what personally draws them to a script and all the factors they consider before taking on a new client, despite reassuring students that a long list of credits is not essential. Plenty of people on their list are new writers, there just needs to be a balance overall. “Your heart should be in the story”, Hannah Boulton stressed. “And I usually read two spec scripts from a writer, to get a better sense of the voice.”

“A good internship can open lots of doors,” Danielle Glaze Adams said, whose first job out of university was for the production company Kudos. “But most importantly, ask companies  to be script readers. Reading scripts is everything.” 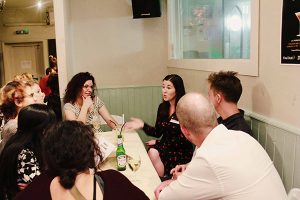 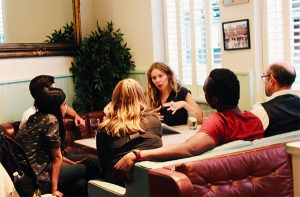 Guest Hannah Boulton at the final slot of the night

They also informed students about what their companies are currently working on and what they would love to see come across their desk.

“There’s a lack of women writing crime, I’m eager to see some of that,” Lucy Roch offered.

On a similar note, Najan Ward got into details about the aim and functioning of his company and the best routes for new filmmakers. He sees a lot of potential in writer-actor duos and of taking advantage of free platforms such as Youtube.

Finally, Philip Mattison and Emma Reeves talked about the craft of screenwriting and competitions like the annual BBC writers room, a crucial window for writers to submit their unsolicited scripts to BBC producers. The competition runs a winter contest for Drama and a spring one for Comedy. They also chatted with students about the future of TV and the new fields that are coming into it, including streaming platforms, VR (virtual reality) and games. Although Mattison stated the BBC is not quite working with the two latter ones, their potential is becoming more and more recognised.

The event has received some fantastic feedback:

“The LCC Masterclass was a terrific evening. I enjoyed speaking with and getting to know some of the writers and the layout for the evening gave everybody an opportunity to speak directly to industry professionals, which hopefully proved to be an invaluable insight into the business side of working as a writer.”
David Kayser – Literary Agent

“It was a pleasure to talk to the dedicated and enthusiastic students and alumni. The evening’s guests included top agents, producers and development execs, and was a great working opportunity for everyone.”
Emma Reeves – Chair of Writer’s Guild TV Committee

“It’s great that events like these exist, I would have loved to have gone to one when I was starting out.”
Najah Ward – Producer SLNda