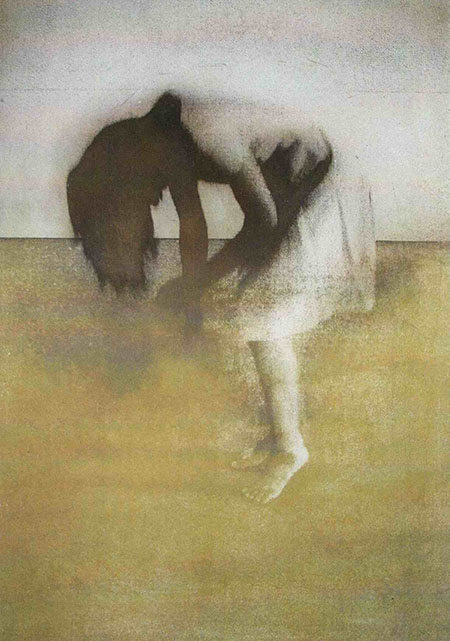 Just the title itself was enough to draw me in as I grapple with gesture, its meaning and how to convey that meaning.  Of course, there’s always a risk in going to an exhibition with high hopes but this exhibition does not disappoint.

The two artists in this exhibition both work with gesture but in very different ways that enhance and complement each other.  One is working through gesture, describing them as “physical meditations”, the other creates translucent prints on the language of gesture. 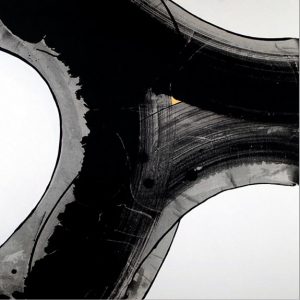 For the former, Rod McIntosh, the works themselves are the record of gesture, expansive gestures made by laying the material on the floor and using the full capacity of the arm in movement.  And the materials themselves are the sort of materials you would want to touch, delicate Chinese papers, reflective of our own fragility, used to create surfaces that hold deep dark bold Indian ink and charcoal swathes. Pausing in front of these and thinking of their performance, there is a vigour to them, but measured, creating voids on the paper that are then picked out with delicate highlights of gold leaf.

Margaret Ashman partners with dancers who are deaf and who use sign language, the movement of the body in gesture, as the way that they communicate rather than being a gestural dance that is secondary to the spoken word.  Working with these performers, Margaret videos them and then uses stills from the video to develop in the studio creating images with multi-layered meanings.  (The knowledge that these are records of an act of silent speech beyond my own norms being but one of them.)

Included in these works are also images of objects, textiles, embroideries or backgrounds made from many of the artist’s own or found photographs of interiors or exteriors. These too create a moment to pause and reflect on their incorporation into the image and the possibilities in meaning that are opened up.

I am reminded of a workshop I once took where we attempted to draw each other whilst speaking, an exercise in seeing the host of fleeting micro expressions that pass across the face in animation.  Similarly, when we move, for whatever reason, each gesture or movement is fleeting, born, transmitted then passes into the next one.  And then, also, thinking of speech itself, for these videos are a record of speech, this too, is a momentary act, full of micro intonations.

In the print studio Ashman makes these images her own, weaving a light filled delicate magic in to these captured moments.

Thus the two sets of work speak clearly of the deep mine of possibility that is gesture and its embodiment.  The use of photopolymer print, largely emptied of colour through the use of light reveals the ephemerality in the gesture through its record; the deep black of the gestural records reveals the pure physicality and potential theatricality of the gesture.

So the contrast is between slight means and heavy means, between physicality and ephemeral, between light and dark, between the sides of our nature that we slip between so easily, both a record of the momentary, each movement within the repertoire of our embodied selves but each one unique.

For information on The Muse gallery and how to get there: