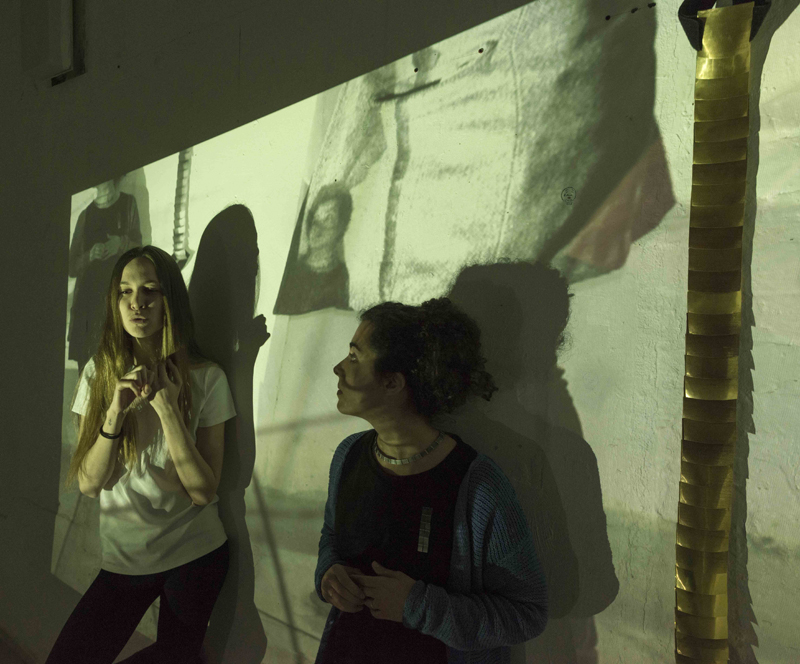 Throwback to Thursday 8th of March 2018. Door is open and glooming lights are coming out. Inside ‘The Morgue’ at Chelsea College of arts resides the ‘Hybrid’, some people walk by the gallery space and intrigued by the space transformation stop by and sit down by the entrance. In average ‘CAPAS’, a multi-sensory performance organized by Marie L. Gerard who studies on the MFA Fine Art Course at Wimbledon, welcomed about 45 people throughout the day.

The Hybrid is a wearable brass sculpture meant as an extension of one’s skin created by Mar Juan Tortosa who is currently undertaking a PhD at Universitat Politecnica de Valencia, Laboratorio de Creaciones Intermedia (Fine Arts University, Sculpture Department).  Velcros on each side of the object can be attached to multiple parts of one’s body forcing the person who wears it to re-assess one’s environment and the way one’s evolves in it. The Artist Carlos Sebastia installed multiple projections deformed by acrylic sheets leaning against each other. The whole gallery space expands infinitely in a range of purple to green palettes. The lighting changes in function of the performer’s movements.

From 2pm until 8pm, Panama Diaz performed every two hours. From laying on the floor of ‘The Morgue’, she started her performance performing ritualistic washing movements as an act of purification before she goes on exploring the space from the perspective of a person deprived of her senses. Panama Diaz went on exploring every single corners of ‘The Morgue’, examining all the surfaces and how these reacted with the constant changing lights. As she explored the room, she found the ‘Hybrid’, interested by its texture, noise and shape she started playing with it as the object reflected the projected light in different directions. She examined it first as a curiosity she grew to comprehend. Slowly she adopted the Hybrid as a second layer, a second skin. She attached it around her neck letting the length of the object rest first on her torso and secondly on her back whilst she kept exploring the room. The Hybrid, attached as such to the performer, both seem to be in a perfect, almost playful, symbiosis. Interpellated by the second attach at the extremity of the object, Panama wrapped it around her leg. The object attached to her body restricted her movements. She walked around slowly in round at a slow pace. The object is now not playful anymore but became a second skin that suddenly rebelled against her. She limped, bent in half. The object forced her to slow down. The restrictive ‘Hybrid’ calls her back to the floor where the performance all started. 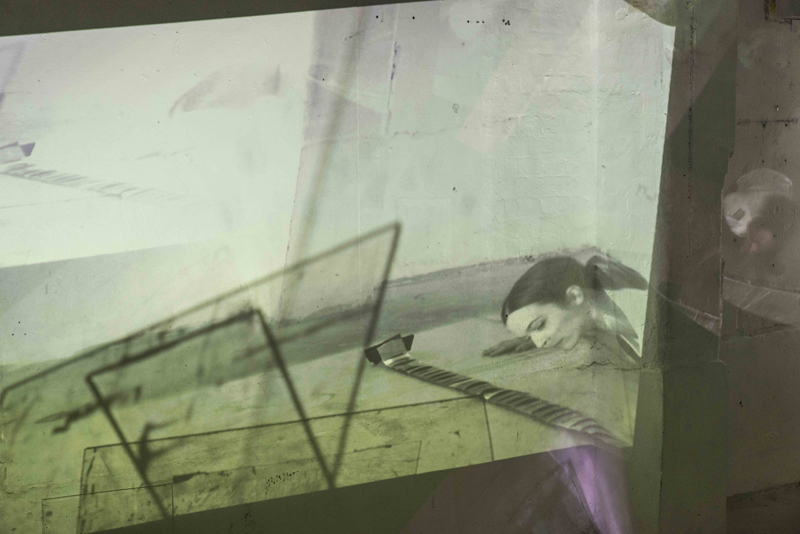 The gallery itself references to life and death, the light installation reflecting itself on the walls infinitely is an ultimate reference to the eternal life.  This performance makes undoubtedly think of the ‘Riddle of the Sphinx’ – “What walks on four legs in the morning, two legs in the afternoon, three legs in the evening, and no legs at night?”. Although a few nuances are to observed from the original enigma. First the performer through her washing seems to be coming back to life and reassess her surroundings almost like a toddler. She then discovered her adulthood and thanks to the Hybrid seems to evolve securely through the gallery space. When she attached the object to her neck and leg she appeared to be walking like an elderly person to then go back to resting on the floor.

The light installation gave to the whole performance an un-temporal feeling playing with the boundaries between the digital and the physical world.