Since July I’ve been working as a “Researcher in the Archives” in the Archives and Special Collections Centre. I’ve been enjoying the project immensely, and am excited about how the work’s developing, but haven’t made any of it public yet. This is because it’s impossible to discuss it in any detail without also disclosing a personal health issue. But I’ve recently given presentations about the residency at the launch of UAL’s Comics Research Hub, and at an international conference, so it feels like time to start showing this stuff. 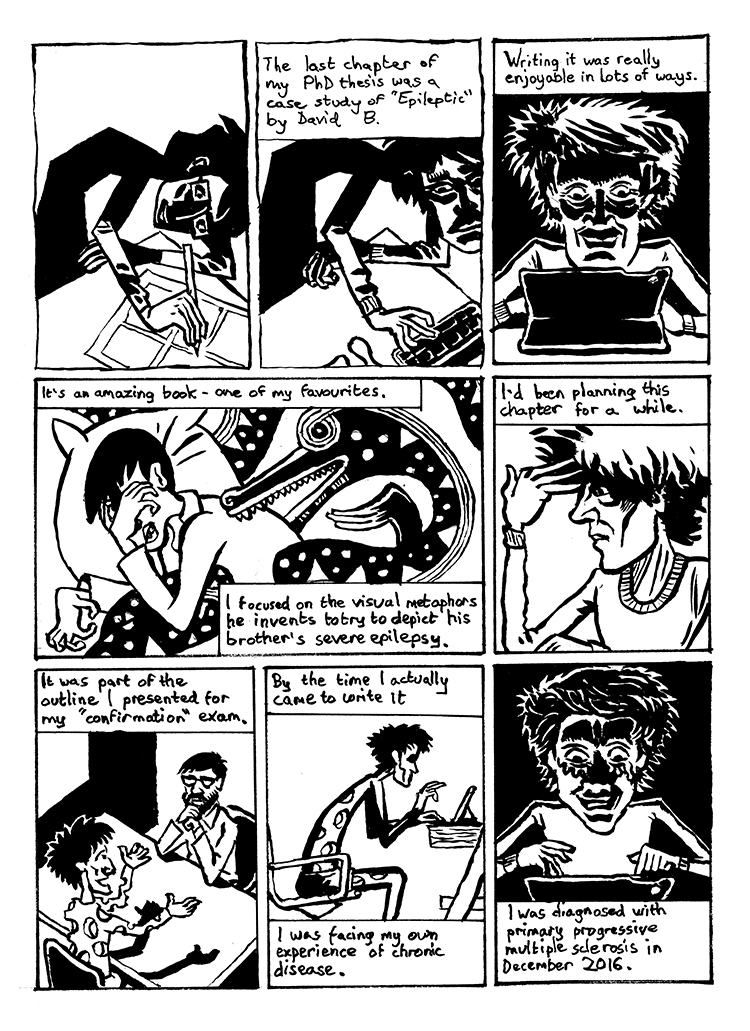 Unsurprisingly, the question of how artists can use narrative drawing to conceptualise and express traumatic experiences of disease took on an acute personal salience while writing this chapter. I didn’t mention my MS in the thesis, but I knew that I wanted it to be the focus of my next project.

My proposal for the residency focused on the Les Coleman Collection, which contains a huge range of mostly American and European underground and alternative comics. My plan was to analyse the metaphors that the artists in this collection had used to express their own experiences of disease or disability, and then develop those metaphors in new drawings that reflected my experience of coping with MS.

In metaphor scholarship, this kind of analysis is carried out with a large corpus of texts. The idea is that by observing patterns of metaphorical expression used by a large number of people in a variety of contexts, you can identify underlying patterns of thought. But I quickly found that the material in the Coleman Collection wouldn’t support this kind of analysis: although it contains lots of autobiographical work, there are few examples of artists talking about experiences of physical disease or disability. What is common, however, is artists using these topics as metaphors for other types of trauma, as in this excerpt from Schizo #1, by Ivan Brunetti: Here, Brunetti’s fictional loss of control of his “excretory functions” is a metaphor for his real problems with social anxiety. It’s almost a complete inversion of my own experience: I’m fortunate not to suffer from the kind of anxiety Brunetti expresses here, but the fictional vehicle he uses to communicate it does describe a common symptom of MS. The first drawing I made for the project saw me “invading” Brunetti’s comic: I won’t reproduce the rest of that page here, as it’s not the most pleasant thing I’ve ever drawn. But making it felt like a useful pointer towards a way of producing artwork about my disease: adopting the expressive habits of another person allowed me to confront some of its most unpleasant aspects more directly than I might have been able to if using a less mediated voice.

So I began to form a plan in which I’d look for work that offered a register that I could employ to discuss different aspects of coping with MS. An artist I’m currently working with is Mark Beyer, whose work appears in the avant-garde anthology Raw and a number of hardback collections in the Coleman Collection: 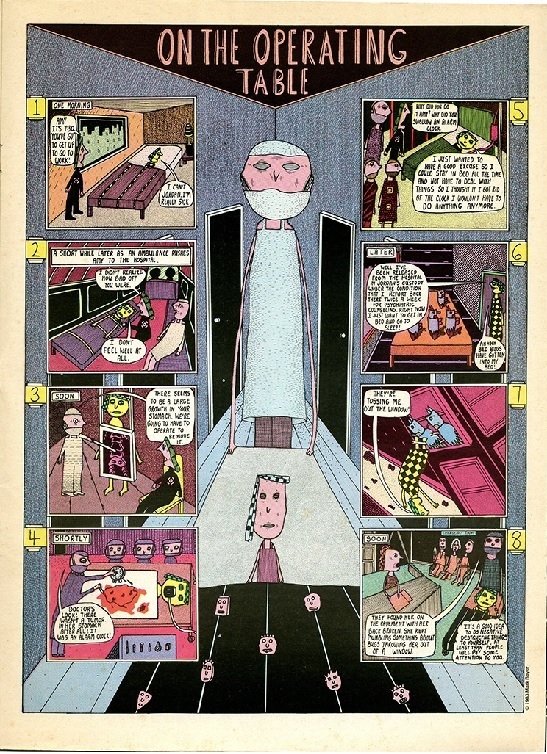 In Beyer’s work, “There’s no plot, per se, […] just a series of hazardous events that eventually stop.” The picture of a random and nonsensically cruel universe his comics present seemed like an appropriate way to capture a feeling that inevitably forms part of the response to the diagnosis of a chronic disease: “why me?” 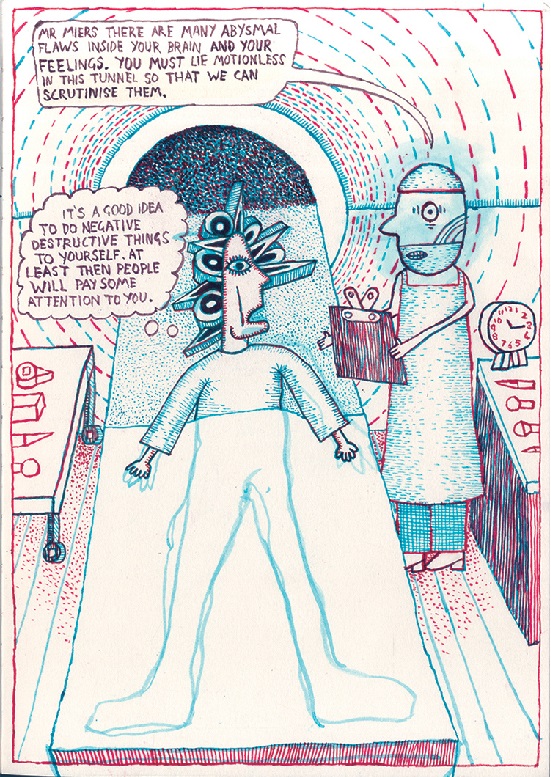 I’m using Beyer’s tone and style in a story about aspects of diagnosis and treatment. As part of a medical trial, I take tablets three times a day. Doses should be at least four hours apart, and only water consumed for one hour before and two hours after each dose. Next August I’ll find out whether I’ve been receiving placebos or disease-modifying treatments. Participation can sometimes feel like being the butt of a cruel joke. This page reflects the dislocation I felt when going for an MRI scan in a hospital run by a private healthcare firm who are contributing to the trial’s funding. By contrast, my previous scan, on the NHS, was in a portakabin in the hospital car park: This part of the project is influenced by the ideas in Simon Grennan’s A Theory of Narrative Drawing. His discussion of the notion of “intersubjectivity” provides a way of theorising the strategy of “using another’s voice to talk more openly about myself”, and the “drawing demonstrations” that conclude the book set a precedent for this kind of practice-based work in comics scholarship.

The other strand of the project has emerged directly from the material in the archive, rather than being framed by a set of pre-existing intentions. The Lindsay Cooper archive is a recent enough acquisition that it’s still in the process of being catalogued. 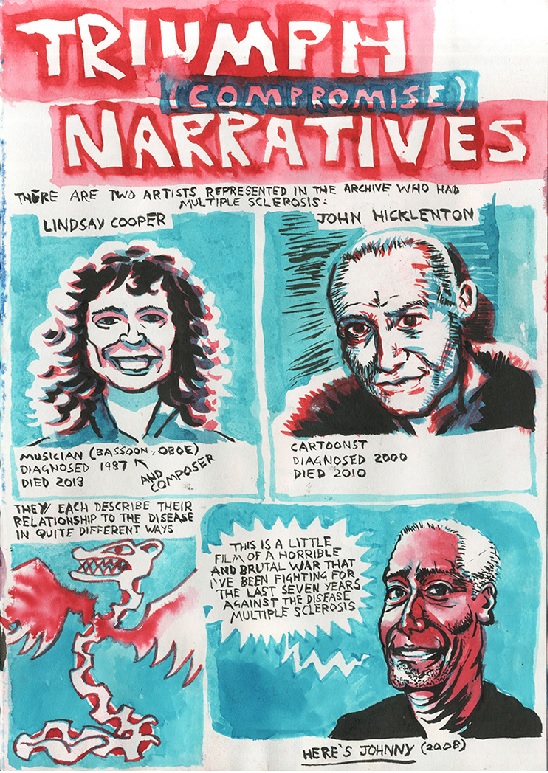 The collections of mainstream comics in the ASCC contain just a few examples of work by John Hicklenton, none of which addresses his MS. But the library does contain a copy of the documentary Here’s Johnny, in which he talks frankly about the disease.

Lindsay Cooper’s archive contains extensive written material, including diaries and texts intended for publication, some of which discusses having MS. The drawing below uses childhood photos of Cooper to illustrate a passage from her diaries: 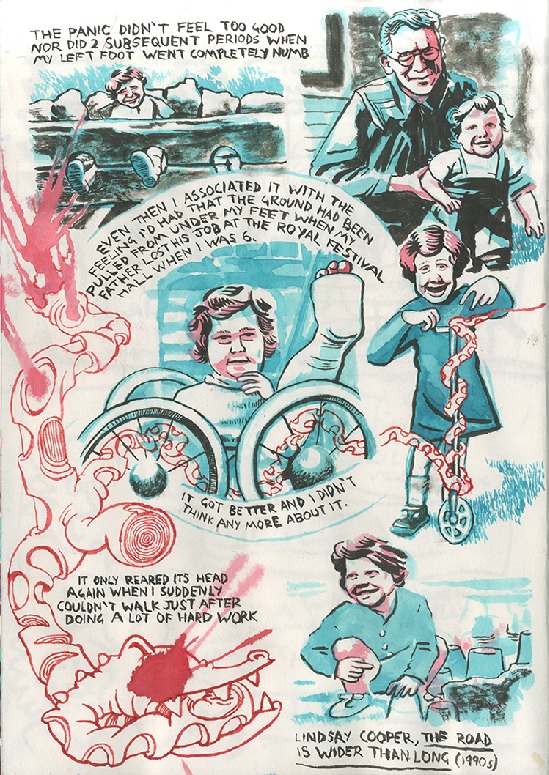 This aspect of the project returns to my initial aim of analysing the way metaphors are used to understand disease, but with an in-depth case study rather than a corpus drawn from a variety of sources. These drawings will be used to frame and contextualise the more anecdotal and fictionalised work described above.

The project will conclude with a symposium in spring 2019 at which medical professionals, artists and academics will discuss ways in which drawing and storytelling can be used to present and understand experiences of disease, and the artwork introduced here will be presented publicly for the first time. More details to follow!