Today marks the opening of #Dress4OurTime as part of the Our Lives in Data Exhibition at the Science Museum, on display 17 August until 4 September 2016.

The dress, by award-winning artist and designer Professor Helen Storey, London College of Fashion, UAL, was made from a decommissioned UN refugee tent, which once housed a family from Jordan. Using the power of fashion and technology to create an innovative ‘wearable digital canvas’, Helen Story communicates some of the world’s most complex issues with elegance and energy to engage people with scientific data. 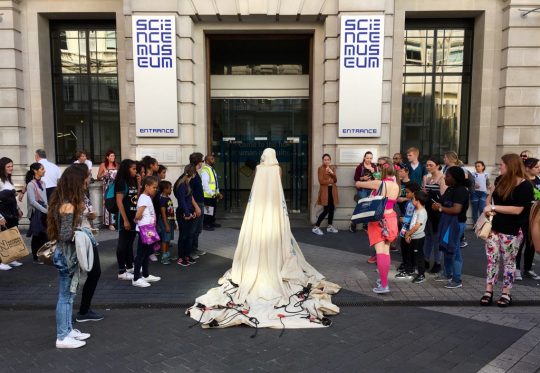 Dress For Our Time arriving at the Science Museum, part of #OurLivesInData Exhibtion, August 2016

This time, at the Science Museum, the dress visualises and projects the latest data on migration from United Nations High Commissioner for Refugees (UNHCR), released 20 June 2016 – a record 65.3 million people currently displaced worldwide and 21.3 million refugees. There is also a new video, alongside the dress, capturing the journey of the dress so far.

From Glastonbury to Geneva, Dress For Our Time, is on constant tour around the globe and you can now catch it in London at the Science Museum. The beauty of the ‘digital dress’ is that it can be regularly updated and each stop around the globe where new or updated data will be projected onto the dress. 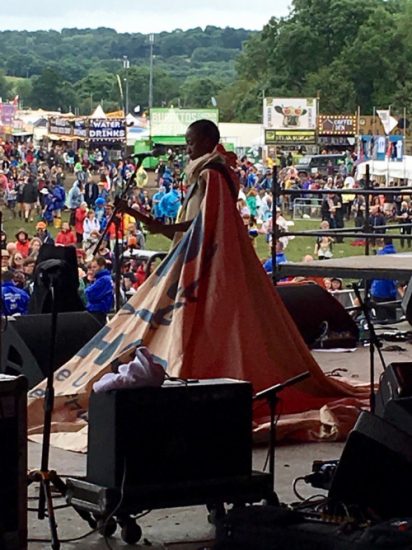 Speaking to Professor Helen Storey at the Science Museum opening, she said ”This dress embodies  the kind of energy and collaboration the world needs at the moment. We have so much incredible data collected by scientists across the globe and it’s the job of the creative arts to communicate and visualise the issues and get people thinking.” 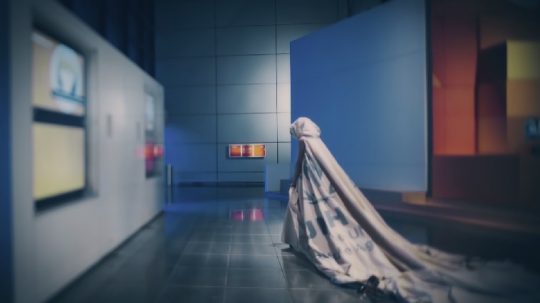 Dress For Our Time arriving at the Science Museum, part of #OurLivesInData Exhibtion, August 2016

The tent was gifted to the Dress for Our Time project by the UNHCR and working with Holition, the creative agency who worked on the digital projection, the team analysed the data and looked at a number of ways to animate what often gets lost in numerical data; the reality of the people behind the numbers.

Helen Storey, Professor of Fashion and Science at London College of Fashion, UAL, said: “Worldwide, one in every 113 people on the planet is now either a refugee, internally displaced, or seeking shelter – but numbers mean nothing, if they don’t affect you. This project uses the power of fashion to help us connect to the previously unimaginable and asks how each and every one of us can remain a humanitarian in such a time of change.”

The animation is formed of points of light, each representing one hundred human lives and illustrates the journey each one takes in search of a better life. The lights flow from six points, depicting the continents where the refuges have moved from, before populating the countries in which they find shelter. The image that emerges is not a world map of countries but a ‘movement map’ of human migration. 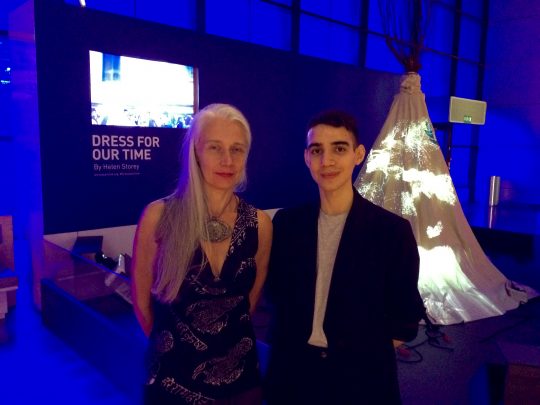 Helen Storey and Miguel Ceballos at the opening of Dress For Our Time at the Science Museum, August 2016

Miguel Ceballos, Creative Technologist at Holition on the Dress For Our Time project team and 2016 UAL London College of Fashion graduate from MA Fashion Media Production, worked with Helen Storey to animate the data, he commented:

“Every decision has an impact for the person seeing it here. Human migration is not a straight line. We wanted to make the numbers reflect people’s lives and movement. It had to be visualised as close as possible to real life which is more cyclical, moving in different directions – not too different to a flock of birds.”

Originally from Colombia, Miguel Ceballos, spoke about his own migration to London: “I came to London specifically to study the MA Fashion Media Production at LCF. UAL is full of creative spirit and the bond between lecturers and students gives us insight, skill and technique as well as connections to go on into industry.”

Dress For Our time will run alongside the Science Museum’s Our Lives in Data exhibition, which investigates the rapidly evolving role of big data in all our lives and how it is being used to transform the world around us.