Essential coronavirus info We are continuing to welcome our new and returning students. Your safety is our first priority.

On the Occupation of Space 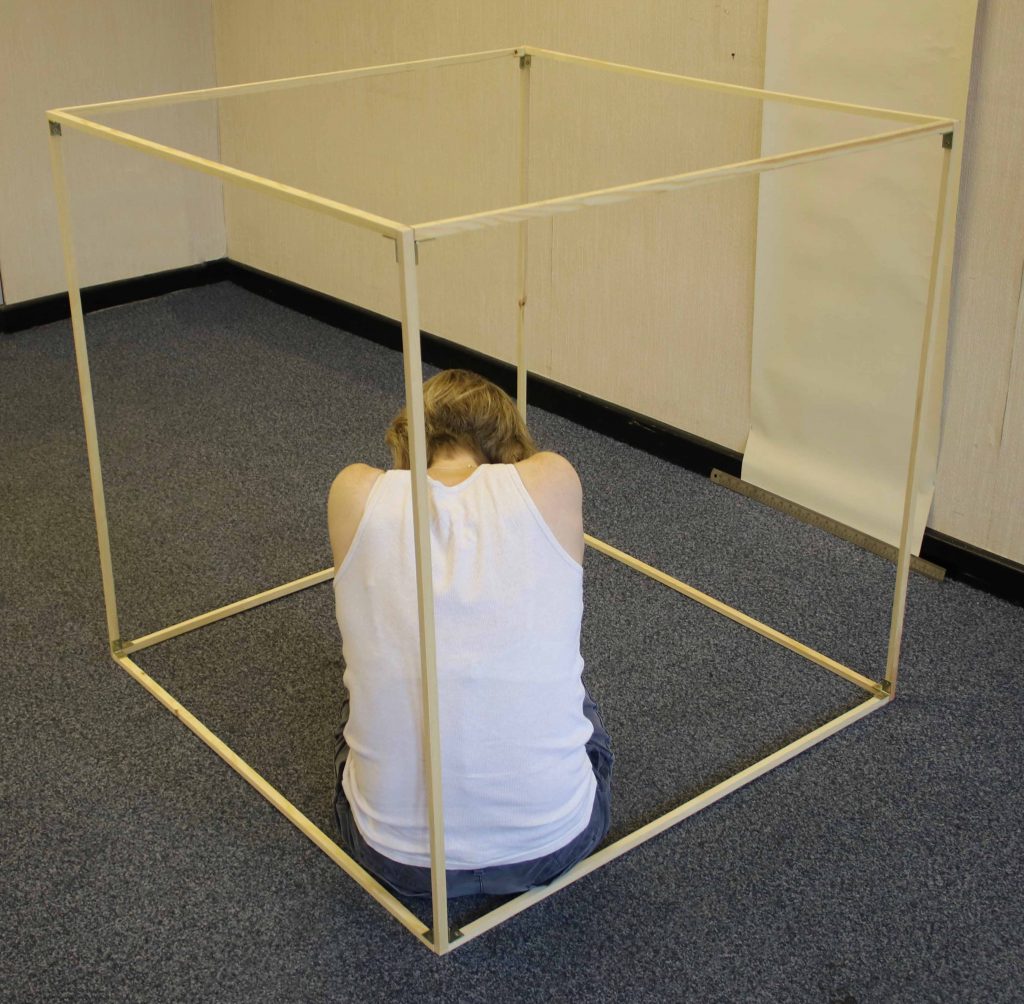 ‘One of the things that came from my involvement with feminism in the seventies was a very strong belief that my sensibility is determined by the fact of my being a woman, but that I don’t want to talk about women’s issues through my work.  My work is informed by cultural and social conditioning, but not explicitly.’ – Rose Finn-Kelcey, 1990[i]

Today (12 September 2017) I got on the Bakerloo line and there was one seat free.  It was between two largish men, one of whom had chosen to dispose himself so that only a skinny person could slide in.  As I slid in, I made a decision. I sat back with my shoulders open, holding my book so that my elbows were loose at my sides and my legs in line with my shoulders.   I simply relaxed into occupying the amount of space that my mass justifies.

Lately I have been thinking a lot about the occupation of space.  I have been surprised to discover that I occupy so little of it (about one-twentieth of a meter cubed).  And I have been aware that when I model and stand in a way that takes up more space than my mass justifies, this feels strange.    I have made moulds of myself using chicken wire and been cross that my poses are all so passive. I have attempted to draw myself 10% larger than normal and ended up back where I started.

I am currently reading “Women Making Art” by Marsha Meskimmon[ii].  Amongst other things, this sets out how women have a particular approach to corporeality that is in part born out of our historical position as object rather than subject, and that when we move into making art we become both simultaneously in a way that men do not.

Can I really avoid then considering whether there is anything specifically different as to how I occupy space as a woman?  Is it genuinely the case that my approach to corporeality differs and that this corresponds to how I have been socialised, because society values women and men differently, characterising this through dividing up modes of being that are then allocated as masculine and feminine, superior and inferior?

As with many I suspect, I have become less willing, no, I have felt less able, less socially acceptable, to specifically identify as feminist (even when, to all practical extents, I am).  As if there is something shameful in believing in the political, economic, and social equality of women.  So I was intrigued to read the quotation from Rose Finn-Kelcey above.  Even more intriguing is the work label for “The Boilermaker’s Assistant; documentation” at the same exhibition: 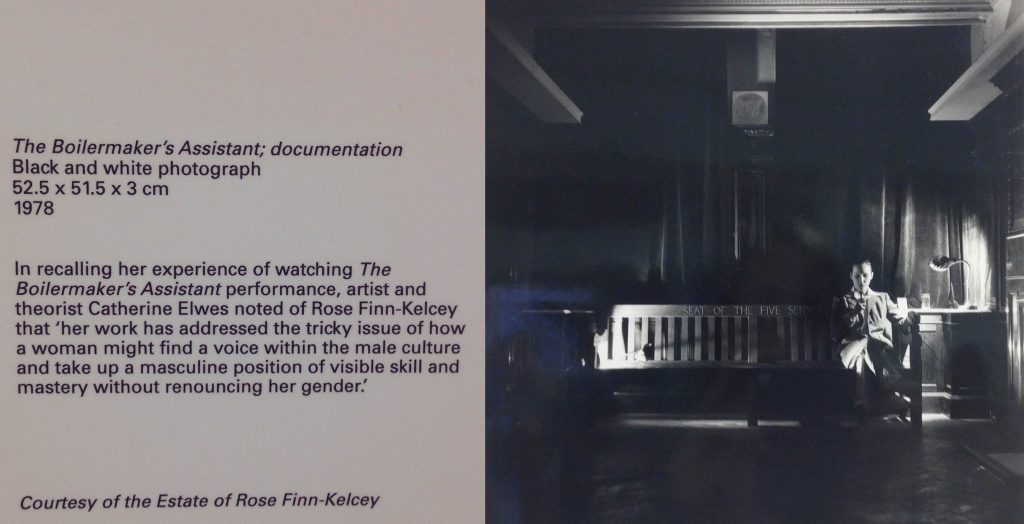 That the occupation of space can be a feminist issue I do not doubt.  Since I started talking about the occupation of space I have had some interesting discussions and it is clear that for women this can have a very different meaning, frequently related to personal safety and entitlement to their own bodies, let alone an equal recognition for their contribution, or right to space.

For me I think the refusal of the label comes down to an unwillingness to be placed into a new box, swapping one box of “expectations of women” for another.  When what I may be best at is choosing the particular issues I want to address and focussing on those in a way that nudges out the boundaries on what I am supposed to do or be, or even be good at.

It is certainly not because I think that the job is done.  It is more that I think the job is split into multiple components many of which cannot be achieved through legislation.  Quietly getting on with the business of expecting to be treated with normal human respect is an option that is open to all of us.

Reading “Je, Tu, Nous” I have found a concept of self-assurance that I find useful:

Self-assurance, the being who is self-assured in the world, means: to be in the world, no longer foreign or enslaved to it but as women to feel at home and secure in oneself[iii].

We can never pretend that the sex thing is not there.  It is part of who we are, it is the animal that sits beneath our conscious awareness.  But the fact is that we do have conscious awareness and therefore have the right to expect that each other that we encounter (and ourselves too) should act with agency.  Wisdom is not a set of tick boxes to learn or meet, it is born in fluidity and uncertainty and maintains its balance with those two forces, against a clear-eyed understanding of human nature, on an ongoing basis.

I am coming around to the idea that perhaps my appeal is not to equality in some neatly shared up sense, an approach that plays into the hands of those that treat society as a zero sum game, but in the form of ethics that underpins how I pass through the world.

[i] Noted on 26 July 2017 from the exhibition introduction to: “Rose Finn-Kelcey: Life, Belief and Beyond” at Modern Art Oxford until 15 October 2017

Want to write an article for the blog?

Are you a UAL MA, PhD student or alumni and interested in writing an article for the Postgraduate Community Blog? Want to share results of a recent project, residency, or an interesting event you have visited? Then get in touch!  90% of the articles on the blog are written by postgrads for postgrads.  There are also lots of amazing events coming up across the six colleges for you to review and feedback on.