Text and images (except where stated) by Anastasia Kuchta, MA Publishing, LCC 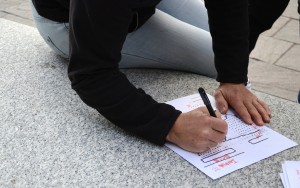 Stephen Farthing explained his idea—to project perceptions of the world onto the fountain beds at CSM in chalk. Mapping the world with chalk on such a grandiose scale is reminiscent of the Anglo-Saxon geoglyph of Cerne Abbas Giant in Dorset or the Uffington White Horse in Oxfordshire.

The students were split into five groups and given a particular portion of the world to draw. Together, each group would build their piece of this dynamic world map. Connecting pieces of the world with other groups proved the tricky part. After the chat with Stephen, each team set off to examine the given grids and map how the map would be accomplished.

A 10AM meeting time on Sunday…most students gathered in YumChaa for their morning coffee or tea. Around café tables, students introduced themselves, their graduate course and began preparing for the big draw. After mapping the draw on paper, the students went outside to translate their plans onto a much larger scale. Despite the chill, the sun (luckily) shone throughout the draw. 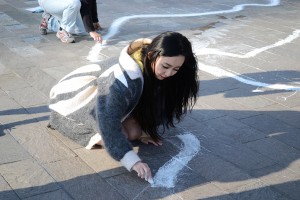 The actual drawing commenced at 1PM. Students grabbed chalk and began making light markings on the fountain beds, outlining their respective parts of the world. Marina—who is working on her MA Fine Arts degree at Chelsea—realised while chalk is a limiting material, each student brought a lot of stylistic diversity to the way they worked. Marina found it lovely to collaborate and work with so many people from around the world after only one week of being on the course.

The project was not about the outcome, but rather was a piece of performance art and was filmed—on the ground and from the sky. After ample progress, a drone flew high overhead to film the work from the sky. The largess of the canvas could only be captured by this god’s-eye viewpoint. Dimitri Yin—a MFA Drawing student at Wimbledon—noted the cathartic experience of utilising such a tremendous space. 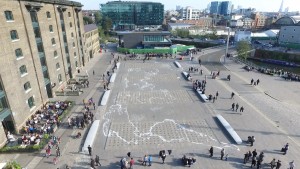 Two hours in and the collaborative drawing had come to an end. The drone flew overhead again, to capture the final product and subsequently take a photo of the participants standing in Africa. Crystal—an Australian Costume Design student at LCF—was on the team who drew Australia. Crystal felt that Stephen’s idea had become a piece of everyone’s, each participant contributed their own perspective and style of drawing to the project. Crystal’s perspective of Australia was unique—she stated that, “it was nice drawing the coastline of my home.”

Stephen wanted to turn the fountains on after the drawing was finished, giving the event a beautifully romantic ending. Due to fears the chalk would clog the fountains, a mechanical scrubber was used instead to erase the “world”—or rather, our projections of it.