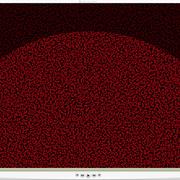 Studied Fine Art at the Slade (1999) and Cooper Union, New York (2001). Gained an MA in philosophy at Greenwich University in 2011 studying under Johnny Golding. Became a Lux Associate Artist in 2011.


My work explores the potential of thought to describe and make present in language that which cannot be experienced. Working mainly with sound, performance and film, my work draws together immersive narratives that incorporate elements of spectacular entertainment and moments of enlightened consciousness that come about during mundane daily tasks.

My recent video work presents characters who are involved in telling stories, either through dialogue with other characters on screen or by monologue delivered to an unspecified interlocutor; the stories told, in some way relate to the structure of the spectacle that they themselves provoke or are made present in. For example in ‘Triangle Vision’, 2013, the speaker describes an extraordinary experience in anecdotal style. The speaker is an actor and the experiences she describes were written by me based on visions induced under hypnosis; essentially a kind of vivid lucid dreaming. The audience follows the ‘story’ of the vision as it builds and disintegrates meaning. In fact what is followed is not a consequential narrative at all but a sequence of images produced in the mind of the audience and strung together by the enthusiasm and emphasis of the performer.

Parallel to my studio practice I undertake research into non-representational theory, fuzzy logic and unstable media. I have conducted extensive research into collaboration as a sensuous practice through the optic of the work of Heidegger, Gödel and Lyotard.