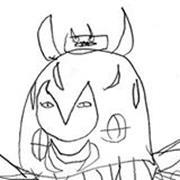 Kelly Chorpening is an American artist who has lived in London since 1999. Since working as an archaeological illustrator in India in 1993, she has dedicated herself to drawing, both as a practitioner and educator. She is co-author of the UAL Drawing Qualification units, and since 2006, Course Director of BA (Hons) Drawing at Camberwell College of Arts.

She is currently a co-investigator in a practice-based research project entitled ‘In- and outside- writing’ (funded by Opak, Belgium), an investigation into when the creative acts of drawing and writing are closest. Project outputs include a large-scale exhibition of the same name at Voorkamer in Lier, Belgium, and two publications in 2012 - a limited edition artists book published by RGAP, UK, and the Opak cahier, published by ACCO, Belgium.


Kelly Chorpening’s recent experiments with ways of materialising the form of language in order to test the fundamental processes of naming and identification that occur in both drawing and writing. Basic forms and gestural marks resembling letters, words and utterances are articulated along a stretched horizontal format, creating an experience of the work akin to reading.

In 1968, Michel Foucault, described Rene Magritte’s ‘ Ceci n’est pa une pipe’ as “simultaneously present and visible, image, text, resemblance, affirmation and their common ground.” Whether on the page or on the wall, the work explores this area of ambiguity between object vs. word, drawing vs. writing.