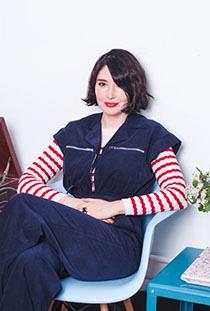 Ferguson works as a filmmaker, curator and lecturer. She has made films for fashion designers, brands and musicians including Chloé, Selfridges, Sinead O’Connor, Lady Gaga, Richard Nicoll, SHOWstudio, Charlie Le Mindu, Katie Eary, and Domino Records. These films have been featured on MTV, Nowness, Dazed Digital, Twin, the BBC and in Vogue. Her experimental film work has been selected for film festivals, screenings and group shows around the world including OneDotZero, Aesthetica Film Festival, the 59th Berlinale, the V&A, the Pompidou Centre, ASVOFF, and Birds Eye View Film Festival at the BFI.

Ferguson began curating the annual Birds Eye View Film Festival’s ‘Fashion Loves Film’ strand at the Institute of Contemporary Arts & British Film Institute in 2008 where it continued annually until 2011. Since then she has been working with the British Council & The British Fashion Council as a curator and consultant specialising in the emerging genre of fashion film. Her work with the British Council has included visiting cities such as Sarajevo, Lagos (Nigeria), Jakarta, Beijing, Manila, Lisbon and Ljubljana giving talks, curating screenings and hosting filmmaking workshops with local creatives.

In October 2012, she curated an extensive fashion film exhibition called Dressing the Screen, which opened at the UCCA in Beijing. This exhibition also toured to the ICAS in Singapore in September 2013 and was recently been re-commissioned for a Moscow show that launched in October 2014. My work with the British Film Council includes involvement as a member of a curatorial panel creating a new seasonal film initiative called Fash/on Film. The Film Festival takes place at Somerset House over London Fashion Week.

She also works as a fashion film lecturer at London College of Fashion and visiting practitioner at Central Saint Martins. She has been invited to talk about my practice and the genre of fashion film at various symposiums and film festivals including the Budapest Fashion Video Festival 2010, London College of Fashion Symposium 2011, La Jolla International Fashion Film Festival, San Diego 2013 and the ADF Moving Image Symposium, Cologne 2013. She also hosts filmmaking masterclasses and have been invited to do so for Colectivo YOX in San Sebastian 2012, a Stylist magazine lunchtime masterclass and Sunderland University.


My research is focused on the future of fashion communication, particularly looking at how the digital revolution and the emergence of fashion film is changing the remit of fashion imagery as we know it. It is based on my experience as a filmmaker, as a curator of screenings with panel discussions, direct peer to peer discussions and extensive in-depth research undertaken for the Dressing the Screen exhibition.

Other areas of interest include research into the hyper-sexualisation of fashion imagery, the need for better diversity in fashion, beauty sub-cultures & brands and more conscious image making by the practitioner. I am also researching on how to communicate messages via the fashion image.

As well as various upcoming film commissions, I have researched and curated the third installment of Dressing the Screen – The Rise of Fashion Film in Moscow in October 2014. I also curated specialist screenings for Birds Eye View Film Festival at the Institute of Contemporary Arts in London in April 2015.